Posted in: Disc Reviews by Brent Lorentson on April 20th, 2017 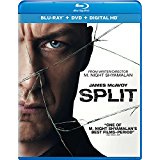 When it comes to writer/ director M. Night Shyamalan, it’s hard to find a more polarizing director between film critics and film geeks. I was a fan up until he did The Village. It’s not as though I “hated” the film; I just was getting sick of the gimmick plot twists that seemed to go hand in hand with his work.  As he continued to release films, I just would shrug at the trailers, and my enthusiasm for his films quickly declined.  For me Unbreakable has grown to be my favorite work of his, which is funny to me because the first time I saw it I had a hard time deciding how I felt about the film.  It was a comic/ superhero film that showed us perhaps what it would be like in the real world if some regular Joe realized he was perhaps meant for something greater.  It’s been 16 years, but Shyamalan has finally released a film in my opinion that can stand toe to toe with Unbreakable, and it’s with his new film Split.

Split is a return to form.  Gone are the big budgets and special effects. What Shyamalan delivers is what got us to appreciate him in the first place: great real-world characters caught up in an extreme circumstance. Kevin (James McAvoy) is not your average guy, at first glance he may seem normal, but trapped inside are 22 other personalities who have their own agendas and are wanting to take control of his mind and body.  Why he isn’t locked away in some padded cell is a question that is never answered to my satisfaction in the film, but if he were locked away, there wouldn’t be much of a film, so I suppose I’ll have to let this slide.  For Kevin and his numerous personalities there is something frightening about to occur: the rise of a new personality, one which has been deeply suppressed and is possibly the most dangerous of them all.

While Kevin and all his personalities are trying to work things out, Dennis, one of the more controlling of the personalities, kidnaps three young girls and holds them captive in his home.  Despite what Dennis may want, the other personalities have seemed to have agreed the girls are not to be harmed and are to be a gift to this new identity about to emerge.

Casey (Anya Taylor-Joy) is one of the girls who have been captured. She’s a bit of a social outcast, but as the film plays on we are given flashbacks that fill in the blanks to why she is the way she is. This is the first film I’ve seen Taylor-Joy in since last year’s indy-horror smash The Witch. Already I was impressed with her work, but the performance she delivers in Split manages to surpass her previous debut.  This is a very nuanced character, and the way she handles the material is what elevates this film from your typical thriller.  How last year’s 10 Cloverfield Lane was a game changer to the genre, Split sits right alongside it, and frankly I believe these two would be a perfect double feature together.

To be clear, though, this is McAvoy’s film. This is the film a decade from now we’ll still be discussing his performance and even break it down as to which personality was his best.  His interactions with his shrink, Dr. Karen Fletcher (Betty Buckley) are some of the film’s lighter moments as we get to play along with her as she attempts to decipher which personality she is talking to and which is the one sending her cryptic emails.

Though the film was shot on a meager budget of $9 million, it would seem the budget restraints seemed to only fuel the creativity of Shyamalan, and keeping the locations to a minimum helped allow there to be tension in the film, as though we to were trapped with the girls and slowly piecing everything together.

Personally, it’s the film’s final act that has me a believer that Shyamalan has his magic back.  We’re not here to spoil things, but I will say this is a film that will have you talking long after the credits have rolled.  Just as he did in his earlier works, Shyamalan has created a film that with each viewing after the fact there are more pieces you’ll find to his cinematic puzzle.  Personally my favorite is a certain piece of music that plays in the film’s final scene.

Split  is presented in the aspect ratio 2.40:1.  The 1080p image is arrived at with an AVC MPEG-4 codec at an average of 34 mbps.  Perhaps the best way to describe this is almost too polished.  Everything seems to be on point: the detail of the rooms the girls are trapped in, down to the complexion of their skin, to even McAvoy’s bald head, there is so much detail captured I feel it’s almost too much. There is a yellow tinge that gives the layer the girls are being trapped in a very off-putting look, while in the real world there seems to be a bit of a blue hue, though with the flashbacks that Casey has these seem to be warmer despite having the hint of yellow as well.  There were some slight noise issues, but it wasn’t too distracting. There is a moment towards the end where it seemed the saturation may have been a little off as Casey’s cheeks seemed a bit off-color, but besides that quick shot there was nothing distracting of note.

The DTS HD-Master Audio 5.1 track is subtle but has a great dynamic range.  Sound is vital in this film, from hearing the voices from outside the room to the scenes of people on staircases or moving about in the halls.  When the doctor meets the new personality in his basement, the growls and the breathing, are an excellent use of sound to create a “monster”. Music plays just as pivotal of a role here and is excellently executed.

The Making of Split: (9:50) Interviews with the cast and crew talking about the experience and secrecy that came along with working on the film.  We also get a bit of a look into his process for picking the people Shyamalan is working with.

The Many Faces of James McAvoy: (5:38) McAvoy discusses the challenges that came with a role with so many distinct personalities.

The Filmmaker’s Eye: M. Night Shyamalan: (3:40)  Members of the crew and Shyamalan himself discussing how he knows exactly what he wants with the film.

Alternate Ending and Deleted Scenes:  The alternate ending really did nothing for me, but the deleted scenes offer up a bit more to the work that Dr. Fletcher was doing.

This is my second time watching the film, and it’s a film I appreciate more this time around.  This is a smart thriller, and we don’t seem to get enough of these anymore, especially at the caliber of Split.  This is a fun time at the movies and even more so if you’re curled up at home with the lights out.  Hopefully M. Night Shyamalan stays the course and continues to give us this kind of high-tension excitement for many films to come.

Brent Lorentson is a horror writer and film critic based out of Tampa, Florida. With a BA in Digital Film, he co-wrote and co-directed Scavenger Hunt. His short stories have appeared in various horror anthologies. In 2019 his short script Fertile Blood will be a part of the anthology horror film Slumber Party. He is currently working on his first novel A Dark and Secret Place set to be released in late 2019. Favorite Films: Taxi Driver, Fight Club, I Saw the Devil, The Wild Bunch, Dawn of the Dead, A Clockwork Orange, Pulp Fiction, Heathers, The Monster Squad, and High Fidelity.
Tuesday Round Up: April 18, 2017 Veep: The Complete Fifth Season (Blu-ray)