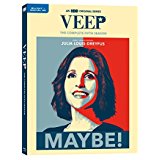 “As it turns out, there’s a virtually unprecedented tie in the Electoral College.”

If you thought the latest U.S. presidential election cycle was a soul-crushing and unpredictable mess, you should take a peek at what’s happening on Veep. (At least we got a definitive real-life result…eventually.) The show’s outstanding fifth season begins with President Selina Meyer — who assumed the office after her predecessor resigned — locked in a frustrating Electoral College tie as she seeks to become the first woman to be *elected* to the highest office in the land. President Meyer sums up her predicament in a manner befitting HBO’s caustic, constantly-cussing comedy: “didn’t those Founding F—ers ever hear of an odd number?!”

Veep absolutely deserves kudos for finding a way to manufacture angst (and comedy gold) for Selina Meyer (Julia Louis-Dreyfus) and her miserable band of incompetent staffers, even after she’s presumably achieved her dream of becoming president. Following the Electoral College tie, a vote in Congress is set to decide the next president. As a result, Meyer’s team — which includes clingy personal aide/“bag man” Gary Walsh (Tony Hale), overmatched White House Press Secretary Mike McLintock (Matt Walsh), brilliantly beleaguered Chief of Staff Ben Cafferty (Kevin Dunn), hilariously humorless strategist Kent Davison (Gary Cole) and hyper-efficient (and ageless?) personal assistant Sue Wilson (Sufe Bradshaw) — sets about wooing various members of Congress and scouring the country (or at least Nevada) for every last vote. (It’s probably not a great sign that no one can agree on how “Nevada” is pronounced.)

Not surprisingly, Selina’s quest has its ups and downs. Former staffers like Anna Chlumsky’s shrill high-strung Amy Brookheimer and Reid Scott’s smug Dan Egan are brought back into the fold. However, the most desperate move probably involves having Timothy Simons douche-y and deplorable Jonah Ryan run for Congress to help secure a crucial vote. (With the help of Sam Richardson’s impossibly optimistic — and impossibly incompetent — Richard Splett, of course.) Of course, Selina has a country to run while this is all happening. When she’s not dealing with a plummeting stock market or a possible (and possibly manufactured) Chinese hack, Selina tries to build a relationship with charming bigwig banker Charlie Baird (John Slattery). However, her biggest threat is probably Tom James (Hugh Laurie), her slimy running mate who has absolutely zero intention of being anyone’s vice president…because who in their right mind would want that job?!

Season 5 of Veep is the first one without creator Armando Iannucci, who previously spearheaded the equally-profane, British government-skewering series The Thick of It. (He also directed that show’s feature film spin-off In the Loop.) David Mandel, whose comedy credits include Seinfeld and Curb Your Enthusiasm, stepped in as showrunner. And as much of a creative powerhouse as Iannucci clearly is, I have to say the show didn’t miss a beat without him. (Veep also brought in an almost entirely new team of writers for the fifth season.)

“Do not use any of the vulgar parts.”

It’s tempting to draw real-life parallels between Meyer’s mock presidency and what’s happening in real-life: in Ep. 3/“The Eagle,” Selina lands in hot water after personally sending a message from her Twitter account for the first time. But rather than take shots at a particular party or political leaning, Veep hits the mark by taking aim at the shameless, ruthless and clueless arrogance on display in all of Washington D.C. (A symposium on race is comprised entirely of white people.) Ep. 4/“Mother” features Selina’s most nakedly emotional moment as she suffers a devastating personal loss…and on top of that, her mother dies! But lest you think the show would ever abandon its profane roots, Ep. 6/“C***gate” revolves around the mystery of who called Selina the c-word. (The joke, of course, is…who hasn’t?)

However, the season’s shining (half)hour is Ep. 9/“Kissing Your Sister,” which shows us all the behind-the-scenes footage Selina’s daughter Catherine (Sarah Sutherland) has been filming all season and offers a bit of a different look at this crazy cast of characters. The fact that Veep has been able to incorporate new players into its already swollen cast while actually getting funnier is the show’s most impressive feat. In addition to Slattery’s smooth banker, season 5 introduced Clea DuVall as a deadpan Secret Service agent/body double for Selina, Emmy nominee Martin Mull as a legendary and loopy White House player, and Peter MacNicol as Jonah’s volatile uncle. (MacNicol was also nominated for a Guest Actor Emmy…until he wasn’t.)

All of these new players blend seamlessly with the established cast, which continues to be expertly led by Louis-Dreyfus’ top-notch comedy chops. Selina is back in a familiar position during season 5: on the ropes and scrambling for her political life, which results in plenty of indignities and even more laughs. (Not to mention a giant stress pimple.) Other standouts include Walsh’s harried work as Mike (he’s so bad at his job, even the other incompetent people on this show notice how terrible Mike is), Simons’ embracing Jonah’s worst instincts during his congressional run, and Hale’s reliably devoted work as Gary (who experiences all the emotions Selina can’t).

Louis-Dreyfus won her fifth consecutive Emmy for her work on the show, and Veep picked up its second straight prize for Outstanding Comedy Series. But considering that everyone is absolutely sensational here, “I wish everybody won.”

Veep: The Complete Fifth Season is presented in its original aspect ratio of 1.78:1. The 1080p image is arrived at with an AVC MPEG-4 codec at an average of 29 mbps. Veep maintains a loose, cinema verite filming style that’s a great match for a show with so much improv. Even though it shifted production to Los Angeles for its fifth season, the comedy remains one of the least glamorous shows you’ll find on HBO. (The brightest, shiniest part of the visual presentation is always the brief, glittering opening credits.) While it doesn’t make for the most dazzling HD presentation, the show still finds moments to impress. Ep. 9/“Kissing Your Sister” features a lot of Catherine’s documentary footage, so I was pleased to see some subtle filmic grain added to the presentation. Otherwise, the image is generally blemish-free. Pulling off an image that is both sharp and drab is a tricky feat, but this Blu-ray — just like the four before it — serves the material extremely well.

The DTS-HD Master Audio 5.1 track exists to serve the salty, oft-overlapping dialogue full of wonderful profanity and wordplay. The track remains exceptional on this front, offering terrific clarity and separation. (The latter is crucial since there is often a roomful of people yammering.) Each and every nasty quip is accounted for here, which is great because there simply isn’t much more to this sonic presentation. (Even a helicopter taking off in the season finale/“Inauguration” doesn’t make much of an impact in the sound field.) Sub activity is virtually non-existent and the (lack of) use of the rear speakers continues to be a missed opportunity considering Selina and her staff are frequently roaming busy hallways or attending public outdoor functions that offer opportunities for supporting background noise. Of course, this isn’t supposed to be some sort of sonic extravaganza. As with the show itself, dialogue is king here.

Not surprisingly, most of the time is spent goofing on one another — Simons is jokingly made a “co-executive producer” after Louis-Dreyfus introduces herself that way — but Mandel (in particular) provides some solid production detail. (The show shifted filming from Maryland to Los Angeles for season 5.) The most fun track is the one for Ep. 9/“Kissing Your Sister” since everyone involved clearly had a blast making the mockumentary and deviating from the usual formula.

Deleted Scenes: (34:00) The funniest bits here are the improvised alternate takes for everything from The Eagle’s unique qualifications to speculation on how one of the members of Selina’s team got on a “Hot List” of D.C. staffers. The great ninth episode has by far the most excised material, which isn’t surprising given the documentary format. (Not surprisingly, Catherine’s doc has a ton of material that didn’t make the final cut.) Available on Discs 1 and 2.

Veep: The Complete Fifth Season features all 10 episodes on two discs. The show’s sixth season recently premiered following a finale that (naturally) left Selina’s future up in the air.

I’m excited to see what happens next. This fifth season could’ve been a turning point in the wrong direction for a show that lost its chief creative force and uprooted its production. Instead (unlike the characters it portrays), Veep is thriving in the face of a major challenge…and is probably the best comedy on television.