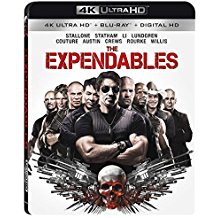 Remember the old days of the action movie? Those films where someone like Stallone or Schwarzenegger would run around and take out armies of bad guys while barely breaking a sweat. You know the kind of movie I’m talking about. The ones where the hero goes up against a hail of bullets and explosions and manages to pick off the bad guys without catching a single slug himself. These were the days when a guy like Bruce Willis could fall thirty floors, get a spike impaled in his ribcage, have a ton of concrete wall fall on his head, and get run over by a truck, but still manage to take out the bad guy while muttering some witty little catchphrase that we would all be repeating, because if we could deliver the line just right that meant we were tough guys too, and we didn’t even have to fall out of an airplane to prove it. Well, you won’t have to remember. You just have to watch Sly Stallone’s love letter to the action movie fans. It’s called The Expendables, and it’s out right now on UHD Blu-ray in 4K from Lionsgate.

Barney Ross (Stallone) leads a rough-looking group of mercenaries. They don’t fight for causes. They fight for cash. If the money’s right, the cause is right. These guys are getting a little long in the tooth, but they haven’t slowed down enough to get themselves killed…yet. They are approached by a mysterious man who calls himself Mr. Church (Willis) merely because they are meeting in a church. He hires them to take out a rogue general named Garza (Zayas) who has taken over the Gulf island of Vilena. The job pays five million dollars. Barney and Christmas (Statham) make a recon tour of the island in their seaplane. The group’s cover is that they are an animal-rescue conservancy group. There they meet the general’s daughter Sandra (Itie). She helps them get close to the stronghold, where they discover that Garza isn’t really the guy calling the shots. It’s an ex-CIA guy named James Munroe (Roberts). They piece the puzzle together and realize the man who hired him is also CIA, and they do not want to get involved in a CIA lover’s quarrel. They decide to turn down the job. But it won’t be that easy. The girl places herself in danger when she refuses to leave with the team even though the bad guys know she helped them out. It works on Barney’s conscience. He’s thinking about going back. When an attempted hit is made on the team led by a disgruntled former team member named Gunner (Lundgren), there isn’t anything more to think about. The mission is back on.

Now the target is Munroe and anyone who stands with him. That includes an army of about 200 soldiers and a one-man killing machine named, appropriately enough, Paine (Austin). With team members Ying Yang (Li), Toll Road (Couture) and Hale Caesar (Crews) on board with Barney and Christmas, they take on the bad guys. The end result is the expected explosive action that these movies are most known for.

There’s no question that this movie takes it back to the old-school way of doing things. That isn’t to say that the film doesn’t take advantage of the latest technology in filmmaking. Like the last Rambo film, there is a large amount of cartoon-style blood here. Blasts quickly tear away limbs, torsos, and faces. The blood is exaggerated much like something out of 300. But the meat of the old-school action films remains intact. These guys are doing a ton of physical stunts that landed more than one of the actors in a hospital bed for a day or so. There aren’t a lot of stuntmen filling in here. Stallone hired these guys for their ability and willingness to do just about anything for the film. I would have loved to have made an investment in ice production in New Orleans during the production of the film. It hurts. It’s dangerous. But if you want the gritty action that this kind of film provides, there just isn’t any other way to do it other than to just do it. Bodies have to get slammed around. Their pain is our gain when you find yourself watching one of the most adrenaline-packed films of the decade.

Stallone personally invited some of the best action heroes to come together for this film. Any one of these guys can, and has, headlined his own action film. It’s the most impressive collection of talent you’re likely to ever find in one film. They all have a great deal of admiration for Sly, and it shows in their passion and effort here. There’s plenty of fighting and shooting with the likes of Jet Li, Jason Stratham, Stone Cold Steve Austin, Randy Couture, Terry Crews and Dolph Lundgren. Mickey Rourke is along but doesn’t get mixed up in the action. He does have a couple of emotional scenes as a buddy to the team. There’s a wonderful cameo by both Bruce Willis and Arnold Schwarzenegger that will bring a huge smile to your face. I suspect we might see the governator in the sequel which is already being discussed. In the cameo he explains that he’s busy right now, but the curtain’s about to fall on that gig, and I suspect Arnie will be in front of the cameras soon after his January reprieve from politics. Expect a bigger part from Willis as well. Angel and Buffy star Charisma Carpenter has a small role as Christmas’s girlfriend. But these sorts of things are very brief breaks from the high-tension action that dominates nearly every minute of the film’s running time. You can’t help but like this one.

The Expendables is presented in its original aspect ratio of 2.35:1. The Ultra-high-definition  image is arrived at by an HEVC codec with an average bitrate of 70-80 mbps. The rate jumps as high as 116 mbps. This is an often dark and very gritty film. There isn’t a lot of color unless you’re talking about the red of all the blood that’s spilled on this feature. I’m not a big fan of CG blood or fire, and in ultra high definition it looks even less realistic. Fortunately, the film uses old-school practical effects, and they really work in ultra high definition, because they work with the extra clarity to add texture to the film, making it all a more visceral experience. There’s a lot going on here including a ton of mayhem. You’re going to get to enjoy every bit of it with this image presentation. Black levels are now near perfect. Now you get a lot more detail in the shadows where most of this film operates. Contrast is dead-on perfect. There’s a scene early in the film where the team have their laser sights on some bad guys. That laser pin light is absolutely perfect against the black background. This is what contrast delivers when it’s picture-perfect.

The Dolby Atmos presentation defaults to a nice 7.1 track, and it really delivers the goods. Your sub will shake, rattle, and roll your home theatre. You’re going to feel those explosions in your bones if you let it. Dialog does get lost at times, but let’s keep in mind we have a film filled with actors that aren’t really known for their perfect diction. You hear enough. The score is often exhilarating, and it’s all handled with extra-special care with this audio presentation. Surrounds are quite aggressive as you would expect with this much shooting and explosion. Sit back and let this audio track suck you right into the action. If that doesn’t get your heart pumpin’, you’re dead.

The extras are all on the Blu-ray copy of the film. It’s the same as the earlier Blu-ray release.

Stallone never wanted to do anything more than entertain. These guys made the kind of movie they would like to see. I suspect more of you than are willing to admit it fit into that category. Now is your second chance to get an adrenaline fix courtesy of the best action crew you’ve ever seen. What’s amusing is that I got to spend an evening watching The Expendables and call it a job. “Now you know what I do for a living.”

Gino Sassani is a member of the Southeastern Film Critic's Association (SEFCA). He is a film and television critic based in Tampa, Florida. He's also the Senior Editor here at Upcomingdiscs. Gino started reviewing films in the early 1990's as a segment of his local television show Focus. He's an award-winning recording artist for Omega Records. Gino is currently working on his 8th album Merchants & Mercenaries. Gino took over Upcomingdiscs Dec 1, 2008. He works out of a home theater he calls The Reel World. Favorite films: The Godfather, The Godfather Part II, The Body Snatcher (Val Lewton film with Karloff and Lugosi, not the pod people film), Unforgiven, Gladiator, The Lion King, Jaws, Son Of Frankenstein, The Good, The Bad And The Ugly, and Monsters, Inc.
A Dog’s Purpose (Blu-ray) The Affair: Season Three