Posted in: Disc Reviews by Gino Sassani on September 7th, 2017 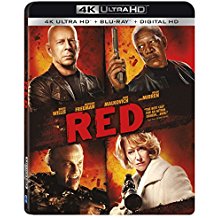 “This used to be a gentleman’s game.”

I must confess that I had not even heard of the comic book titles created by Warren Ellis and Cully Hamner. I think that might have been one of the best things that could have happened to me as I sat down to watch the film Red. With a cast this strong, there was little doubt that they would provide a powerful stamp on these characters. No insult intended toward the graphic novels, but I can’t imagine these characters any other way now.

Frank Moses (Willis) is a retired CIA operative. He’s trying to adapt to his mundane life. He’s lonely and pretends to lose his social security checks so that he’ll have a reason to call their office and talk to Sarah (Parker). The two spend more time flirting than actually dealing with lost retirement benefits. Life is a complete bore… that is until one night when a CIA hit squad breaks into his house and tries to kill him. He leaves behind a mess and must now get to Sarah before the killers get there. He’s sure they’ve been listening to the conversations and will know he likes her. The trouble is she doesn’t even know what he used to do for a living. He has to take her prisoner to get her out of her apartment in time. Then he goes on a Blues Brothers mission. Yeah, it’s time to put together the old band to figure out what’s going on. The old team includes Joe Matheson (Freeman) who has been a bit of a dirty old man in his retirement community. Marvin Boggs (Malkovich) is totally insane. He’s been living at a Florida swamp, but the house is just a decoy. He lives underground, accessible through a secret passageway from the trunk of a rusted-out car. Still, just because you’re paranoid that doesn’t mean they’re not out to get you. In this case they are. “They” happens to be Agent William Cooper (Urban). He’s been ordered to take out the team even if he doesn’t know why. The team finds help in Victoria (Mirren) and their old Soviet nemesis Ivan Simanov (Cox). They all need to stay alive just long enough to uncover the plot that goes to the highest levels of the government. These guys are classified R.E.D.: Retired Extremely Dangerous.

“You can’t just go around duct-taping everyone.”

Remember the old spy movies? It was Sean Connery as James Bond. The movies featured exotic international locations, and the spy was a cultured sophisticated playboy gentleman. He was dressed to kill in a tuxedo and black tie. Today the spy movie has become more of an action film. The spies wear jeans and tend to get caught up in huge firefights and explosions. There’s plenty of stunt work and very little sophistication. Spy movies have been thrilling, suspenseful, and even breathtaking. But when was the last time a spy movie was fun? I’m not talking Spies Like Us cornball fun. I’m talking amusement park ride that was both thrilling and funny. Red is that kind of a spy movie. It’s more shaken, less stirred. And it all has to do with a wonderfully energetic script and one of the best casts ever assembled for this kind of a movie.

“Don’t worry. With a small dedicated group there is nothing which cannot be done.”

Bruce Willis really doesn’t have to do more than play himself here. He’s actually the straight man in the whole bunch. He plays it nearly deadpan the entire ride. John Malkovich, once again, pulls out one of the most bizarre performances and characters. He’s the goofy guy who sees things that aren’t there. He’s the paranoid crazy guy who sees bad guys under his bed. He’s the simpleton mind that can’t grasp anything but a worst-case scenario. And … he’s right. He reminds me of the Dustin Hoffman character from Wag The Dog, but in reverse. He’s the insane voice in the background that’s ultimately making the most sense. Morgan Freeman is terribly underutilized in this film. For whatever reason, he bails for a good portion of the movie. You’re expected to believe he’s dead, but it’s obvious the filmmakers don’t intend for his return to be a surprise. It’s given away on the box art of the release and in the movie’s trailer. So I’m not revealing any serious spoilers here. The only problem is that the movie’s so much more fun when he’s there. These three characters have tremendous chemistry. You will never be able to get enough of these guys. I bought the whole idea that they’ve known each other forever. It’s not just the friendly and hilarious banter. There is a lot of subtext here that these guys make look easy. Helen Mirren shines as the old dame of the film. Richard Dreyfuss has a wonderful but short cameo in the film. One of the best cameos is the still-lovable Ernest Borgnine as the Record Keeper. The truth is the entire film is so riddled with these wonderful performances that it’s hard to keep up with the story, because these characters are stealing all of our attention. Karl Urban is top-notch here as the agent chasing the team through most of the movie. He’s the new Bones McCoy, and I still think he was the best performer in the new Star Trek film.

The movie certainly moves along. This is going to be one of the quickest 100 minutes of your life. There’s plenty of action and stunts to keep you entertained along the way. It’s a huge ride the entire time, and that’s the way you have to look at it.

Red is presented in its original aspect ratio of 2.35:1. The ultra-high-definition 2160p  image is arrived at by an HEVC codec with an average bitrate in the 80’s. This ultra-high-definition image presentation is rock-solid. Reds are appropriately a bit oversaturated, but not so much that they glow. Other colors also stand out. Blues and yellows really pop from the costumes and scenery. There is plenty of detail in this extremely sharp presentation. This is a very vivid and detailed image presentation. The character close-ups deliver wonderful flesh tones and facial details. There’s plenty of rich texture throughout the film. Black levels are superb. You couldn’t ask for a more natural and brilliant image than you’ll get with this one.

The Dolby Atmos presentation defaults to a 7.1 track. There’s plenty of action here where the surrounds plant you squarely in the action. The witty dialog comes through perfectly. The score delivers just the right mix of mood and atmosphere but knows how to get out of the way in a hurry. Solid sub response is going to make those explosions land shrapnel right in your home theatre. It’s an immersive experience without being a complete assault on your senses.

The extras are all on both discs.

Deleted And Extended Scenes: (8:46) SD There are 10 scenes with an optional play-all feature.

One of the best things I can say about a film is that I had a great time watching it. That really describes Red more than anything else said here. I can guarantee you a couple of hours of fun. The gags are fresh and original, and the cast is really something of a hoot to watch. They had a lot of fun making the movie, and it shows. I have to believe that these guys would absolutely be up for more even after though it’s been a while since the sequel. Whenever they get together again, you can count me in. Of course, there are some pesky death scenes to deal with. “Go figure.”

Gino Sassani is a member of the Southeastern Film Critic's Association (SEFCA). He is a film and television critic based in Tampa, Florida. He's also the Senior Editor here at Upcomingdiscs. Gino started reviewing films in the early 1990's as a segment of his local television show Focus. He's an award-winning recording artist for Omega Records. Gino is currently working on his 8th album Merchants & Mercenaries. Gino took over Upcomingdiscs Dec 1, 2008. He works out of a home theater he calls The Reel World. Favorite films: The Godfather, The Godfather Part II, The Body Snatcher (Val Lewton film with Karloff and Lugosi, not the pod people film), Unforgiven, Gladiator, The Lion King, Jaws, Son Of Frankenstein, The Good, The Bad And The Ugly, and Monsters, Inc.
Red 2 (UHD Blu-ray) (4K) Star Wars Rebels: Complete Season Three (Blu-ray)