Posted in: Disc Reviews by Jeremy Butler on September 6th, 2017 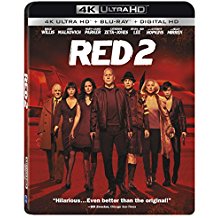 “It’s important to enjoy life while you still can.”

My word, Bruce Willis must be exhausted, helming three movies this year so far and six last year alone; jeez, I know I’d be in need of a serious break. Luckily in RED 2, Willis doesn’t have to hold down the fort alone. Not when you have Malkovich, Mirren, and Parker available to help pick up the slack. That’s right, like Joe Matheson (Morgan Freeman’s character from RED) said in the original, “The band is getting back together.”  And this time they are picking up some new members as Catherine Zeta-Jones and Anthony Hopkins join the cast. RED was great, but RED 2 is epic.

After the events of RED, Frank Moses (Bruce Willis) has settled back into a normal life with girlfriend Sarah (Mary Louise Parker). Frank looks forward to putting down roots with Sarah, but Sarah, after their last adventure, is not keen on the idea of regular life. Her prayers are answered with the reappearance of Marvin (John Malkovich), Frank’s wacked-out former partner. Marvin informs the pair that classified documents have surfaced on the internet highlighting his and Frank’s involvement in a covert operation, codenamed Operation Nightshade.

Nightshade was a mission to smuggle a nuclear device into the Soviet Union. With the news of Frank’s and Marvin’s connection to the operation, Victoria (Helen Mirren) informs the group that the two have landed on Interpol’s most wanted list and that she has just been green-lit by MI-6 to eliminate them. Now being hunted by every intelligence organization with initials (and a couple without), the group must rely on the help of some old friends and a new one (Catherine Zeta Jones) to find the weapon, all while being pursued by a ruthless black ops agent (Neal McDonough) and a bloodthirsty assassin (Lee Byung-hun) with a grudge to settle with Frank.

I honestly never thought I would be able to say this, but RED 2 definitely surpassed the original. It’s fun, really fun, with exceptional comedic timing and lots of action. In the original, the story was confined to domestic soil, but now it unfolds on a much wider scale, traveling to Paris, London, and Moscow. Most importantly, the film stays true to where it came from. The trouble with most sequels is rooted in the attempt to outdo the previous film; they go too big and forget the qualities that made the first film great. Thankfully that is not the case here, as the story feels just like a continuation of the first film. The two could have been released one right after the other with no problems.

The cast as a whole is fantastic; Parker gets the opportunity to play a more significant role, and the established banter and dynamic that existed remains intact. With the cast loaded with heavyweight talent, it becomes difficult and yet necessary for one to establish himself from the pack. However, one member of the cast manages to do it and make it look easy, and no, it’s not Bruce Willis this time. Malkovich is the leader of the pack in the sequel; his comedic portrayal of beloved character Marvin outshines the others, and several instances of it are accomplished without him saying a word. I love the expressive way that Malkovich plays Marvin; just a certain look at the right time was enough to induce laughing fits.

Red 2 is presented in its original aspect ratio of 2.40:1. The ultra-high-definition 2160p  image is arrived at by an HEVC codec with an average bitrate well into the 80’s. This ultra-high-definition image presentation is pretty much treated exactly like the first film. Reds are appropriately a bit oversaturated, but not so much that they glow. Other colors also stand out. Blues and yellows really pop from the costumes and scenery. There is plenty of detail in this extremely sharp presentation. This is a very vivid and detailed image presentation. The character close-ups deliver wonderful flesh tones and facial details. There’s plenty of rich texture throughout the film. Black levels are superb.

The Dolby Atmos presentation defaults to a perky 7.1 track. Again the surrounds are quite immersive. It’s not just the gunfire and explosive material. The mix does an outstanding job of revealing spaces. The subterranean area beneath the Kremlin is a good example of accurate sound that only adds to the realism of the experience. Dialog always punches through, and the score drives the action throughout.

The extras are on both discs:

The Red 2 Experience: (34:41) This is a four-part feature with a handy play-all option. The parts focus on cast, weapons, spy gear, and stunts.

Deleted Scenes: (4:28) There are five with no individual selection option.

Armed with .45 caliber jokes and precision action sequences, RED 2 is fun in the best sense of the word. Never a dull moment, it is a fantastic summer blockbuster and the ideal launching pad for a third installment, which we all know is coming.

Jeremy Butler is a film school graduate of the International Academy of Design and Technology. He is been writing for Upcomingdiscs since 2012; however, movies have played a big part of his life for much longer. Favorite genres include horror, science fiction/fantasy, and comedy. Favorite movies are V for Vendetta, Boondocks Saints, Kiss Kiss Bang Bang, and The Godfather.
The Cabin in the Woods (UHD Blu-ray) (4K) Red (UHD Blu-ray) (4K)