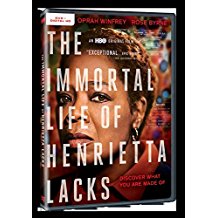 “What can you tell me about African Americans and science?”

Anyone who even halfway paid attention in their high school science class knows that a polio vaccine was developed in the 1950s. And if you were especially attentive, you even know the vaccine was developed by American researcher Jonas Salk. Unfortunately, the story that is far less commonly told in classrooms is that of Henrietta Lacks, the poor black woman whose “immortalized” HeLa cell line gave birth to the biomedical industry. The Immortal Life of Henrietta Lacks takes a curious approach: instead of merely shining a light on its worthy subject, this powerful (and overstuffed) HBO film is about *the quest* to bring Henrietta back to life.

“For decades, scientists had been collecting tissue samples from patients without consent, searching for cells that could live outside the human body. In 1951, a woman entered a hospital in Baltimore, Maryland and everything changed.”

The woman’s name was Henrietta Lacks (Renee Elise Goldsberry), and she was suffering from cervical cancer in the early 1950s. After a conducting a biopsy of Henrietta’s tissue sample, scientists at Johns Hopkins Hospital in Baltimore discovered something they’d been seeking for decades: an “immortalized” cell line that could be reproduced indefinitely in a lab and allow for experiments that couldn’t be performed on living subjects. (Salk, for example, used Lacks’ cell line to develop his polio vaccine.) Naturally, there was one major catch: Henrietta never gave consent to have her tissue sample tested. As a result, the name of the cell line — which was subsequently sold and used for medical and commercial purposes — was shortened to “HeLa.” More alarmingly, it took decades for the Lacks family to even become aware of Henrietta’s groundbreaking contribution.

Enter Rebecca Skoot (Rose Byrne), a freelance science and medical writer seeking to tell Henrietta’s personal story. Her main point of contact is Deborah Lacks (Oprah Winfrey), one of Henrietta’s daughters. Deborah — who was a toddler when Henrietta died — is desperate to know more about her own mother, so she agrees to help Rebecca with her book. It’s no easy task since the Lacks family harbors great resentment toward a system that profited greatly — both medically and monetarily — from Henrietta’s cells. Meanwhile, the Lacks family never saw a cent, and several of them (including Deborah) still carry emotional and psychological scars related to Henrietta’s death.

“Better get yourself ready ’cause this story’s crazy enough for three books!”

The Immortal Life of Henrietta Lacks is based on Skloot’s 2010 best-seller of the same name. The movie version of Skloot is hesitant to leave out the unseemly personal tragedies of the Lacks family, which lands her in hot water with would-be publishers. Not surprisingly, the film itself seems resolved to cram as much material as possible into its slim 93-minute running time.

That includes a flirtation with white savior territory. But while Byrne does some solid, stressed-out work, the story doesn’t end up being about Skloot. She’s mostly a vehicle that allows the film to make a convincing case for painting a full picture vs promoting a homogenized version of real-life events.

At its most impactful and heartfelt, The Immortal Life of Henrietta Lacks is about a daughter trying to find out who her mother was as a person. While Deborah’s case is extreme since she had virtually no memory of her mother, the idea of a child knowing their parent as a fully-formed adult (as opposed to just as “mom” or “dad”) is interesting. Winfrey is, simply put, a powerhouse. Yes, there’s some scenery-chewing involved, but I was thoroughly impressed by how effectively one of the most famous and recognizable people on the planet was able to completely disappear into this passionate mess of a character. (And I’m generally impressed by how good Winfrey is at acting, considering it’s not her main focus.)

You may or may not have noticed one important missing component: we actually don’t get to know much about Henrietta Lacks. Sadly this means Goldsberry (a recent Tony winner for her blistering work in “Hamilton”) doesn’t have much to do at all. Other cast members — Reg. E. Cathey as Deborah’s even more manic younger brother Zakariyya, John Douglas Thompson as weary and protective older brother Lawrence, and Courtney B. Vance in a cameo as spectacularly slimy “lawyer” Sir Lord Keenan Kester Cofield — deliver very strong work, but each feel underused.

Despite some emotional and illuminating moments, the fact that the movie is mainly about Deborah’s quest to know her mother and we don’t end up learning all that much about Henrietta — other than the fact that she was exceedingly kind and a chronic caretaker to everyone around her — seems like a notable oversight

The Immortal Life of Henrietta Lacks is presented in its original aspect ratio of 1.78:1. The 1080p image is arrived at with an AVC MPEG-4 codec at an average of 29 mbps. The film opens with a black and white prologue that nicely mimics the look of a newsreel as we get some background on the HeLa cell line. There are also occasional flashbacks to the immortal life of Henrietta Lacks, which are presented in a desaturated, crema-like filter. The movie’s baseline image, however, is clean and represents a solid HD presentation. A decent amount of shabby detail can be found during the scenes in Baltimore and whenever Deborah and Rebecca’s investigation takes them to rural Virginia. (The latter sequences offer some pleasing warmth.)

The DTS-HD Master Audio 5.1 track is dialogue-driven, to be sure, but offers periodic bursts of excitement and vitality. The most obvious examples come courtesy of Branford Marsalis’ jazzy, manic, percussion-driven score, which fills the entire sound field and gives the subs more to do than you’d expect from a drama about a woman diving into her family’s history. The sad, broken muffler on Rebecca’s sad, broken car is a low-key source of comedy and another chance for the subs to show their stuff. Beyond that, surround activity is very understated…we get some street noises during brief outdoor scenes in Baltimore. Other than that, the dialogue lives in the front speakers in this solid, well-balanced track.

Family Featurette: (2:31) Despite being incredibly short, this featurette includes input from an impressive number of relatives of the real-life Henrietta Lacks. They speak glowingly about Henrietta’s legacy and Deborah’s determination.

Filming in Georgia: (3:16) Cast and crew place a heavy emphasis on the generous tax incentives offered by Georgia. Kind of an odd addition to this set, though not exactly surprising given the number of projects filming there.

“We see no reason why an interesting story could not be written without using her name. And, so…rather than run the risk of getting in trouble for disclosing it, the cell strain should be referred to as HeLa…and the patient’s name not be used.”

The covert art for this film features the words “The Immortal Life of Henrietta Lacks” in big, blocky, bold letters. However, the cover image is also a close-up of star/producer Oprah Winfrey. Obviously, I get why you’d want Oprah front and center to sell your movie, but it’s not hard to imagine someone assuming that Oprah was the one playing Henrietta Lacks.

That sort of mixed messaging is precisely the thing that ends up hampering this biopic from achieving true greatness. Fortunately, it’s not nearly enough to keep me from recommending this powerful account of an intensely personal story that needed to be told.