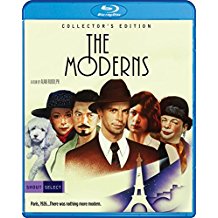 “Seems like a new boatload of expatriates gets dumped here every day.”

In The Moderns, “here” happens to be 1926 Paris, a time and place that immediately conjures joie de vivre images of lavish parties and complete artistic freedom. And while both of those things are technically on display in filmmaker Alan Rudolph’s 1988 drama, the movie turns down the volume on the Roaring Twenties to explore the tricky and transactional connection between art and commerce…and how it can extend to personal relationships.

The Moderns quickly and deftly introduces us to the core crew of artists who spend their days bouncing ideas off each other and seeking inspiration in smoky cafes. Nick Hart (Keith Carradine) — a cartoonist whose work appears in a gossip column written by chatty friend Oiseau (Wallace Shawn) — is one of the broker members of the Lost Generation, which refers to the group of post-World War I writers and artists who left the United States in favor of cities like Paris and London. The term “Lost Generation” was coined by Gertrude Stein, who is played here by Elsa Raven. Ernest Hemingway (Kevin J. O’Connor) can also be found brooding in the background and gathering material for “The Sun Also Rises.”

“It’s ok to be broke in Paris. In America, it’s downright immoral.”

Hemingway’s novel went on to become a literary classic, but Nick would happily settle for being able to put food on the table. Nick’s true passion is painting, but no one wants to buy his work, despite the best efforts of gallery owner Libby Valentin (Genevieve Bujold). As a result, Nick becomes entangled in a plot to forge three famous paintings for wealthy art patron Nathalie de Ville (Geraldine Chaplin). Meanwhile, Nick becomes enchanted with Rachel (Linda Fiorentino), a disillusioned American woman married to the rich and dangerous Bertram Stone (John Lone).

“There is no value, except what I choose to put on it.”

The triangle between Nick, Rachel, and Stone is the main dramatic thrust of The Moderns. (Especially after we learn Nick and Rachel share a past together.) However, it’s also used to explore Rudolph and co-writer Jon Bradshaw’s ideas about art and commerce. To be honest, I was a little alarmed to find myself somewhat agreeing with the aptly-named Stone’s blunt-force thoughts on the subject.

I like to think I’m reasonably in touch with my artistic side, but there are absolutely priceless paintings and other works of art whose appeal sail right over my head. On top of that, I’ve always marveled at the luck of the draw among songs that become smash hits or fade into obscurity. The Moderns points out that even the most experienced experts can’t always tell the difference between a masterpiece and something mundane…or between a forgery and the real thing. So Stone’s thesis that the “valuable” work of art is the one that fetches an exorbitant amount of money and critical acclaim sounds pretty reasonable to me.

“Don’t confuse sex and love…it’ll spoil both for you.”

Of course, what makes Stone truly deplorable is his belief that “paying” for his wife’s current lifestyle gives him ownership over her. Considering the fact that he’s almost out of wall space in his spacious home, it’s no wonder Rachel is his prized possession. (With the emphasis being firmly on “possession.”) Lone brings a dignified danger to the unhinged Stone, which contrasts nicely with Carradine’s effortless cool. Fiorentino is certainly a fetching object of affection for both men — well, for Nick at least, in terms of “affection” — and the actress manages to tap into Rachel’s inherent sadness, even though we don’t get very many scenes from her perspective.

The Moderns does drift and meander a bit, which leads to the slightly inflated 126-minute running time. Luckily, those margins are filled in by surrealist touches and colorful supporting players. Besides heavyweights like Hemingway and Stein (O’Connor and Raven nicely embody the iconic writers), Shawn is a reliable source of laughs as Oiseau, who is fixated on forward movement and his own mortality. Chaplin quietly has a blast as the immoral art patron, and Bujold is a fun (if underused) partner in crime for Nick.

The Moderns is presented in an aspect ratio of 1.85:1. The 1080p image is arrived at with an AVC MPEG-4 codec at an average of 37 mbps. According to the the text that accompanies this Shout! Factory release, the “feature has been newly remastered in 2K from the original film elements.” In the “Making of” included on this disc (see below), filmmaker Alan Rudolph says he wanted the look of The Moderns to feel as if “we’re inside a painting.” To that end, the movie is as rich with texture — filmic grain and even some very subtle instances of artifacting — as the canvas for one of Nick’s paintings. The film’s transitions between black and white and color are smooth, even if I found them more distracting than effective. The image is not something you’d describe as razor sharp, but the more muted colors and occasionally hazy picture — especially during the scenes inside the cigarette smoke-filled cafe Nick and his fellow expats frequent — serve the story well.

The DTS-HD Master Audio 5.1 track had the potential to be livelier than your average dialogue-driven drama. The crowded cafes and busy Parisian streets that occupy much of the film’s running time should’ve brought the entire surround sound field to life. Instead, the rear speakers are largely used to echo the dialogue. The most robust sequence is the spirited boxing match between Nick and Stone. The score by Mark Isham and Charlelie Couture’s can also be perpetually heard lingering in the rear speakers, since music underlines many of the movie’s scenes. Clarity is good, but I wish we’d gotten a little better separation and an overall more immersive sonic experience that truly transported us to 1920s Paris.

Art and Artifice in The Moderns: (1:36:35) This serves as a feature-length exploration of the themes in The Moderns, as well as a completely comprehensive look at every aspect of the movie’s creation, courtesy of new interviews with director/co-writer Alan Rudolph, producer Carolyn Pfeiffer, and star Keith Carradine. When I say “comprehensive, I mean Rudolph talks about working on the first draft of this story in 1970 and discusses the movies he made leading up to The Moderns and how they helped him secure funding for this film. An enthusiastic Carradine and very informative Pfeiffer round out this great “Making of.” Absolutely worth a watch.

Thanks to Shout! Factory, The Moderns makes a solid Blu-ray debut that faithfully reproduces the film’s original look and extensively covers the movie’s genesis.

The more I think about this film, the more I like it. The Moderns is buoyed by a stylish setting and a witty script — “Hart” vs. “Stone,” along with exchanges like – “How do you feel?” – “Like $100 bucks” — that examines a question many artists (painters, cartoonists, writers, songwriters, filmmakers) probably wrestle with every day of their lives: “what is the worth of my work?”

The Immortal Life of Henrietta Lacks (Blu-ray) Tuesday Round Up: September 12 and 19, 2017