Posted in: Disc Reviews by John Delia on December 6th, 2017 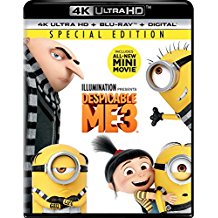 The Despicable Me series that includes Minions never seems to get tiring as they extend their comedy one more time with Despicable Me 3, opening this weekend. The key to the filmmaker’s success is the handling of the characters and inserting them into the animated movie with a plan in mind. That plan consists of starting with a little comedy involving the Minions, then working into some intense action that leads to a champion who either succeeds or fails. In the meantime there are multiple stories going on with each one targeting certain audience members.  Sounds complicated? Well, the best comedy adventure is intricate, and Illumination Studios does that very well.

The lovable characters are back again with a new twist on Gru’s (Steve Carell) employment.  It seems that the government has hired him as a partner for Lucy (Kristen Wiig) in the Secret Service following their marriage. Gru, now an agent looking for the bad guys instead of being one himself, seems to have found his goal in life.

Recovering the largest diamond in the world from super-thief Balthazar Bratt (Trey Parker), but not arresting him, however, wasn’t good enough for Valerie Da Vinci (Jenny Slate), the new agency director. So in a fit of rage she kicks Gru and Lucy to the curb, leaving them without jobs. On top of all that, the Minions have turned a cold shoulder, because Gru has now become a softie.

Lost and forlorn, Gru gets word that he has a twin brother name Dru (also Steve Carell) and goes to Mom (Julie Andrews) to find out why she never told him. He meets his twin and the two hit it off, especially because Dru wants to be a bad guy to continue the family tradition, something he was not allowed when he was a child. In the meantime, Lucy has been trying to be a mother to Margo (Miranda Cosgrove), Edith (Dana Gaier) and Agnes (Nev Scharrel), but striking out.  Unfortunately Margo, her biggest critic, has been very little help, but that’s all about to change.

This sets the scene for a lot of laughter from a number of ridiculous situations in the world of Despicable Gru.  Among them are a sneaky way to steal back the largest diamond, Agnes finds a new pet, Lucy becomes a mama bear, and there’s a little harmony in the jailhouse featuring “Kevin and the hundred minions”.

But it’s not all roses for Despicable Me 3. While it’s better than Despicable Me 2, it lacks the surprises of the first film.  So we have to take the bad with the good and accept the repetition as if it were the first time through, the action with a lot of nonsense, and the kiddie heartwarming scenes with less tears of joy. That said, if you like the series so far, then you won’t want to miss this chapter I have dubbed “family matters”.

Despicable Me 3 has been rated PG by the MPAA for action and rude humor. Most of the humor is tongue-in-cheek, and the most discourteous should go over the youngsters’ heads (or at least I hope so).

Despicable Me  is presented in its original aspect ratio of 2.40:1. The Ultra high-definition 2160p  image is arrived at by an HEVC codec with an average bitrate of a sweet 75 mbps. This ultra high definition image presentation is awash in wonderful colors. Computer animated films have great opportunity to take advantage of both the color expansion of HDR as well as the improved contrast. You get both here. The colors are vivid and bright. From wonderful slick primary colors to the abundance of purple in this one you get an eyeful of candy. The contrast really comes alive when both Dru and Gru are together in costume. The bright white and dark black suits display a nice sharp contrast that makes the film so visually stimulating. There’s plenty of texture and detail available thanks to the good animating job here. Water looks quite good. Black levels and depth are striking and as good as almost anything I’ve seen in 4K HDR to date, with the possible exception of LEGO Batman.

The DTS:X defaults to a delightful 7.1 track. This may not be as aggressive as I expected or you might hope. But there is plenty to like about this audio presentation. The minions provide some of the most distinct surrounds since there are so many of that chattering at once. The gadgets deliver some interesting sonic moments, as well. Dialog cuts through very well. Source music and score both deliver nice emotional beats that cut through the mayhem quite nicely. Subs don’t provide quite the power I was hoping for. This might be the one place the presentation falls considerably short.

The extras are all on the Blu-ray copy of the film with the exception of the Mini-movie which is presented on the UHD disc and in full 4K/HDR.

Deleted Scene With Intro By Dana Gair: (:40) The actress introduces us to an extended scene of the unicorn watch.

The Making Of Despicable Me 3: (6:50) This is the longest of these brief, mostly promotional features. The production crew talk about how the story was built upon for the second and now third film. There’s also a deleted scene included here.

Developing Dru: (4:13) Steve Carell joins the production team as they look at the creation of the brother character.

The AVL Files: An interactive system that provides you with briefings on various characters.

Despicable Me TV: Three shorts that are in the form of fake commercials for a Bratt action figure, Bad Bod workout video and Agnes’s Toy Sale.

If you are already hooked on the franchise or have never seen the wild and crazy characters, “Go, Go see it my darlings, and have a wonderful time”; something Gru’s mom would say with a Romanian accent.

John Delia has been on all sides of the movie business from publicity, writing for publications and on line blogs, script writing, to film making. Writer, critic, film editor he has worked as a film critic on this second go around for 14 years. He earned his Bachelor’s degree at the college of Journalism and Communications at the University of Florida in Gainesville, Florida. John is an active member of the Southeastern Film Critics Association (SEFCA) . Favorite Films: Lord of the Rings/Hobbit trilogies, The Godfather trilogy, the Indiana Jones trilogy (I didn't like the 4th), The Avengers and for TV it's Game of Thrones. As for animation it's a tie between anything Pixar and everything Hayao Miyazaki.
Holiday Gift Guide Spotlight: CBS Television Sets The Crucifixion (Blu-ray)