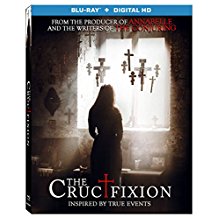 “Sounds like you don’t have a lot of faith in faith.”

You know how sports teams retire the jerseys of their most beloved, outstanding players so that no one can ever wear their number again? Well, we are well past the point where movies about exorcisms need to be hanging from Hollywood’s rafters. Simply put, no one has ever come close to doing it as well as William Friedkin did almost 45(!) years ago with his adaptation of The Exorcist. If anything, The Crucifixion is an even more egregious misfire than other head-spinning stabs at the genre because this movie is actually based on an intriguing, horific real-life case.

The Crucifixion is set in the mid-2000s in Romania, where Sister Adelina Marinescu (Ada Lupu) dies during an exorcism. The details of the nun’s death — she was crucified for three days before her body gave out — are grisly. Father Dumitru, the priest who conducted the exorcism, has been charged with murder, which draws the attention of skeptical journalist Nicole Rawlins (Sophie Cookson). Nicole has her own ax to grind with faith, so she briefly interviews Father Dumitru before heading to the Romanian countryside where the alleged exorcism took place to investigate. But despite Nicole’s lack of faith, she starts to experience strange and terrifying occurrences that ultimately put her life in danger.

The Crucifixion is touted as being “from the producer of Annabelle” (meh) “and the writers of The Conjuring.” (Now we’re talking.) The latter movie is actually an encouraging point of comparison for The Crucifixion since The Conjuring and its sequel were based on the real-life paranormal cases of Ed and Lorraine Warren. It’s important to note that, no matter how loosely the Conjuring movies were based on actual events, the Warrens were the engines that propelled the story.

“You can’t take the devil out of people with pills.”

On the other hand, The Crucifixion takes its own potentially fascinating real-life premise…and almost entirely chucks it out the window by placing the story in the hands of an invented, skeptical junior journalist with baggage. Early on — when Nicole interviews Father Dumitru in prison — the movie threatens to explore the interesting notion that mental illness is often interpreted as a supernatural or spiritual ailment in less developed parts of the world. Unfortunately, Father Dumitru all but vanishes from the story until just before the end credits, when we learn what happened to the real-life priest accused of murder.

Instead, director Xavier Gens quickly replaces Dumitru and any potentially provocative ideas with a never-ending parade of cheap, unearned jump scares as Nicole’s investigation intensifies. (The creepy mute gypsy boy who follows Nicole around is more effective than the shrieky ghost of Sister Adelina that consistently pops up.)

It doesn’t help that the comely Cookson makes for a lightweight and completely unconvincing journalist/protagonist. Casting an attractive young actress who is noticeably lighter than everyone around her feels like a shameless attempt to make the story more palatable for American audiences. (Even though Cookson is British.) In case you didn’t get the hint, Nicole also teams up with the handsome, helpful Father Anton (Corneliu Ulici) to investigate the exorcism. (You’re not going to believe this, but Nicole starts to covet Father Anton in decidedly unholy ways.)

A movie like The Exorcism of Emily Rose worked because it took the familiar tropes of the exorcism subgenre and cleverly re-cast them as courtroom drama. The Crucifixion fails because it tries to shoehorn a jump scare-y horror flick into a story where it’s an awkward fit.

The Crucifixion is presented in an aspect ratio of 2.40:1. The 1080p image is arrived at with an AVC MPEG-4 codec at an average of 27 mbps. The movie was filmed in Romania — where it is also set — and the intermittent sequences showcasing the nation’s countryside provide the only blips of light in this presentation. (Except for the film’s final shot, which pays off the idea that rays of sunshine are literally God’s handiwork.) These scenes provide an overcast palette paired with earthy, muted greens. Otherwise, this movie lives in the shadows, whether we are flashing back to Sister Marinescu’s exorcism or witnessing the strange occurrences haunting Nicole’s investigation. Black levels are generally deep and offer pretty good separation. Despite low-lighting conditions throughout, this is a clean and crisp presentation. (The sharpest fine detail can be seen during the climactic exorcism.)

The DTS-HD Master Audio 5.1 track is definitely on the aggressive end, which becomes irritating once it’s clear how much this movie relies on cheap jump scares. The subs and the rest of the surround sound field conspire to jolt you out of your skin anytime something even remotely spooky happens to Nicole. (It might also be to get your attention in case you start to nod off.) The final exorcism is the most impressive sonic sequence, showing fine separation between the screams up front and the heavy rain in the rear speakers.

The Crucifixion — The Director’s Vision: (6:45) Director Xavier Gens talks about taking on this project after connecting with the character of Nicole and the script as a whole. (Although he neglects to mention precisely *why* he connected with the material.) The filmmaker also talks about the importance of having a unified vision and taking chances on-set. Other than saying some complimentary things about filming in Romania (after not being impressed with the country years earlier), Gens’ input here is as generic as his movie it gets.

The Crucifixion would’ve been better served as a more thoughtful drama, but its producing/writing pedigree apparently demanded it be turned into the wannabe horror film we got.

In a year where more than a few horror/thrillers excelled at the box office, it’s easy to see why The Crucifixion went unattended.