Posted in: Disc Reviews by Dan Holland on January 3rd, 2018 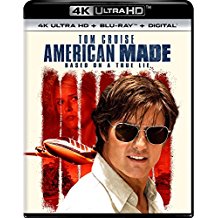 “Backslidin’, how do you do? These slippery people gonna see you through.”

It has been a long while since I have witnessed a pop song’s lyrics fit so poetically into a feature film. “Slippery People” is a track off the groundbreaking Talking Heads album, Speaking in Tongues, released in 1983. Not only does this song fit the plot of American Made within its lyrics (hints of backsliding with a lot of slippery people), but it also represents a specific aesthetic for one of the many years shown throughout the film. Which, by and large, is what American Made does very well: appreciates the nostalgia of the 70’s and 80’s without exaggerating to extremes. More often than not, the “nostalgia aesthetic” very quickly becomes a parody of itself. However, what director Doug Liman offers audiences is bold moves in film form, lightly garnished with relevant nostalgia.

Barry Seal (Tom Cruise) is a very successful young pilot in 1979. Graduating at the top of his class, he has secured a good career with an airline, but still depends on relatively illegal activities to make all of his ends meet. Schafer (Domhnall Gleeson), a young operative from the CIA seeking new intel on the insurgents of the Nicaraguan Revolution, exploits Seal’s talent for flying to accomplish his own mission. As Seal continues his new job successfully, he is forced into triple agency through associations with the Columbian cartel, the CIA and Contra coalition, and even the DEA. Through consistent shady dealings that yield a significant bankroll for Seal and his family, the amount of money and notoriety he receives adds more tension to his already dangerous lifestyle.

My appreciation for Doug Liman has waned over the years. I was never really impressed with Swingers (1996), but Go (1999) and The Bourne Identity (2002) were really influential to my admiration of the crime-thriller genre. After that, with films like Mr. & Mrs. Smith (2005) or even Edge of Tomorrow (2014), it felt as if Liman’s aesthetic had strayed a bit from complex narratives to relying more heavily on big action sequences to achieve entertainment. With that said, I find it very refreshing that the action sequences were subservient to the complexities of the narrative, allowing the audience to truly appreciate the comical, yet anxious nature of Gary Spinelli’s storytelling.

The best part about said storytelling is that it is carried very well by all the actors in the film. Rather than the action-thriller hero that Tom Cruise has played for the better part of two decades, the performance of Barry Seal offers the incredible nuances of an ambitious opportunist who hides behind the veil of innocence and sincerity. It really is incredible. Also, the supporting cast really understood the tone of the film, which created a fantastic atmosphere; specifically, Domhnall Gleeson and Sarah Wright. Gleeson’s happy-go-lucky charisma is really what sets the comedic tone of the film, and Wright’s portrayal of Seal’s wife allows the audience to identify with a character who is on the outside looking into the double-crossing. In addition to the characters being developed well, they are all equally fun to watch. My personal favorite minor role was Mauricio Mejía playing the role of Pablo Escobar. Although he didn’t get a lot of screen time, his character was given some of the best lines and mannerisms.

Now, of course, nothing can ever be perfect. While I really did enjoy myself throughout the film, there is a very confusing choice of cinematography very early in the film. During the setup of the plot, whether it be Seal’s piloting montage or some of the earlier conversations with his wife, the camera takes on an exaggerated handheld aesthetic and shoots from a lot of Dutch angles. This aesthetic continues on into the more intense sequences where it makes sense, but to start the film with it really didn’t make sense. It caused more harm than good, as it drew a lot of negative attention to itself, especially because they have more than enough static camera scenes throughout the entire film. It just felt out of place.

Also, the film’s tone has a fantastic tension of humor and anxiety, and they missed a perfect opportunity for a fade to white. Typically, when a film fades to black, it implies a sense of closure, whereas the opposite would imply a sense of ambiguity. Essentially the film does fade to white but immediately nullifies it by ending on those stereotypical “where are they now” sequences found in a lot of biopic films. The fade to white certainly would have been very jarring as it happens to be tragic and abrupt, but it would have fit into the film so well. It would have been a cathartic release of all the tension that was so wonderfully built. Instead, by inserting the aforementioned sequence, it undermines the tensions by giving it a concrete “happy” ending.

American Made is presented in its original aspect ratio of 1.85:1. The ultra-high-definition 2160p image is arrived at by an HEVC codec with an average bitrate of 75-80mbps. The numbers often float well beyond 100. This ultra-high-definition image presentation is nearly flawless. It’s not so much color but detail and realism that wins the day in this transfer. The high bit-rate offers some sharp images that are most striking when Cruise is in the air. Some of the aerial photography is quite stunning. There’s also a sense of depth in those shots that brings you into the sky with Cruise. Black levels are solid and deep.

The DTS:X presentation defaults to a lively 7.1 track. This is actually a dialog film that sports moments when the surrounds come alive and bring you along for the ride. Like the image presentation, the audio serves us best when we’re up in the sky flying with Tom Cruise. The subs offer fitting bottoms to the flight sounds and add a little extra punch to crashes and explosions. Dialog is always clear and well centered.

Deleted Scenes: (9:56) There are six with a play-all option.

American Storytellers: (6:39) mostly clips as cast and crew talk about developing the idea and the origin of the real story. We find out that Liman is a bit too close to that material. He says his father led the Iran-Contra investigation and called Oliver North an enemy of his father’s.

Cruise And Liman – A Conversation: (5:25) Star and director sit and chat. We learn that they lived together during the shoot and had an Odd Couple Felix and Oscar relationship.

In The Wings: (6:05) This feature focuses on the cast and characters.

Shooting American Made: (4:16) Not a very extensive behind-the-scenes feature. Lots of clips and a little production footage.

Flying High: (4:50) This was mostly about Cruise as a pilot doing most of the actual flying.

The Real Barry Seal: (5:51) The real man’s son gives us a little insight into the actual guy.

It’s a bit difficult to leave this one at a three-and-a-half-star rating. I want to bump it up to a four so bad, but with the strange choice in cinematography and the forced, seemingly “happy” ending I just can’t say the film was at its best. The film is a thrilling ride for sure, and it is so worth the watch, but it teased my specific taste in films (sad ambiguous endings) and immediately ripped it away from me. Regardless, it is really the most fun I’ve had watching a Tom Cruise film since Eyes Wide Shut (1999).