Posted in: Disc Reviews by Brent Lorentson on January 17th, 2018 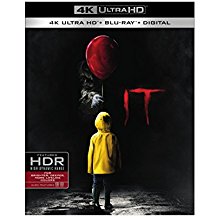 Mike (Chosen Jacobs) was always the last addition to The Losers Club, but in the film he is given more to do as he deals with some dark personal horror. Our first moment meeting the character he’s expected to kill a sheep with a bolt gun.  This scene early on definitely makes it clear that this is not a film for the kids necessarily but definitely shines a light on the fact that some kids are forced to turn their back on their childhood and grow up far too soon. Beverly (Sophia Lillis) is in the same boat as Mike where she is forced to grow up far too soon. She’s looked down upon by everyone in town, even has adults making unsettling advances on her, and when it comes to her interactions with her father, well, it’s damn near impossible not to love this character when you see her with her friends.  Lillis does so much with her performance as Beverly that you can only expect great things from her in the future. When it comes to casting the adult versions of these characters, you’re going to be hard pressed to find an adult who matches this talent, though my pick would be Amy Adams.  The face that most will recognize from the group is Finn Wolfhard, who plays Richie.  Wolfhard has had some success as one of the stars in Stranger Things, and here he does a great job at being the funny man of the group. Matching Richie with the comedic jabs is Eddie (Jack Dylan Grazer), who I thought was the scene-stealer in the group. But if there is a character in the group that I felt was lacking, it is Bill (Jaeden Lieberher) who is mostly the leader of the group, but unfortunately just doesn’t have the presence that reflects the role.  To a larger degree it seems more that the group goes along with his decisions simply because they feel obligated, since he’s the one who lost his brother. There’s Ben (Jeremy Ray Taylor), who is the new kid at the school who has his not-so-secret crush on Beverly, and then there is Stanley (Wyatt Oleff), the quiet but practical one of the group.

It is presented in its original aspect ratio of 2.40:1. The ultra-high-definition 2160p image is arrived at by an HEVC codec with an average bitrate of 55 mbps. Contrast and detail are the pillars on which this ultra-high-definition presentation thrives. It’s that HDR ability to allow both bright and dark spaces to coexist that bring out the most haunting moments. The confrontation between Georgie and Pennywise is a wonderful example. The creature’s clown face shines in brilliantly bright detail without disturbing the pitch-blackness of the surrounding sewer. This is the kind of atmosphere that makes this transfer stand out. Colors are vibrant only when they are intended to be. The red balloons offer bright reds without over-saturation to retain a creepy realistic look. The surfaces have nice texture that brings the old house alive for the viewer. Black levels are inky with plenty of eerie shadow definition, a true requirement for this movie.

The Dolby Atmos presentation defaults to a spooky 7.1 track. There is tremendously effective surround placement here. Atmosphere is supported by the slightest breath of the creature or the prattle of rain. Voices and creaks bring the old house to live for the film’s most immersive experience. Subs are rich and powerful, but not just for the requisite jump scenes. There is a nice bottom to the audio presentation that allows nice depth and power. Dialog comes through quite nicely. The score can be rather dynamic and fills the entire space or sits back and lets the silence soak in for a while.

Deleted Scenes: (15:18) There are 11 with no play-all option. The first is actually a clever joke deleted scene.

Pennywise Lives: (16:25) This behind-the-scenes-rich feature focuses on the creature and the actor who portrays him. We get a glimpse of the casting process, and Skarsgard gives us an intimate look into his process.

The Loser’s Club: (15:42) Meet the kids who star in the film in another behind-the-scenes feature. They talk about their chemistry and relationship with each other. You get a lot of the bonding process and plenty of them having fun on the set.

Author Of Fear: (13:51) Stephen King talks about writing the book and the themes he explored during the process.

Brent Lorentson is a horror writer and film critic based out of Tampa, Florida. With a BA in Digital Film, he co-wrote and co-directed Scavenger Hunt. His short stories have appeared in various horror anthologies. In 2019 his short script Fertile Blood will be a part of the anthology horror film Slumber Party. He is currently working on his first novel A Dark and Secret Place set to be released in late 2019. Favorite Films: Taxi Driver, Fight Club, I Saw the Devil, The Wild Bunch, Dawn of the Dead, A Clockwork Orange, Pulp Fiction, Heathers, The Monster Squad, and High Fidelity.
The Houses October Built 2 (Blu-ray) Crazy Famous