Posted in: Disc Reviews by Michael Durr on February 14th, 2018 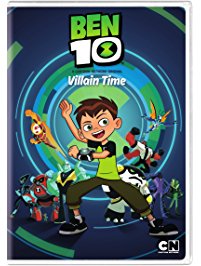 New cartoon series these days are a hard watch for me. Gone are the days of classic shows like X-Men, Batman: The Animated Series and even newer favorites like Regular Show which ended about a year ago. Now we get shows where it seems like it is one cheap joke after another including Teen Titans Go and that show about some kid named Steven. So, I wasn’t too thrilled to get the newest incarnation of Ben 10 on my review desk a couple of weeks ago. That’s when I decided to employ the talents of my 2 year old son, Keaton and see if he can offer some insight.

“Thomas”…no son, we can’t watch Thomas (The Train) right now. We have to review Ben 10, there are twenty episodes on this thing, see if you like it or not. “BeNNN.” Yep, I hand my son the dvd case. He breaks open the stark white case and gives me the disc. “Thomas” Used to this exchange, I go ahead and put the dvd in the player and it brings up the menu. I select English subtitles, and then go to play the first episode. My son blinks at the opening and decides to sit down on the couch with his thumb in his mouth. He points, “Elmo?”, he asks inquiringly. “No, BeNNN.” He doesn’t say anything else at this point and keeps sucking his thumb while looking at the screen.

The first episode, The Filth comes up. It starts out at the splendid old town of Destruction Flats, the #1 Nuclear Testing town. We see a security guard tied up while two criminals are attempting to steal some waste for a nefarious plot. The camera pans back and the two men are actually bug men or rather one bug man with a human face and bug body and the other, a bug face and human body. They almost have enough waste but will need more to complete their mission.

While they contemplate their next move, we join Gwen Tennyson and her grandpa, Max Tennyson inside their RV. They are attempting to clean up the vehicle and make it spotless but one factor is in their way from making it fresh as a daisy, Ben. Ben Tennyson also known as Ben 10 in one of his alien costumes (reminds me of the alien from American Dad) is eating junk food and mooching off the wi-fi.

In the midst of mess making, Ben is told by his grandfather that he needs to clean up. He is given a stack of chores as the grandpa and sister go off to the Bat Guano caves. I stop for a moment and think about telling my son what bat guano is but realize I don’t want him saying “crap” for the next 24 to 48 hours. So we continue and this episode eventually devolves into Ben 10 (and his various alien forms) taking on the bug guys. Not to spoil anything but I think it involves maggots and getting money from Vegas, I’m not really sure.

The second episode, entitled Waterfilter is about the family’s trip to Niagara Falls. The trip is going well until an ill-fated cannonball wakes up a Hydromander which unleashes an unsettling string of events. It’s about this time where my son starts fidgeting and any patience he had for the show is long gone. The third episode, The Ring Leader is an episode about Ben becoming bored of wrestling video games and decides to enter his own real life wrestling tournament. Iron Kyle is present to give Ben a tough challenge on his way to the top of the federation.

Somewhere in the third episode, my son decided to have his own wrestling match with me. This involved the usual belly flops onto the couch, biting and frantic cries of “Thomas Thomas” to get my attention while I do my best to subdue him. Momma (my lovely wife) comes in hearing the screaming assuming the worst and decides to take him away to his room. Meanwhile, I guess I’m here alone with my thoughts.

The show is not very good at all. I vaguely remember the original Ben 10 show (this is probably the 5th iteration) and it had a good dose of adventure and interesting plot lines. Well, those who have fond memories of the show should probably put this dvd disc back in the $9.96 DVD section at their local Walmart. The interesting adventure has been replaced by idiotic stories and silly potty jokes. Think Teen Titans Go with a lot worse humor.

Episodes involve weird nannies, insane clowns and wizard cos-players who becomes real wizards, and those are the better ones. I get that the show has now been toned down for the real little ones (age 5ish I would say) but my kid is nearly three and he was done with it by the second episode. This is the same kid who will watch Thomas The Train, Sesame Street, or any of the Despicable Me movies for hours if we actually let him in near silence. He can watch an hour long nature show about tiny forest creatures without so much of a peep. But twenty minutes of Ben 10? He wants to tear my head off. Something is wrong there.

The video is presented in 1.78:1 Widescreen, par for the course in the day of HD cartoons. Honestly, it could have been in standard 1:33 full frame and I wouldn’t have known a lick of difference. Ben and his various alien forms are nicely animated but the budget for interesting backgrounds was practically absent. It’s usually a single color with squiggles and maybe one or two landmarks at best. It fits the running Teen Titans Go comparison but makes most people tire of the show quickly once they get beyond the bad jokes. I guess the dvd does its job, but the presentation is average at best.

The show is also presented in a very basic Dolby Digital 2.0 with English subtitles that you can turn on or off. The dialog is clear and one should not have any trouble with the conversation even when its a few bugs going back and forth. Fights are modest at best and unfortunately it is not anything that is going to give your speakers a reasonable boost. It’s slapstick, not surrounding magic on the ole speakers. It serves the purpose.

Unfortunately, no Special Features were included.

A thought about the show’s premise. If I’m reading into this right, Grandpa and the two kids, Gwen and Ben ride around in this RV for their summer vacation and they have all of these crazy adventures. That sounds an awful lot like they are vagabonds roaming from place to place and Grandpa Max is out of work. Where is a CPS worker when you actually need them? What’s worse is that this show after 40 episodes (20 are contained here) is actually getting a second season of 40 more. At least my son proved that not all kids in the intended audience actually enjoyed the show.

The show’s technical merits aren’t much stronger. Average video, average sound, and a complete lack of extras make this the kinda show that you will stick in your dvd player after your son runs through seven seasons of Thomas the Train on Amazon Prime just because he needs a break. “Percy, Percy…” (the green train). Yes son, I suppose it is that time again. Ben 10 does not come recommended unfortunately and I must be off. “They’re 2 they’re 4 they’re 6 they’re 8, shunting trucks and hauling freight, red and green brown and blue, they’re the really useful crew…” Never gets old, enjoy.

Episodes
The Filth
Waterfilter
The Ringleader
Riding the Storm Out
The Clocktopus
Take 10
Growing Pains
Shhh!
Brief Career of Lucky Girl
Animo Farm
Clown College
Adventures in Babysitting
Something I Ate
Steam is the Word
The Beast Inside
All Wet
Villain Time
Drive You Crazy
Tomorrow Today
Story, Bored

Michael Durr has been reviewing movies for the better part of fifteen years now. He primarily enjoys thrillers, sci-fi, animation and even a little courtroom drama. His favorite films include Escape from New York, the Goonies and anything with Alyssa Milano. When he’s not praising Kurt Russell as the greatest actor of our time or scratching his head over a David Lynch flick, he’s spending time at home in Texas with his lovely wife, Lori and his amazing son. How they put up with him is a mystery, but even Basil Rathbone doesn’t have the time to solve that one.
Tuesday Round Up: February 13, 2018 Broad City: Season 4