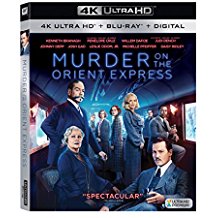 I have to start by talking about the mustache. You’ve probably already seen the outrageous facial hair Kenneth Branagh rocks as Hercules Poirot, the brilliant Belgian detective who appeared in 33 Agatha Christie novels (including 1934’s Murder on the Orient Express). But it is truly a sight to behold on the big screen! Up close, it looks like a fake, ridiculously twirly mustache has been layered on top of an even longer fake, ridiculously twirly mustache. I bring this up because the two things that truly separate this sumptuous, all-star take on Poirot’s most famous case from previous (and superior) adaptations are the film’s eye-popping production values and…well, Branagh’s mustache.

That’s actually where we catch up with Poirot (Branagh) in this new Murder on the Orient Express: the year is 1934, and the detective’s sleuthing has made him famous around the world. The film opens with Poirot solving a case in Jerusalem, and the prologue also establishes Poirot’s world-class fastidiousness as he searches for perfectly compatible boiled eggs for breakfast. But at this point in time, Poirot is weary of his fame and, more specifically, occupying the head space of killers in order to catch them. He is very much looking forward to a well-earned holiday when he gets word that a case in London demands his immediate attention. So it’s time to catch a train.

Even though the Orient Express is unexpectedly booked to capacity, Poirot’s friend Bouc (Tom Bateman) — who happens to be the famous train’s director — secures him a spot. The colorful cast of fellow passengers includes a very shady businessman named Samuel Ratchett (Johnny Depp), who is traveling with his accountant (Josh Gad) and a valet (Derek Jacobi). Poirot also encounters a governess (Daisy Ridley) and an African-American doctor (Leslie Odom, Jr.) who seemed surprisingly familiar with each other prior to boarding the train. Additionally, the Orient Express is transporting a husband-hunting widow (Michelle Pfeiffer), a pious missionary (Penelope Cruz), a Russian princess (Judi Dench) with a German maid (Olivia Colman), a hostile professor (Willem Dafoe), and others. After the train is temporarily derailed by an avalanche, a dead body is discovered. The victim was brutally stabbed to death 12 times.

In addition to starring as Poirot, Branagh directed this new take on Orient Express. Almost 45 minutes pass before the titular Murder takes place. We spend a decent amount of that time getting to know some of the major players, but the character that Branagh treats with the most care and loving detail is…the Orient Express! Besides the lavish production design — this movie made me wish that fancy train travel made a comeback — Branagh’s camera (via cinematographer Haris Zambarloukos) glides through and hovers above the proceedings. (Orient Express is one of two high-profile 2017 releases shot in 65mm film; the other is Christopher Nolan’s Dunkirk, which co-starred Branagh.) One of the low-key standout moments early on is the tracking shot where Poirot boards the train and has mundane interactions with practically every important character. The director also occasionally offers a detached, bird’s-eye view of the investigation when Poirot goes into work mode.

Even though I feel the story has holes — if I’m the killer and I see that the world’s greatest detective boarded my train, I’m re-thinking my elaborate murder plot…and I’m certainly not goading Poirot — this is actually a pretty faithful adaptation of Christie’s novel. So anyone who is familiar with the material won’t be surprised by the movie’s resolution. The most significant change here is making the doctor a black man, which alters how other characters view him and adds a hint of danger to his connection with a fellow passenger. (It’s a relief that Odom’s casting hasn’t generated a whiff of pre-release controversy…or that the filmmakers aren’t patting themselves on the back for their colorblind choice.)

Murder on the Orient Express has been adapted many times before. The most famous version is probably Sidney Lumet’s 1974 movie, which featured an even-higher-wattage cast. While I’m sure the famous names are there for box office reasons, it also works story-wise, since practically every passenger on the Orient Express is putting on a performance or tweaking their persona.

Branagh is obviously the leader of this cast, and he delivers Poirot’s wittier lines with aplomb. However, the mustache ends up doing too much of the heavy lifting, and its sheer absurdity undermines him when things get serious. (And he certainly can’t hold a candle to David Suchet’s universally acclaimed take on the character, which included a small-screen version of Orient Express.)

Elsewhere, Depp seems to relish playing a scumbag…even though his character’s creepy mustache is a distant second to Branagh’s. While Branagh generously gives his fellow actors at least one moment to shine, the standouts here include a steely Ridley holding her own whenever the governess gets grilled by Poirot, Odom bringing heart and poise to the conflicted doctor, and Pfeiffer alternately masking or revealing her movie-star presence to solid effect.

Murder On The Orient Express is presented in an aspect ratio of 2.39:1. The ultra-high-definition 2160p  image is arrived at by an HEVC codec with an average bitrate of 60 mbps. This is a good candidate for a 4K release. Branagh shot the movie on 65mm film. Most folks don’t appear to understand that a film shot today on digital is almost always shot at 2K, while a film shot in 35mm has a native resolution of 4K. It’s much higher for a film shot in 65 or 70mm. So when you’re getting a film in UHD that is a current release, it was most certainly upgraded to 4K from an original 2K source. That’s not true here, and it shows. Colors are much fuller, and there is a texture to the film itself that simply can’t be simulated. This film delivers a nice contrast in styles. The exteriors of the train present cold colors that peak high in the blues and whites. Inside the train the color temp becomes a nice warm style that suits the period piece with mellow yellows and deep earth tones. The superior textures bring the costume design to life, which adds that extra dimension of realism to the overall video presentation. Blacks are very sweet with multiple layers of shadow definition. Sharpness delivers the extra attention to details in the production design. Whatever the quality of the movie itself, it’s certainly rather nice to look at and this UHD release captures all of those aspects of style.

The Dolby Atmos presentation defaults to a subtle 7.1 track. This isn’t going to be an aggressive mix, and you might dismiss the 7.1 track as unnecessary. The film is dominated by dialog, and that neatly fills the center space, while the score and main audio complements from the two mains. The additional tracks really provide a fullness with the occasional sudden sound to keep you within the cramped spaces of the train. The subs add only depth to everything from dialog to the movement of the train. Here the surrounds add the expected click/clack and the rushing scenery. Subs also get their moment to shine when the avalanche derails the train. Outside wind finishes the atmosphere delivered by the surrounds. The score is often rousing and a bit hypnotic like the sounds of a train’s wheels in motion. There is a moment near the start where the score appears lifted directly from the EPCOT ride Soarin‘. It’s all nicely spaced and balanced so that everything cuts through in its natural place and volume.

There is an Audio Commentary by Director/actor Kenneth Branagh and screenwriter Michael Green. It’s pretty scene-specific with background enough to keep you informed throughout.

There is an impressive collection of extras here that do more than simple promotion or brief flybys of the production.

Deleted Scenes: (16:40) There are 13 with a play-all option. You also have an optional commentary by Branagh.

Agatha Christie – An Intimate Portrait: (19:03) This is a nice feature on the prolific mystery writer. Surviving family members share their memories. You get audio interview segments from the writer herself. There is also some family home movie footage and plenty of vintage stills.

Let’s Talk About Hercule Poirot: (9:54) Some of the same participants share their thoughts on the famous fictional detective. There’s a lot of time spent talking about Branagh’s interpretation of iconic moustache.

The Usual Suspects: For some reason this feature on the cast and characters is broken up into three parts. That in and of itself is not so unusual. Here the three parts are placed seemingly randomly throughout the extras menu. Each runs about five minutes.

The Art Of Murder: (16:22) This is the typical behind-the-scenes feature. The focus is on production and costume design. You get a look at the practical sets with the focus on the construction of the train both in interior and exterior forms.

All Aboard – Filming The Orient Express: (16:35) This is basically a continuation of more behind-the-scenes material. Branagh talks extensively on his reasons for using 65mm film rather than digital. We also get a pretty good idea of the logistics behind the decision, from using large bulky cameras to finding labs to process the actual film. I still think it was a great choice, and you’ll learn a little about that choice here. He also was the first filmmaker to use large LED screens for the passing scenery outside the train windows. That was usually done with green screen, but this method is amazing. You’ll see how he tested the process and got the go-ahead to use it. There’s also some conceptual art and a segment on the stunt choreography.

Music Of Murder: (7:31) Composer Patrick Doyle leads this feature on the film’s score. You get to see some orchestra rehearsal and recording footage.