Posted in: Disc Reviews by Gino Sassani on March 2nd, 2018 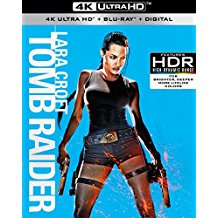 It’s been nearly 15 years since the last Tomb Raider movie was released. The franchise continues to be a popular video game series, and another film was inevitable. 2018 finally sees the release of a reboot of the title with a new actress playing the iconic Lara Croft. There’s a lot of anticipation and box office potential here. What better time for Paramount to shake the dust off of their own relics and see if a UHD release in 4K could both create some new interest and ride along a little on the coattails of the big-budget reboot. It’s good timing, and these are certainly two films that might benefit from the 4K upgrade. So now you have a little excuse to look backwards before you buy your ticket for the next chapter in the Tomb Raider franchise.

We first meet Lara Croft (Jolie) fighting a sophisticated robot in an attempt to obtain some kind of relic on a pedestal. Of course, this turns out to be her own version of the Kobayashi Maru scenario. It is a great chance to introduce us to her skills and rather flippant attitude. It’s also a chance for the audience to marvel at her wealth and resources and meet her two important sidekicks. Bryce (Taylor) is a young computer and engineering genius who lives in a trailer on the estate grounds. He created the aforementioned killer robot and supplies Croft with all sorts of clever gadgets. Hillary (Barrie) is the butler who hopes to make a true “lady” out of the tomboy Croft. This has been her family since the death 16 years earlier of her father, who was a renowned archeologist. She’s feeling particularly lonely as the day marks the anniversary of his death.

But it’s not just the anniversary of the death of Lord Richard Croft (Voight) that is marked by the current time. The planets are days away from an historic alignment capped off by a solar eclipse. It’s a series of events that happens only once every 5000 years. The event has begun a series of events that starts with her discovery of a hidden clock that has just now come to life. It’s her father’s legacy and a key to finding the pieces of a mythical triangle that can bestow god-like powers over space and time when assembled in just the right way at just the right location at just the right moment. Obviously, there are others who want this key and claim those powers. One of those hired to beat Croft to the prize is an old friend and rival Alex West, played by future James Bond Daniel Craig. The film does a bit of globetrotting as the two competing factions race to get to certain puzzles at certain times. Solutions have to be riddled out, and it all leads to a massive device that will solve the final piece of the puzzle.

As you can well imagine, the film owes quite a bit to the Indiana Jones movies. The key and triangle act as suitable Macguffin, and there are the ancient traps that have to be safely manipulated. The Tomb Raider series adds a bit more of the supernatural and even mythic creatures to the mix. There is also a lot of a James Bond vibe going on here. It’s likely no coincidence that Tomb Raider was Daniel Craig’s first real feature film role and likely was the first time he came to the notice of his future Bond employers. His character even carries a Walther PPK just like James Bond traditionally carries. There’s even a scene, although lacking Craig’s participation, that involves an Aston Martin. Craig has plenty of chances here to give an audience an advance peek at him in Bond-like situations and poses. He very good here and helps to keep a lot of the outlandish elements of the film from spiraling out of control for the audience. There’s good chemistry between Craig and Jolie, so much so that it surprises me that she never showed up as a Bong Girl during his tenure in the role. That could have been a sweet match-up.

The film serves as a memorable point in time for actress Jolie and her actor father Jon Voight. The two have had an estrangement of sorts over political beliefs. They are both outspoken polar opposites in the political spectrum. For years they had no communication. The movie was an opportunity for them to work together, which both apparently embraced. And while they shared only one scene together, there was a bit of a reconciliation between the two that, sadly, did not endure.

Director Simon West had a pretty tough job bringing such an iconic video game character to the screen, and he mostly succeeded. The film absolutely captures many of the huge set pieces and exotic locations that are trademarks of the game. There are truly some giant action moments in the film. West made one rather laughable mistake, however. While Jolie was actually a pretty good choice for the role, in most aspects she did not share certain physical attributes with the game character. The game’s Lara Croft is most widely recognizable for a huge protruding chest-line underneath her tight tops. In a video game, such unrealistic proportions work fine. In a live-action film, that’s a bit more problematic. Jolie was outfitted with an inflatable bust that gave her the appropriate dimensions, but it didn’t function all that well in continuity. Her bust size changes from scene to scene, as the level of inflation wasn’t so constant. Today it’s a bit of a joke and easily forgiven. Not so much at the time. In the sequel it was quickly decided to abandon the device and allow Jolie’s own attributes speak for themselves.

Lara Croft: Tomb Raider is presented in an aspect ratio of 2.35:1. The ultra-high-definition 2160p  image is arrived at by an HEVC codec with an average bitrate of 60 mbps. There is evidence of excessive DNR on this release that isn’t so prominent on the Blu-ray. Its textures and detail that the UHD manages to bring out that might have been a bit lost in previous releases. There’s some nice production design here that deserves to be put in a better light, and it certainly gets that chance here. Black levels are the star. You get some sweet shadow definition and deep blacks. Colors don’t pop, but they weren’t really filmed that way. There are even moments where the film looks almost monochromatic. It’ obvious that her signature costume was meant to take advantage of those choices. Gone is the gray shimmering that was so distracting even on the Blu-ray.

The film sports a bit of a disappointing DTS HD- MA 5.1 track. I’m not sure why it was decided to use this over a typical UHD codec. The result is a mediocre audio presentation that serves the dialog well, but little else. The surrounds aren’t very dynamic and there are rarely moments when the presentation is able to immerse one in the action. The score manages to get the most out of what little is provided here. Subs never reach the wonderful potential that these set-pieces and scenes provide. It’s obvious that the budget for this upgrade was nominal, at best.

The extras are all on the Blu-ray copy of the film. The only things you will find here are a repeat of the original Blu-ray extras which are, unfortunately also a repeat of the DVD features. They are all in terribly distorted standard definition and not likely the reason you would buy this release.

All of us are waiting to see what Alicia Vikander can do in the role. There’s been enough time and distance to give her the chance to make the part her own. I suspect big shifts in tone and pacing in the upcoming film. These will likely stand as something very different in comparison. They have their place, certainly. “So, time to save the universe again then, is it?”

Gino Sassani is a member of the Southeastern Film Critic's Association (SEFCA). He is a film and television critic based in Tampa, Florida. He's also the Senior Editor here at Upcomingdiscs. Gino started reviewing films in the early 1990's as a segment of his local television show Focus. He's an award-winning recording artist for Omega Records. Gino is currently working on his 8th album Merchants & Mercenaries. Gino took over Upcomingdiscs Dec 1, 2008. He works out of a home theater he calls The Reel World. Favorite films: The Godfather, The Godfather Part II, The Body Snatcher (Val Lewton film with Karloff and Lugosi, not the pod people film), Unforgiven, Gladiator, The Lion King, Jaws, Son Of Frankenstein, The Good, The Bad And The Ugly, and Monsters, Inc.
Murder On The Orient Express (UHD Blu-ray) (4K) Lara Croft Tomb Raider: The Cradle of Life (UHD Blu-ray) (4K)