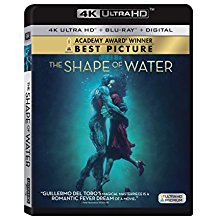 A couple of years ago I talked to Joe Dante about a variety of subjects. One of them was The Creature From The Black Lagoon. Dante along with several other directors like John Carpenter had once been attached to a remake of the Universal classic. I asked him why it never worked out. He told me it was the suit. We agreed that no one could ever improve upon the original design and that the temptation would be to go computer-generated, and that would be a bit of a shame no matter what it looked like. Andy Serkis has changed my mind a bit over the years, but along came Guillermo del Toro to restore my faith in the idea of a man in a costume once again. Del Toro is a self-avowed fan of the Universal horror films and has thrown his hat into the Creature ring in the past. Universal didn’t quite see it then. They had their own Dark Universe plans. Now I’ve had the chance to see The Mummy as part of the Dark Universe and was instantly underwhelmed. But after seeing del Toro’s The Shape Of Water, I think it’s time Universal took another look at their Creature From The Black Lagoon plans. Bang it here to listen to that Joe Dante chat: Joe Dante Interview.

It’s the height of The Cold War and Elisa (Hawkins) is a mute, lonely woman who works as a cleaning lady at a secret government installation that has just received its latest “asset” for study. Elisa and her friend and co-worker Zelda (Spencer) are shocked and frightened when the project’s security head, Richard Strickland (Shannon) rushes from the secure lab bloody and missing a couple of fingers. They are rushed into the lab to clean up, and Elisa endears herself somewhat to Strickland when she finds his fingers during the cleanup. But the real connection she makes is with the “asset” himself. It’s an aquatic creature found in the Amazon and brought here for study under fears the Soviets want to get their hands on him for their own studies. Elisa feels empathy for the creature almost instantly. She ends up bringing her lunch to the lab on a regular basis and shares eggs with him, all the while teaching him sign language. All of this, of course, happens without Strickland noticing until Elisa and Zelda conspire to rescue the creature, who is now scheduled for dissection. With the help of a scientist with a conscience, Dr. Hoffstetler (Stuhlbarg), they manage to sneak the creature out.

The film takes place in the past, but it also takes place in a bit of a different world. Del Toro washes the film with deeply saturated colors that add to the fairy-tale element of the piece. There’s always this sense of once-upon-a-time throughout the film. There are obvious elements of Beauty And The Beast in the dynamic between the two. It’s also a very quiet film. The relationship between Elisa and the creature plays out in sign language and wonderfully nuanced facial and body expressions. The real magic is the incredible chemistry played out between them in almost complete silence. The score contains equally magical tones and melodies that add a bit more to the emotional center that is this relationship. It’s easy to get carried away in this world.

The cast is quite brilliant. Elisa has a neighbor who is a commercial artist. Richard Jenkins is rather compelling as an elderly man who is very much a child in the presence of Elisa. She cares for him and makes sure he eats and takes care of himself. It’s a nicely played symbiotic relationship. While he depends on her, she is starved for attention and needs someone to take care of. So there is a nice chemistry going on from the beginning of the film between Sally Hawkins and Richard Jenkins. He ends up drawn into the rescue operation as the guardian angel for Elisa and the creature. Of course, there’s Michael Shannon, who has shown himself to be quite a talented actor. This performance harkens back to his role of a neurotic federal agent. We see those jarring violent outbursts that appear so normal for this character. I can easily see these guys as the same character. He’s under fire to get the creature back and is so self-important that he can’t really see a mute cleaning lady as the culprit. It certainly has to be a foreign strike team.

The suit design is something special. It’s an original design that certainly draws its inspiration from the Universal Creature. Doug Jones is the man inside the suit. He’s made quite a career out of bringing these elaborate suits to life. Del Toro has used him often, most notably as Abe Sapien. Jones works a lot, and this kind of performance is why he does. It’s got to be hard to make such an emotional creature out of a suit, but he does it to the point that you easily forget that it’s a suit and accept the creation as a character with feelings and motivations. In a way Del Toro and Jones get you to actually feel what Elisa feels for the creature.

Del Toro has tried the big-budget anchor films, and they tend to not be his best work. This is an example of what he truly does well. This fairy-tale kind of story and world plays right into his own abilities and style. I love the Cold War 1960’s atmosphere which is just a little bit “off”. Just enough to take us out of a real world. Del Toro’s film creates wonderful little nuances to color that world even more into a special kind of fantastic place. Elisa lives above a theatre that shows movies 24 hours a day to nearly empty rooms. There’s a chocolate factory on fire just down the street. Del Toro is a product of that early film and television era, and he uses these screens to accent the story he’s telling. Pay attention to the television and film screens inside this movie and you’ll be treated to a world just that much more fantastic. There are elements like a pie shop that artist Giles keeps visiting to make an impression on a worker there even though the pies are horrible. The film is so loaded with these kinds of quirky moments and characters that you find yourself paying attention to every bit of it.

The Shape Of Water is presented in an aspect ratio of 1.85:1. The ultra-high-definition 2160p  image is arrived at by an HEVC codec with an average bitrate of 60-65 mbps. Del Toro is known for creating different worlds with his use of colors and texture. This is a film awash in textures. Every detail tells its own story. That’s why contrast is so important here. It’s a quite monochromatic world in many ways, until it’s not. Reds and greens particularly pierce through the dark atmosphere to create important saturated moods in the story. It’s as if this film bleeds colors just when it’s needed to change the atmosphere enough to guide the audience to another emotion. Black levels are sweet with layer upon layer of blacks and grays to deliver plenty of shadow definition. This is a visually rich film that thrives with the HDR/4K treatment.

The DTS-HD MA 5.1 presentation isn’t the Atmos or DTS:X one expects with UHD. It does work better than most here. This is a very quiet film at times and is never an aggressive surround event. Dialog plays the most important role here, and it’s handled perfectly. There’s a good amount of sub response here that helps to fill the entire audio presentation, and it all blends seamlessly into the overall atmosphere. This film is an immersive experience, but it’s through a subdued audio that this becomes most effective.

A Fairy Tale For Troubled Times: (28:55) This is the behind-the-scenes feature and can be played in four parts with a helpful play-all option. The parts cover the general idea and story that is pretty much a cast and crew love-fest for Del Toro. There’s a very nice section on the creature that provides conceptual art and allows us to see the suit process from design to testing. The third segment covers production design from props and sets to costumes. Finally, we get a look at the score and orchestra recording sessions.

Anatomy Of A Scene: Prologue/The Dance: The two scenes are broken down by Del Toro.

Shaping Waves – A Conversation With James Jean: (5:05) This is a conversation with an artist who created an alternate poster for the film.

Guillermo Del Toro’s Master Class: (13:27) Del Toro and members of his production team offer film students some detailed insight into the technical aspects of the movie after they have screened it. It’s kind of like a panel discussion, but more like a class lecture.

Yes, at its heart this rather dark fairy tale is a story of love and self-discovery. The relationship between the two gets rather a bit too graphic for me at times. There is also a look inside of Elisa’s mind that recalls the old MGM musicals that was over-the-top, in my opinion. It’s when the film stays on course with these odd circumstances that it approaches complete genius. Del Toro has tried the mainstream thing, and it’s not the place where he can tell the kind of story only he can tell. He tells dark fables. “We can’t ask him to be anything else.”

Gino Sassani is a member of the Southeastern Film Critic's Association (SEFCA). He is a film and television critic based in Tampa, Florida. He's also the Senior Editor here at Upcomingdiscs. Gino started reviewing films in the early 1990's as a segment of his local television show Focus. He's an award-winning recording artist for Omega Records. Gino is currently working on his 8th album Merchants & Mercenaries. Gino took over Upcomingdiscs Dec 1, 2008. He works out of a home theater he calls The Reel World. Favorite films: The Godfather, The Godfather Part II, The Body Snatcher (Val Lewton film with Karloff and Lugosi, not the pod people film), Unforgiven, Gladiator, The Lion King, Jaws, Son Of Frankenstein, The Good, The Bad And The Ugly, and Monsters, Inc.
Justice League (UHD Blu-ray) (4K) Frank Serpico