Posted in: Disc Reviews by Brent Lorentson on April 6th, 2018 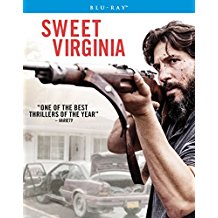 Ever since Jon Bernthal left The Walking Dead, he has managed to create quite the impressive resume over the years. From having some standout performances in Fury, Baby Driver and recently taking on the role of Frank Castle in The Punisher, he is easily making a name for himself.  Now we get to see him take on the role of Sam in the new small town indie thriller, Sweet Virginia.  In a film that is filled with well-crafted characters matched with some terrific performances by the cast, it’s a shame the film didn’t reach Blu-ray with more of a buzz around it. From the film’s violent opening, the film percolates with menace and unease to the final climax.

When we first meet Elwood (Christopher Abbott), it’s obvious there is something a little off about this guy, and it doesn’t take long before we see what the man is capable of.  To put it simply, this may be the most intimidating hitman we’ve seen on screen since the Coen Brothers gave us Anton Chigurh in No Country for Old Men. A bold statement, but as we see Elwood unravel on screen, we see a man who is desperately wanting to be accepted, whether it’s being a son or simply a friend, but the guy is a pillar of rage and violence.  And it’s when we see him show up to the motel as a guest and he’s trying to befriend Sam, you just know this will only end badly.

It’s Lila (Imogen Poots) who is responsible for bringing Elwood to town and the violence that he leaves in his wake. We see early on that she hired Elwood to kill her husband, but the repercussions that follow seem to affect everyone around her, and it shows how easily one bad decision can snowball into even worse decisions.

Then we have Bernadette (Rosemarie DeWitt), who is the widower Sam has been having an affair with.  How she struggles with mourning the loss of a husband and her desire to pursue Sam is well played.  She’s not a seductress or a malicious character by any stretch, she’s simply a woman who fell in love, and bad things occurred in the process.  It’s her performance that gives the film heart, but because of her character, you can’t avoid the sense of dread that follows as she feels free to pursue her relationship with Sam.

The characters and the dialog for this film are incredible. Factor in the great performances we get from the cast, and all you’d need is to point the camera at the actors and you’d have a watchable film.  But director Jamie M. Dagg brings a well-trained eye to this film that elevates this to the stature of neo-noir that is on par with the Coen Brothers.  I couldn’t help but think about Blood Simple while watching this. The film may not be as quirky, but instead it is much moodier.  The subject matter isn’t the only thing that is dark; the overall image is dark and gloomy throughout.  It’s simply pairing the visual to the subject matter that fits this so nicely.

My only complaint about this film is how low every character seems to talk.  Either characters are talking just above a whisper or we have characters that grumble their lines. It forced me to actually have to rewind a scene to understand what was said, even after I had cranked the volume up.  I understand that it fits the tone and style of the movie, but we still need to understand what the characters are saying without having to resort to turning the subtitles on.

Despite my one gripe with the film, this is definitely one of the best titles I’ve seen this year, and for those who enjoy a good thriller, Sweet Virginia is worth checking into.

Sweet Virginia is presented in the aspect ratio 2.40:1.  The 1080p image is arrived at with an AVC MPEG-4 codec at an average of 29 mbps.  Despite having some beautiful scenery for the Alaska backdrop, the film’s look is very subdued.  The film overall is very dark, not that it takes place at night, but instead it has a very natural look to it.  Between the dim lighting and overcast skies, the film does deliver plenty of depth in its darks and blacks.  The film’s soft focus and overall dark look does help lend to its noir feel and definitely plays a part to the film’s style and tone. Even the whites have had their brightness stripped away so that the only thing that genuinely pops on the screen are the solid performances.  There were no artifacts in this transfer, nor did I see any issues with the blacks being crushed.

The DTS HD-Master Audio 5.1 track is a bit difficult at times to hear clearly.  This is by far the only major problem I had with the film that I needed to crank the volume up just so I could hear and understand the dialog. This is a film that is driven by the performances, and when we get these characters talking, it gets a bit frustrating when you can’t understand them when they have exchanges where they seem to just grumble the dialog. As for the score and the ambient nature sound, it does add to the isolation of the quiet little town.

Sadly, there are no special features on the disc.

Every year there seem to be at least one or two thrillers that catch my eye and I that I fall in love with.  Right now it’s safe to say Sweet Virginia is one of them.  If you are a fan of the Coen Brothers, this is definitely a film worth checking out.  So why does it only get a 3.5 if I love it so much?  I can’t get past the need to have to turn up my volume and having to rewind a scene to understand what a character says, and it’s during some important character development when this occurs.  Nevertheless, this is still a movie worth checking out. Bernthal simply kills it in this movie and has me thinking he could possibly be this era’s Humphrey Bogart if he continues picking these great roles.

Brent Lorentson is a horror writer and film critic based out of Tampa, Florida. With a BA in Digital Film, he co-wrote and co-directed Scavenger Hunt. His short stories have appeared in various horror anthologies. In 2019 his short script Fertile Blood will be a part of the anthology horror film Slumber Party. He is currently working on his first novel A Dark and Secret Place set to be released in late 2019. Favorite Films: Taxi Driver, Fight Club, I Saw the Devil, The Wild Bunch, Dawn of the Dead, A Clockwork Orange, Pulp Fiction, Heathers, The Monster Squad, and High Fidelity.
Legion Season 1 (Blu-ray) A Quiet Place