Posted in: Disc Reviews by Gino Sassani on April 5th, 2018 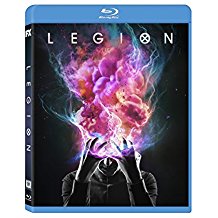 “And so we ran on. Into Summerland and the place they said did not exist. And all the while, wolves were at our heels. Black masks, boots and the one they called The Eye. We had come to do the work that must be done. To strip ourselves of the fog of life before.”

If the first season of Legion was intended to lift any fog, it failed miserably. In fact, keeping you in a fog is series creator Noah Hawley’s superpower. He was also the creator of the television adaptation of Fargo, which was often more than a little confusing. But with Legion Hawley has taken these “skills” to the next level, and how you respond to the series will absolutely depend on how much you like your brain messed with while you’re watching a show. If the answer is a lot, this is the perfect show for you.

Legion is based, very loosely, on the Marvel X-Men comic spinoff of the same name. David Haller was the son of Charles Xavier and had his mental powers, but with a twist. He also suffered from a multiple personality disorder, and each of these personalities had their own manifestation of power in addition to David’s mental powers. In the character’s short run in the comics, different personalities and powers developed as the story went along. The character was created by writer Chris Claremont and artist Bill Sienkiewics. They get the credit in the show’s opening, but this character and these stories are very different from the one found in the pages of a Marvel comic.

In this version David Haller (Stevens) has spent most of his life in a mental hospital called The Clockworks. He was committed after a suicide attempt and appears to be suffering from schizophrenia and severe hallucinations. What we quickly discover is that he’s the subject of study by a government agency tasked with dealing with the mutant “problem” called Division Three, and that he’s a very powerful mutant, perhaps the most powerful ever discovered. It all starts to come together when he meets patient Syd Barrett (Keller) in a big nod to the Pink Floyd co-founder who notoriously went insane and became the inspiration for much of the band’s mental-health-themed music over the years. This Syd is a woman who agrees to be his girlfriend with the stipulation that she not be touched, with good reason. She’s also a mutant who trades places temporarily with anyone with whom she comes into physical contact with. She helps David escape and brings him to Summerland, a mutant haven run by Dr. Melanie Bird (Smart). The idea is to help him accept and master his powers to aid in the brewing war between humans and mutants.

Helping David come to grips with his true nature are a number of mutants with specific powers. Ptonomy (Harris) is able to enter a person’s memories and bring others with him. They explore David’s memories leading to some odd and often psychedelic encounters in David’s past. Cary Loudermilk (Irwin) is the medical scientist who runs all of the impressive scans and creates the stunning gadgets. But he’s literally not alone. He shares his body with Kerry Loudermilk (Midthunder) who emerges from time to time as his lab assistant and also the kick-butt alter-ego. But both can exist at the same time.

All of this sounds very interesting, and it is to an extent. The problem is that the team doesn’t really interact with the outside world. Division Three searches for them but has limited interaction, and the promised war really fizzles throughout. The series spends almost the entirety of its limited eight episodes inside of David’s head where creator Hawley freely admits there are no rules. We’re assaulted by images that might or might not make any sense, and while I understand some of what he’s trying to do, the show fails to engage in the end, because it’s impossible to make any kind of connection with the on-screen world. Crazy stuff literally comes out of nowhere, and it becomes so muddled that it’s very difficult to maintain the intense attention and patience that ultimately fails to pay off.

The only thing that kept me engaged at all here is the performance of Dan Stevens. He was a huge get for Hawley, because he’s such an amazing performer. I was first captivated by Stevens as Charles Dickens in the wonderful The Man Who Invented Christmas, and he proves here that performance was no fluke. Stevens is compelling to watch and became my focal point to get past all of the noise that is most of the series. Stevens has a precision command over all of his body’s movements and can say a lot without uttering a word. He sells the insane turmoil that David goes through in both larges contortions and subtle nuances. He even manages to create some awkward chemistry with Rachel Keller as Syd. Unfortunately, even with all of this ability there isn’t a good enough connection established with the other characters. It’s a group that always appears forced and never a team. Mackenzie Gray deserves some honorable mention as Division Three’s pet mutant, The Eye. He’s basically a mutant tracker, and it appears, a possible mutant dampening field. I’m not quite sure. But the few moments he and Stevens are in a room together, the show suddenly explodes with great potential that never manages to sustain itself through Hawley’s self-indulgent sequences.

Each episode is presented in its original broadcast aspect ratio of 1.78:1. The 1080p image is arrived at with an AVC MPEG-4 codec. Fox made a wise decision to pack only four episodes on each disc. The result is something a bit better than what you likely got on television. This is certainly a visual experience, and the high definition image presentation captures it all for better or worse. It’s actually a rather dull landscape color-wise, but with Hawley’s many psychedelic journeys a splash of color will really pop. Most often it’s a rather bright red. Black levels are above average, and the detail is necessarily very high. The details really matter here, and I can’t imagine trying to watch this show in standard definition.

The DTS-HD Master Audio 5.1 another nice presentation. There’s almost as much ear candy here as the visual side of things. The sound design is impressive with stuff designed to keep you a little on edge. Much of this is accomplished through almost inaudible surrounds that manage to get your skin crawling a bit. Dialog is great with the exceptions of the times when it’s not supposed to be.

Deleted Scenes: (26:50) There are 11 from all of the episodes with no individual selection ability. Pay attention early on and you’ll see a Vulcan sitting at the card table at Clockworks, but it’s really quick.

Fractured Reality – A Different Kind Of Hero: (10:35) Cast and crew tell us that this isn’t your typical comics show. I could have told you that. In fact, I think I did. There’s one odd moment when they talk about keeping as many practical effects as they can and use as an example a scene they later show us is completely CG. Someone goofed in the editing department.

Promotional Features: These features are about 2-3 minutes and deal with characters, powers, makeup, f/x, costume design and locations.

I was very excited when this title arrived to be reviewed. I’m a fan of the X-Men universe and liked the films more than most appear to have. But if you’re looking for more of that here, like I was, you are in for a huge disappointment. The show has been picked up for a second season starting now. Unless Hawley can get out of his own headspace, I don’t see it going any longer. It won’t be long before even the most patient viewer gets disenchanted when he/she finally figures out that we aren’t in on the joke. I’m sure the cast and crew are having a great time doing the show. There’s so much promise here, but I’m afraid for this reviewer, “Malfunction detected”.

Gino Sassani is a member of the Southeastern Film Critic's Association (SEFCA). He is a film and television critic based in Tampa, Florida. He's also the Senior Editor here at Upcomingdiscs. Gino started reviewing films in the early 1990's as a segment of his local television show Focus. He's an award-winning recording artist for Omega Records. Gino is currently working on his 8th album Merchants & Mercenaries. Gino took over Upcomingdiscs Dec 1, 2008. He works out of a home theater he calls The Reel World. Favorite films: The Godfather, The Godfather Part II, The Body Snatcher (Val Lewton film with Karloff and Lugosi, not the pod people film), Unforgiven, Gladiator, The Lion King, Jaws, Son Of Frankenstein, The Good, The Bad And The Ugly, and Monsters, Inc.
Ferdinand (UHD Blu-ray) (4K) Sweet Virginia (Blu-ray)