The Strangers: Prey at Night (Blu-ray) 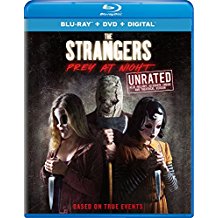 “Why are they doing this to us?”

Back in 2008, The Strangers stalked its way into theaters. The movie was an especially nasty bit of home invasion horror; its stunningly simple premise (three masked psychos terrorize doomed couple) and the random nature of its killings was both what the movie’s fans admired about it and what left its detractors wanting more. Ten years later, The Strangers: Prey at Night hits a lot of the same notes while incorporating a self-aware tone about horror movies and some ’80s-inspired flair. Call it The Strangers Things.

“What are you doing in my house?”

The movie’s deadly cold open quickly reacquaints us with the three killers from the original film: Man in the Mask (Damian Maffel), Dollface (Emma Bellomy), and Pinup Girl (Lea Enslin). It’s not unusual to go bigger for a sequel and Prey at Night is no exception. Instead of stalking a couple, the trio sets its sights on a family of four: Cindi and Mike (Christina Hendricks, Martin Henderson) are taking their teenage kids Kinsey and Luke (Bailee Madison, Lewis Pullman) on a mini getaway to a trailer park. The trip is meant to be one last chance for the family to bond before troublemaker Kinsey goes off to boarding school. When the family arrives, they find the trailer park completely abandoned…and soon find themselves fighting for their lives.

And that’s really all there is to a Strangers movie, at least story-wise. Just like its predecessor, Prey at Night claims to be “Based on True” events, although this sequel’s low-key cheeky tone ultimately makes that claim feel a little sarcastic. (Kinda how Fargo begins with “This is a true story.”) It’s more accurate to say — and this is actually written on the Blu-ray case — that this film was inspired by The Strangers. I can confirm that this sequel retains the straightforward and shamelessly sadistic spirit of the original. (The sequel was written by Bryan Bertino, who also directed the first movie, and Ben Katai.)

But how do you run back a movie like The Strangers and keep things interesting? Enter director Johannes Roberts (47 Meters Down), who is clearly a gleeful gorehound. Whereas the first Strangers was a spare home invasion thriller, Roberts appears to have taken inspiration from the killers’ masks by leaning into the slasher aspects of the film.

In short, the first movie was unsettling because it felt like something that could happen; with Prey at Night, Roberts eventually turns the killers into Michael Myers and Jason Vorhees. So it’s no surprise that the sequel relies on ’80s slasher films for its look (check out the slick, blood red lettering on the Prey at Night subtitle) and for its sound (Adrian Johnston’s synth-y soundtrack is boosted by some bombastic ’80s pop classics).

To be clear, the fact that Prey at Night was made by someone who loves horror movies doesn’t make some of the mind-numbingly stupid decisions by its characters any more palatable. In fact, the sequel’s style and low-key subversion of the genre doesn’t really blossom until its final flourish, which combines over-the-top melodrama with effectively brual action.

I haven’t said much about the performances yet because none of these people are really characters…they’re meat. I’ll always be a fan of Hendricks thanks to her stint on Mad Men, which is why I continue to be shocked and disappointed that she can’t land a meaty role on the big screen. Henderson consistently leaves me a bit underwhelmed, so I wasn’t exactly pulling for his character. In fact, it’s the two youngsters in the cast (Madison and Pullman), who acquit themselves quite nicely in the end.

Speaking of the end, the film leaves the door cracked open for a potential sequel. Guess you be better mark your calendar for sometime in 2028.

The Strangers: Prey at Night is presented in an aspect ratio of 2.40:1. The 1080p image is arrived at with an AVC MPEG-4 codec at an average of 36 mbps. It’s right there in the title: The Strangers don’t Prey in Broad Daylight, so the visual presentation here is uncommonly reliant on inky black levels. (To be fair, there is a brief, sunny exception when we first meet the ill-fated family.) Luckily, the disc is up to the challenge. Separation is strong here, which means we viewers have a better view of whatever is lurking in the shadows than the characters do. The presentation has an appropriately yellowish tint to it, which isn’t surprising given the artificial lighting. This isn’t the cleanest, sharpest presentation, but it gets the job done.

The DTS-HD Master Audio 5.1 track is impressively dynamic and lively, despite occasionally going off the rails. There’s some tremendous directionality on display, particularly during the instances when the masked killers startle the characters on screen (and us) by pounding on the door: the sound explodes from the corresponding side speaker and is punctuated by some good sub action. Elsewhere, the bombastic ’80s pop songs get the full breadth of the surround sound field. On the downside, I consistently found myself turning the volume way up to hear the dialogue before scrambling to turn it down when the kills and music came back into play. (Fortunately, the movie isn’t exactly heavy on dialogue.)

All of the bonus material is presented in HD. The “Unrated Edition” is exactly as long as the theatrical version of the film: a lean, mean 86 minutes.

Alternate Ending: (1:51) This alternate conclusion offers a more concrete answer about the fate of the movie’s masked killers. I prefer the more ambiguous theatrical ending.

A Look Inside The Strangers: Prey at Night: (1:50) A glorified trailer featuring input from stars Martin Henderson and Christina Hendricks.

Family Fights Back: (2:02) I thought this featurette was going to focus on the friskier characters in the movie, but instead it breaks down the dysfunctional dynamic of the movie’s doomed family.

The Music of Prey at Night: (2:46) Director Johannes Roberts excitedly talks about using classic 1980s tracks “Kids in America”, “Total Eclipse of the Heart”, and “Making Love Out of Nothing at All” to score some of the film’s most gruosome moments. The filmmaker also calls John Carpenter an inspiration, in terms of using music to heighten the impact of horror.

Whether you prefer the original Strangers or this sequel depends on what you’re looking for in a horror movie. There was absolutely nothing funny about the first film, which is what made it (for better or worse) a brutal experience. On the other hand, Prey at Night was clearly made by someone with style and a sense of humor.