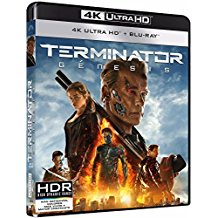 Like all reboots worth their salt, we start out at the beginning. This time around we get things from the perspective of Kyle Reese (Jai Courtney) as he recounts for his the events of Judgment Day as well as trying to survive alone in the ashes of a ruined world. Before long he crosses paths with John Connor (Jason Clarke), the leader of the Resistance and humanity’s one true hope. Idolizing him, Reese follows him, joining the Resistance and rising through the ranks to become Connor’s second in command. Throughout their time together, Reese feels a deep connection between himself and Connor, proven by Connor’s willingness to share details about his life as well as about his mother, things he does not share with anyone. Through their many battles, Reese recounts John’s skill and his tactical strategies that defy logic, almost as if he knows what will happen before it happens (wink wink).

During the siege to bring down Skynet, the Resistance discovers a time displacement device that Skynet has used to rig the game: send a Terminator back to kill John’s mother and erase him from the timeline. With the only option for John being to send someone back to protect his mother, Reese volunteers for the job. OK, now that I’ve rehashed a bunch of details you already knew, let’s hit pause for a second. This was probably the least enjoyable part of the film for him, and it’s not because of the story, but because this was part that any true-blue die-hard fan knows already.  It just has a clear autobiographical feel to it, being that it was information established over two decades ago. Fortunately there are a few cool things thrown in there to make it interesting, such as a few more interactions with future John Connor, given that most of the time when we hear about him it is through the prospective of others or the pre-apocalypse version of himself (with the exception of Terminator Salvation).

So Reese is sent back to October 1984 to protect Sarah Connor (Emilia Clarke), and this is where things get interesting; see, John is expecting a timid waitress with no idea of the things to come; that’s not what he gets.  Sarah is a locked-and-loaded warrior with skills that rival his own. Sarah quickly informs Reese that the timeline has changed, and that the past he thought he was traveling to does not exist any more. It is in that spirit she proposes her plan: if the past can change, so can the future. The two band together with a little advanced help of their own (good old Arnie) to destroy Skynet before it can ever be born.

Now let’s start with the most crucial point of this reboot: the cast. The new class had some big shoes to fill, all with the exception of Arnold, for whom this was just like a coming-home party. The production did right when they cast Emilia Clarke to recreate Linda Hamilton’s famed character. She already had the look, but how she would portray the character was my biggest concern when I learned about the movie — how Clarke would measure about in comparison. The answer: she was everything I hoped she would be in the role: strong, yet vulnerable when the situation calls for it. She was the heart of the story, and fortunately new territory was covered in this film, so she was able to make the character her own and deal with a brand new internal conflict such as the feeling that her life is out of her control. Clark’s performance was top-notch, but I think Jai Courtney had a bigger hurdle to jump over. Courtney’s character differs from the original, as in this film he is the fish out of water. He went back with the clear plan of what he needed to do, and when it’s taken away from him, he has to work doubly hard to be valuable, not to mention that there are things he is not privy to that he only just discovers this time around (you all know what I’m referring to). Courtney holds his own in this new and unfamiliar territory for his character. Last but not least, Mr. Schwarzenegger; as I mentioned earlier this must have felt like a coming-home party for the actor; however, I still feel I should acknowledge the challenge of reprising a role after a long absence. True that the Terminator character does not usually have much in the way of dialog; it is still important to maintain the same rhythm and tone, and I think we got that in spades. Plus he adds some good comic relief.

As I mentioned earlier, I think we covered some new ground in this one and got to see some aspects that haven’t really been touched on in early incarnations. Such as with Sarah Connor, we never got to see how she handles the knowledge that her future son is mankind’s only hope; to basically have all decisions in life stripped away and have no choices left in your own life. That may have been one of my favorite themes in this one, because it is a monumental thing to have to struggle with and adds depth to the already strong and charismatic character. There is one plot hole in my opinion regarding how Sarah and the Terminator came into each other’s lives. There is a brief explanation, but I just don’t feel like I fully grasp the how; could have done with a little more clarification.

There are a few pieces of recycled dialog; however, overall it is all brand new stuff.

Terminator: Genisys  is presented in an aspect ratio of 2.40:1. The ultra-high-definition 2160p  image is arrived at by an HEVC codec with an average bitrate of 55 mbps. This ultra-high-definition image presentation is pretty sweet. The depth of the image isn’t quite what I saw on the previous 3D release, but it’s impressive enough to make this my default disc of the film. Detail is off the charts with so much eye candy to take in. The close-ups of the Guardian version of Arnie reveal wonderful detail, adding to the effect of his performance measurably. The resolution bump also pays off in textures. You’ll find that particularly true of the ash in the future world and the grains of nano tech. There’s a nice contrast between the various times. The enormous computer-generated material blends flawlessly with the live action material. Yeah, there are a couple of pretty obvious exceptions. Black levels are excellent throughout.

The Dolby Atmos sound defaults to a Dolby Digital TrueHD 7.1 track. The first thing you’ll notice is the powerful subs. There are some truly room-shaking moments that maintain clarity. I didn’t find the surround as active as I expected. That doesn’t mean there aren’t a ton of subtle ambient kinds of things going on. The score has a ton of dynamic moments, and the familiar drumbeats of the original score are downright haunting at times. Throughout all of this carnage and volume, you’ll hear the dialog just fine. The balance is impressive as anything on a film of this kind of audio scope.

Family Dynamics: (15:51) This feature focuses on the actors and characters. Both cast and crew talk about casting process from both points of view. There’s a lot of talk about the international flavor of the cast.

Infiltration And Termination: (25:29) This is the full on behind-the-scenes feature. There’s a lot of good stuff here even if it is a bit brief. There’s a good bit of behind-the-camera footage. You get conceptual art, previz, and plenty of production footage. The feature talks about both the New Orleans and San Francisco locations.

Upgrades: (15:07) This is the f/x feature. You’ll get to see the various layers of some of the more impressive moments from the film. They even got James Cameron to talk about the original effects he used, and he also talked about the challenges of the new film.

Reset The Franchise – Constructing Terminator Genisys: (2:20:25) There are eight parts here with a handy play-all. Oddly two of the segments are direct copies of two features on the first disc. Otherwise it’s a pretty thorough look at the production of the film. There’s plenty of behind-the-scenes footage and plenty of input from the cast and crew.

Battle On The Bridge – Multi-Angle Scene Breakdown: (10:05) This takes the Golden Gate Bridge sequence and gives you all of the evolution from storyboards, pre-viz, stunts and f/x layers. You get two angles with a handy play-all for both.

You got your classic lines without which it wouldn’t be a Terminator movie (if you think hard enough, there is at least one common line we call can come up with). There was one piece of dialog that I was hoping would be in the movie describing a certain character that was left out, but I can live with that.

Jeremy Butler is a film school graduate of the International Academy of Design and Technology. He is been writing for Upcomingdiscs since 2012; however, movies have played a big part of his life for much longer. Favorite genres include horror, science fiction/fantasy, and comedy. Favorite movies are V for Vendetta, Boondocks Saints, Kiss Kiss Bang Bang, and The Godfather.
Every Day (Blu-ray) The Strangers: Prey at Night (Blu-ray)