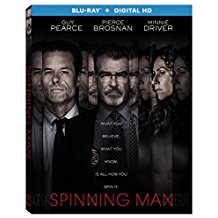 Even though he’s not anywhere close to the biggest name in Hollywood, Guy Pearce is low-key my favorite actor. The Aussie is probably best known for his starring role in Christopher Nolan’s Memento, the memory loss masterpiece in which Pearce played a man who tattooed helpful(?) clues and reminders all over his body. So when I realized he’d be playing another forgetful lead character in Spinning Man, I was hopeful. But despite some solid performances and interesting philosophical ideas, the film is too downbeat and dull to be an effective thriller.

“Hypothetical: student approaches you for a night of passion…all she wants is one night…do you comply?”

Pearce stars as Evan Birch, a doting dad and respected philosophy professor at a distinguished college. Professor Birch’s world is rocked when 17-year-old Joyce Bonner (Odeya Rush) goes missing near a local lake. The case is being investigated by the meticulous Detective Malloy (Pierce Brosnan), who zeroes in on Birch as his main suspect. Birch claims to have never met the girl, but a car matching his description was spotted at the crime scene around the time Joyce disappeared. There’s also the fact that Birch — who is chronically forgetful — isn’t totally cooperative or forthcoming when the police begin sniffing around, which raises the suspicions of his wife Ellen (Minnie Driver).

The movie is based on a novel by George Harrar, and it has been adapted for the screen by Swedish director Simon Kaijser. I didn’t read Harrar’s novel, but I can’t imagine it hit readers over the head as hard as the movie does in establishing Birch’s wonky memory. (We watch him struggle with names and dates, along with forgetting the reason he walked into room.) The movie is more effective when it takes us inside Professor Birch’s classroom to explore the concepts of truth, guilt, and responsibility from a philosophical point of view.

Overall, Kaijser also adds a few noir-ish touches in an effort to keep things interesting. The movie’s cool, bloodless palette works better than the heavy-handed motifs the filmmaker sprinkles in. In case you didn’t pick up on the notion that Birch and Malloy are playing a cat-and-mouse game, the director inserts an actual mouse as a beloved pet for one of the professor’s kids.

As the movie progresses and we learn more about his checkered past, Birch becomes an increasingly unreliable narrator. Pearce is great at alternating between fidgety and aggressive, which plays into the notion that Birch contains a side to his personality that might be hidden even from himself. I also really enjoyed Brosnan’s subdued work here: when I learned this movie was about a college professor with an eye for younger women, I thought the former 007 would be a more natural fit for the role. Instead, the actor serves as a confident and direct counterpoint to Pearce’s messier work as the uncertain Birch.

On the other hand, Driver is saddled with a completely thankless role: from the start of the movie, Ellen displays a chilly attitude toward her seemingly good-guy husband. (We eventually find out she has a good reason to have her guard up.) The problem is that when Birch comes under suspicion, there’s not much of an arc for Driver to play since Ellen already distrusts her husband. For those reasons, the character ends up being flat and a total drag. The good news is there are several small supporting turns — Clark Gregg as Birch’s pragmatic attorney, Jamie Kennedy as a lecherous fellow professor, Alexandra Shipp as a college student making eyes at Birch — that liven things up.

But ultimately it’s not enough to liven up the overall experience of sitting through Spinning Man, which ends with a preposterous, jumbled sequence that explains the movie’s title…and will likely have you rolling your eyes.

The Spinning Man is presented in an aspect ratio of 2.40:1. The 1080p image is arrived at with an AVC MPEG-4 codec at an average of 22 mbps. The movie favors a green, David Fincher-esque tint resulting in an image that is hazier than the typical modern HD presentation. That’s actually not a bad thing here, since the hazier palette reflects Professor Birch’s unclear memories. In fact, the overall presentation is pretty desaturated to mirror the downcast vibe of the characters: even idyllic flashbacks to the lake where the missing girl was last spotted have been drained of color. Black levels are appropriately inky and offer solid separation, which is especially important for a few key sequences toward the end.

The DTS-HD Master Audio 5.1 track is largely in step with the movie’s small town setting. That means there’s not a lot of ambient or background noises coming out of the rear speakers. This is absolutely a dialogue-driven track, with the front speakers doing the brunt of the work. The subs only chime in very briefly during a few intense flashback moments. Otherwise, this is a decent, well-balanced track doesn’t offer much in the way of sonic bells and whistles.

Director’s Commentary: Director Simon Kaijser opens by revealing the film was shot in a tidy 20 days. He goes on to speak eloquently about the movie’s themes and motifs (the conditional nature of guilt; the significance of the mouse), working with time and budgetary restraints, and some of the ways the film evolved along the way. (The flashforward scene that opens the film was a late addition.) This track contains spoilers, so be sure to watch the film first; Kaijser provides some useful clarity for the movie’s ambiguous ending.

Inside Spinning Man: (12:12) Pretty standard behind-the-scenes featurette where everyone says very nice things about one another. Cast and crew (Kaijser, Pearce, Brosnan, Driver) along with author George Harrar break down Spinning Man‘s plot, including Harrar’s real-life inspiration for the novel. Kaijser also enthusiastically talks about wanting to make a modern noir.

Deleted Scenes: (4:23) There are five scenes total, the most notable of which shows us the discovery of a dead body. (We only hear about it in the theatrical cut.) There are also a couple of extra moments with Birch behaving like a doting dad. Features a Play All option.

I like Guy Pearce as much as way more than the next guy, but even I can’t really recommend you give this one a look.

Presumably, the movie wants you to ask questions like, “Is Birch really the killer…and would he even remember if he was?” Unfortunately, the story is so plodding and punch-less that the most prominent question quickly becomes, “Who cares?!”