Posted in: Disc Reviews by Archive Authors on May 8th, 2002

WOW! This is one of the most unique and fascinating films ever made… and this DVD release is equally as amazing. If you have never been introduced to Memento, this is your chance. This film works like no other (not counting “The Following” – Christopher Nolan’s first film), running backwards rather then sequentially. And let me tell you, once you have found the Easter egg that contains the film played sequentially, this film will take on a whole new life.

“In MEMENTO, Guy Pearce (“L.A. Confidential”)…plays Leonard Shelby, a man who finds himself without any recollection of recent events – except the knowledge that his wife has been murdered. Using instant photos and a body filled with tattooed reminders, he pursues the man he believes responsible for his wife’s death. Or does he?” – CTHE

Perfection through simplicity. This film is very dialog driven, so the center channel is very valuable; thankfully, the voices are very clear and focused. The surround channels are not overpowering, but they are used explosively during some of the flashback sequences. The soundstage is full and active, and the front channels are all used very effectively.

The video quality on this DVD is MINT! The 2.35:1 anamorphic widescreen transfer is pristine, and the colors and darks are all portrayed naturally. There is virtually no damage to the print, limited edge enhancements, and a beautiful overall visual feel. Again…. beautiful.

I have never seen a DVD like this. The menus will blow your mind with originality, and will keep you occupied (and possible frustrated) for hours. The menus work as a series of tests – from multiple choice to memory – all of which lead you through both the DVD set-up, and the special features. Once you can find the special features… there is where the real treat begins.

My goal, as should be your, was to find the special feature that allows you to watch the entire film in the correct sequential order. Once I found this Easter egg (which is very cleverly hidden), I was blown away with this feature. This film should definitely be watched in its original genius if you are a first time viewer, but for those Memento repeat viewers out there, you will really appreciate watching this film sequentially. And no, I won’t spoil the egg hunt for you… but if you get stumped, feel free to Click Here!

Found on the first disc is the scene specific audio commentary by director Christopher Nolan. This track was not as mind-blowing as I expected, but it is still a very high quality commentary. Nolan takes a very technical direction for this track, outlining how certain scenes were films, and who the film fits together. If you love this film, you will really enjoy learning more about it thorough this commentary.

On disc two, other then the notorious hidden sequential cut of the film, there are many special features included… some you will find, some you wont, some you think you have found and then realize that they are not even there. That is the joy of this disc. Some of the features that I was able to stumble across are: Production Stills & Sketches, Director’s Shooting Script, Sundance film festival’s documentary entitled “Anatomy of a Scene”, original short story by Jonathan Nolan, theatrical trailers, and I am sure many more that I did not find. You really need to sort through all of these features… they are all very worth while.

Don’t walk, Don’t jog, RUN to get your copy of MEMENTO LIMITED EDITION. This is one of the best, most unique films and DVD’s of all time. The quality of this DVD is amazing, and the special features will keep you busy for days, weeks, maybe months. Trust me… you need to own this DVD. 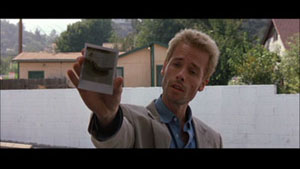 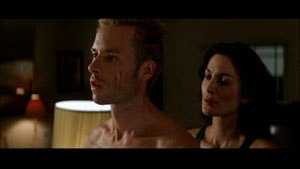