Posted in: Disc Reviews by Brent Lorentson on June 28th, 2018 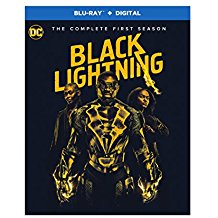 When we first meet the Pierce family it is at the Freeland jail, where Jefferson Pierce (Cress Williams) is there to bail out his oldest daughter, Anissa (Nafessa Williams).  The show doesn’t waste time in tackling social issues as we see them have an encounter with the Freeland police force as they are pulled over for a traffic stop.  The reason for the stop turns out to be they are looking for a suspect who just robbed a liquor store, and because Jefferson is black, he of course is a potential suspect.  Having this scene early on, not just in the season but in the pilot episode, is a bold and important move by the writers.  This shows us that despite being a superhero show, Black Lightning is going to show us a superhero tale unlike anything we’ve seen before on the CW.

Family takes the center stage in this show, and while there is some superhero crimefighting that does get done over the course of the season, watching the Pierce family tackle social issues is just as important.  Jefferson Pierce is a high school principal in a neighborhood that is surrounded by gang violence and drugs.  It’s been nine years since he was fighting crime as the costumed hero Black Lightning. He’s had his costume stashed away in order to raise his family and help the kids at his school, which has made him a valuable figure in the community.  He even mentions early on how he’s saved more kids by being a mentor at his school than he ever did as the masked vigilante.  Seeing Pierce confronting gang members and helping his students is an engaging story already, though it’s something audiences have already seen before (Dangerous Minds, Lean on Me, etc).

Jefferson is attempting to patch things up with his ex-wife, Lynn (Christine Adams) while they are doing their best to raise their daughters Anissa and Jennifer (China Anne McClain).  It’s when Jefferson’s daughters are taken by members of the 100 gang that Jefferson sees no other choice but to dust off his old costume to save his daughters.  Can I just take a minute to say how much I hate the Black Lightning costume?  I don’t care that the suit is bulletproof or all the nifty little thinks he can do when he’s wearing it, but the actual look of it with the plastic looking neon lightning bolts just looks so cheap. Get this man a good-looking suit. With Black Lightning making his bold return, we know that this isn’t simply a onetime deal, and when the criminals of Freeland see who comes out of retirement, well, things definitely get more interesting.

While the season plays out we discover there is a new drug in town, Green Light, that gives its users some superhero powers as a side effect.  We also get a bit of a rift that occurs in the criminal underworld as we meet thugs and gang leaders like Lala and Lady Eve.  But if there was one member of the rogues’ gallery that seems to be the most dangerous threat, it is Tobias Whale (Marvin Jones III aka Krondon).  Tobias is an albino character who has his own unique skill set, and to a point he’s somewhat a sympathetic villain when he’s not killing people.  What this show has going for it is how grounded these villains are in reality (once you look past their abilities). For instance there is a character that eventually becomes the villain Pain Killer, and his journey is definitely one we can understand, though perhaps not necessarily agree with.

On the technical side of things to help Black Lightning fight crime there is Uncle Gambi (James Remar).  He’s a former government agent who helps develop the super suits but also works from home base to keep an eye on Black Lightning when he’s out in the field. Another one of the show’s strengths is the relationship we see between Pierce and Gambi. We see them go through plenty of ups and downs, but they have a good chemistry together.  As for what they do with Gambi as we see he’s not so much the good guy he may appear to be, it’s fun getting to see where they take this character and how it impacts Pierce and the family.

Where the show seems to have some of its issues is how the characters seem to flip-flop their feelings around once it is discovered Anissa has powers and as she eventually becomes the crimefighter Thunder.  While Black Lightning preaches over and over how violence is not the answer, we are constantly seeing him and Thunder taking to the streets and causing all sorts of havoc.  Don’t get me wrong, I have no problem with the violence, but when you have a character whose moral strength in the community has been to always find a way that isn’t through violence or illegal activity, if things don’t go his way he easily puts on the costume and will take to the streets with intent to kill.  At least when the villains flip-flop on their intent to kill, it can be easily justified by saying that’s what makes them the bad guy.  The show also seems to suffer from why do bad things always seem to happen to the Pierce family, and why is it so hard to believe Pierce is Black Lightning?  Thankfully the show redeems itself in the back half of the season, but I still can’t ignore the Clark Kent effect, how basically trained detectives can’t tell that Pierce and Black Lightning are the same person only because one is not in costume.

Another issue is how the show seems to be obsessed with slo-mo shots; for instance every time we see Tobias enter a room or get out of a car, it’s as though we are watching some generic rap video. A show like The Flash can get away with it since its character is moving so fast you need to slow it down to see what he’s doing, but in this show it’s simply trying to be cool.  This is where I defer to Luke Cage.  The shows are very similar, though Black Lightning thankfully understands its strength is dealing with the family dynamic, whereas Luke Cage handles the crimefighting and social issues a bit better.

One bit that is a little frustrating at the start is we don’t get much of a back story as to how Jefferson became Black Lightning.  We do eventually get glimpses to his origin story, but frankly it’s something I wish we got to see from the start.  What the show is sort of doing is using the family and them discovering who they are as a way of dealing with the origin story and Jefferson simply putting in his occasional input from his past.  Hopefully as the series progresses we will get to see more of young Jefferson, because I’d like to see a young Black Lightning shine and fix a broken Freeland and then see him come to decision and hang up the suit.

Black Lightning Season 1 is presented in the aspect ratio 1.78:1.  The 1080p image is arrived at with an AVC MPEG-4 codec at an average of 12-22 mbps.  A good portion of the series is shot at night, and to capture the action the show is a bit over-lit at times to help deliver a slick look. The interiors and daytime shots look fine and natural, but my issue mostly comes from the style that this is shot. There is a lot of use of slo-mo when certain bad guys make an entrance, and the show looks like a poorly-produced music video at these points.  There is a lot of CGI needed over the course of the show mostly involving Black Lightning and Thunder’s powers. The blending is done well, especially for a television series; hopefully as the show progresses and effects evolve these effects will look more natural.  There are times where a yellow filter seems to be used. While I like that the show is attempting to give us different looks, it needs to have a little grit and grain to really pull this off.  When the show has flashbacks that go to black and white, this is honestly when the show looks its best, and I wouldn’t mind seeing how an entire episode would look, though I’m worried some of the separation of black could be lost.

The DTS-HD MA 5.1 track is impressive for a television show.  While of course we need to have clear dialog, the use of the side and rear speakers comes into play heavily when the fight scenes come up and we get the impacts of hits and gunfire.  At times when some of the music kicks in it is a bit much, as the show has everything from a score to classic soul and funk hits to modern hip-hop.  While the sound design may not be a finely layered as a feature film, for a television show this is well done.

Art Imitating Life; The Pilot Episode (5:02) The show’s co-creator discusses his real life experiences and how they were incorporated not just in the pilot but in the series.

A Family of Strength (7:09) A discussion about how it’s the connection the Pierce family has with each other that is their real strength and how they are there for each other as they deal with their problems on the streets and at home.

Black Lightning: 2017 Comic-Con Panel (17:25) Here we get to see as the cast was revealed for the first time to the audiences at Comic-Con, and they discuss the show as it gets ready to go into production.

Deleted Scenes (32:38) A collection of scenes from over the course of the season that ended up on the cutting room floor.  Nothing great here but does offer a little bit more of the show and character development.

2 Come Visit Georgia PSA’s: Mostly this is footage of the producers and crew members of the show discussing their experience with filming in Atlanta and the surrounding areas.  This is more a video to bring in other filmmakers to shoot in Georgia than a tourism boost.

Despite having Luke Cage on Netflix, seeing Black Lightning on basic network television is a big deal, and it is a welcome sight.  It doesn’t seem as though we will be getting to see any other established DC/CW characters cross over, but who knows what can happen down the road.  While the show does dip into some generic story tropes, it is nice to see Black Lightning attempting to bring us something new.  First seasons are usually shaky with this kind of material, and I’m expecting this show to only improve, and it’s why I’m curious to see what is in store for us in Season Two.

Brent Lorentson is a horror writer and film critic based out of Tampa, Florida. With a BA in Digital Film, he co-wrote and co-directed Scavenger Hunt. His short stories have appeared in various horror anthologies. In 2019 his short script Fertile Blood will be a part of the anthology horror film Slumber Party. He is currently working on his first novel A Dark and Secret Place set to be released in late 2019. Favorite Films: Taxi Driver, Fight Club, I Saw the Devil, The Wild Bunch, Dawn of the Dead, A Clockwork Orange, Pulp Fiction, Heathers, The Monster Squad, and High Fidelity.
Forrest Gump (UHD Blu-ray) (4K) Spinning Man (Blu-ray)