Posted in: Disc Reviews by Brent Lorentson on July 3rd, 2018 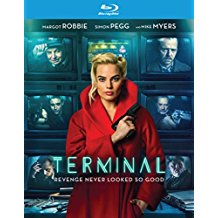 Sometimes a movie comes along that has everything going for it: a great cast, a great cinematographer, and a decent plot, but when you watch it, you just scratch your head wondering why it ended up so bad.  That in a nutshell is Terminal.  It stars Margot Robbie, Simon Pegg, and Mike Myers, and for each of them I believe this is a film they quickly want to move past. The tagline for the film is Revenge Never Looked So Good, which is a big part of the problem with the film. I absolutely love the look of the film. It’s beautiful and to a point creates its own style I’d call neon-noir, but unfortunately no matter how good something may look, it doesn’t always mean it will be good.

A good portion of the film is about Bill (Pegg), a teacher who is waiting for a subway train but is told by the night janitor, Mr. Franklyn (Myers) that one won’t be coming for hours.  Mr. Franklyn eventually recommends a diner (conveniently called The End of the Line) for Bill to wait.  It’s at the diner where Bill meets the quirky Annie (Robbie), who is his waitress but is also intrigued by his illness.  To add some more padding to the film, we have a pair of hit men who are introduced in the film’s wonky timeline who take a mysterious job that leaves them locked up in an apartment for days as they are waiting for a phone call to signal when the hit is to go down.  How Annie involves herself into the mess with the hit men strays into spoiler territory, but I’ll simply say it was a designed coincidence from sloppy storytelling.

This film so desperately wants to be Sin City, but its writer and director don’t seem to have a grip on his characters or his story.  Vaughn Stein is the man responsible for this stylish mess that wants to be mysterious, but the problem is Stein doesn’t seem to understand what he’s doing.  The film bounces from an assassin trying to get a job done, to a waitress with a vendetta, to a dying schoolteacher, throw in some random Alice in Wonderland references, hit men  that are a pair of squabbling idiots, and sprinkle in some dialog that is sleep-inducing and at times goes in circles just to stretch the scene.

Another problem is, where is everyone?   There are characters who cross paths, but this is only to bridge one story to the next. There are simply no other characters to flesh out this world to make it feel real.  The most we get are a pair of would-be thieves and some scantily clad dancers, but even this scene is gratuitous in the grand scheme of things.  The cast does their best with what they have, and at times the performances could almost convince you the film is not as bad as it may seem, but don’t worry; there is always some ridiculous moment to remind you what you are watching.

The film’s saving grace is its cinematographer, Christopher Ross.  The overall look of the film from how some of these sets are lit and shot are surprisingly stunning considering how low-key it is.  The atmosphere he manages to create between the diner, the subway and the apartment each has a unique look, but yet they all feel as though they belong in a cohesive piece. One of the best-looking shots/sequences is at an abandoned silo to which Annie takes Bill.  The mix between the neon lighting with smoke for lighting the set and the characters elevates this film well beyond its budget, and it’s a beautiful striking image.

But if people simply want to look at beautiful images, I’d recommend an art gallery, and if you are hoping for a slick neo-noir revenge flick, well, you’ve arrived at the wrong film.

Terminal is presented in the aspect ratio 1.78:1.  The 1080p image is arrived at with an AVC MPEG-4 codec at an average of 12-26 mbps.  As I mentioned above, this is a good-looking movie, and to some degree this is one of the better-looking films I’ve seen all year.  Everything from the shadow and light play of the sets to how the characters look in their close-ups is remarkable.  As the film bounces from built sets to real locations, it’s the overall look that makes this a cohesive narrative.  I’m borderline curious if my thoughts on the film would improve if I watched it on mute.  The blacks on this film are deep at times, and there is a beautiful contrast at times when other colors enter the film’s palette.

The DTS-HD MA 5.1 track is well done. The dialog is clear, so we can hear each and every line of dialog and its ridiculousness.  There is a haunting whistle that one of the characters performs that does manage to get under your skin at times, and this I felt was impressive.  But what’s missing is the ambience, the background chatter to allow us to feel we are in another world and  not watching a staged play.

The Cast of Terminal (6:14) The cast discusses what brought them to the project and their characters in the film.

Building the World of Terminal (6:14) This is about the overall visual look of the film. Wish we got to see more of what the cinematographer did with this film.

From Concept to Creation (2:05) A very brief look as we get a side-by-side look from the storyboards to the final product of various shots.

This is one of those films that I feel deserves a reboot, only this time put the screenplay in the hands of someone who appreciates the noir genre.  I really disliked this film, and it’s a bummer, because I love this genre, and I really enjoy the cast.  Sure, there will be people who look at this and go, “It can’t be that bad,” but for me, this would be my pick for the raspberry award of the year.  Sure, there are worse movies, but they don’t have the talent and budget that this film had.  Someone at some point should have come in and said this script needs a rewrite. Heck, two of the film’s stars are screenwriters and could easily have helped guide this project.  Thankfully the film’s cinematographer seems to be on the path to bigger and better projects, since he’s signed on for the next Danny Boyle film and Boyle is signed up to do the next Bond film, so I’m curious to see how things turn out for Mr. Ross in the next few years.

Brent Lorentson is a horror writer and film critic based out of Tampa, Florida. With a BA in Digital Film, he co-wrote and co-directed Scavenger Hunt. His short stories have appeared in various horror anthologies. In 2019 his short script Fertile Blood will be a part of the anthology horror film Slumber Party. He is currently working on his first novel A Dark and Secret Place set to be released in late 2019. Favorite Films: Taxi Driver, Fight Club, I Saw the Devil, The Wild Bunch, Dawn of the Dead, A Clockwork Orange, Pulp Fiction, Heathers, The Monster Squad, and High Fidelity.
Spinning Man (Blu-ray) Mission: Impossible (UHD Blu-ray) (4K)