Posted in: Disc Reviews by Gino Sassani on September 6th, 2018 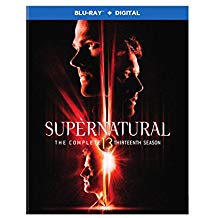 “We’ve got a whole new game of tiddlywinks.”

It’s the unlucky 13th season of Supernatural, and it might be the most loaded season ever. We have a basket full of bad guys and gals, and the Winchester Brothers have got their work cut out for them, as if last season wasn’t busy enough. The Winchesters found and then lost their Mom. Crowley has finally bit the dust, and he will be greatly missed at least by this fan. Lucifer’s son has finally been born, and there are going to be a lot of bad folks wanting to get their hands on that little guy. Of course, he isn’t such a little guy any more. He’s now the appearance of an older teenager, and he has some mad wicked power. The question is whether Sam and Dean can influence that power for good. Or will he go the way of his Pops and be the poster child for evil? Now if all of this is Greek to you, then you’re in the wrong place. You have 12 years of lore to catch up on before you should even consider picking up Supernatural Season 13 from Warner. Check out our long list of reviews here and start binge-watching fast. Once you’re caught up continue on.

“Two salty hunters, one half-angel kid, and a dude who just came back from the dead…again. Team Free Will 2.0. Here we go.”

Alexander Culvert joins the main cast this season as Jack, the son of Lucifer. He’s going to drive a bit of an unintentional wedge between the brothers, but it’s one you’ll see coming from a mile away. Sam thinks that there is kid in Jack and that it’s up to them to show him how to be a good guy. They take him out on some of their hunts, and his power sure comes in handy. Of course, Dean only sees the monster that he would become and is quite willing to put him down like he does all monsters. It’s no spoiler to tell you that the kid will grow on Dean, and the tug-of-war between breaking bad or good is a wonderful experiment in nature vs. nurture, something this show has been playing out for 13 years.

Meanwhile, Apocalypse World is the name given to the reality on the other side of the rift that was opened in the previous year’s season finale. Mary and Lucifer get trapped there and become captives of that world’s Arch-Angel, Michael (Keyes). This Michael is tired of the barren world that has already been destroyed by an angel war that has left few humans alive and a dystopian place where monsters are even worse because there isn’t much food remaining. Michael wants to use Lucifer to open the rift again so he can conquer our Earth. Lucifer manages to escape back into our world, where he searches for Jack, who ends up caught in Apocalypse World where he leads a resistance with Mary for a good chunk of the season.

Apocalypse World is a chance to for many fan-favorite characters to return. But these aren’t really the same people we might remember and love. It’s always great to see Jim Beaver return as Bobby. Ostrich Chua returns as Kevin. We get Felicia Day as a kick-ass version of Charlie. Richard Speight gets to return both in front of the camera as both Loki and Gabriel. Also returning to direct and cameo is Stargate’s Sam Amanda Tapping. Ruth Connell is a favorite, and we will get to see plenty of the thought-dead Rowena. It turns out she takes precautions in case she dies, and we learn that there is only one person who can kill her. Let’s just say she’ll return to being a reluctant helping hand, but not quite trustful. Rowena is always looking out for her own interest. Unfortunately she does not mean a return for Crowley. David Hayden-Jones shows up as a Ketch, the last remaining survivor of the English Men of Letters. Kim Rhodes will be around as Sheriff Jody Mills, and this season we’ll get a backdoor pilot that was intended to feature Jody and her girls. The show was going to be called The Wayward Sisters, but like the previous attempt at a spinoff, it was never picked up. We get to see a little bit of what that would have been like here.

There are several bad folks looking for Jack. One of those is the guy who took over as King of Hell after Crowley died. He knows Lucifer is missing, so he’s been powering up and putting a lot of the season’s hurt on. He’s Asmodeus, and he’s played Jeffrey Vincent Parise. He’s a little bit like an evil Colonel Sanders. He dresses in the white suit and has that kind of over-the-top southern accent. It’s all intentional, as KFC and Sanders jokes abound during the season. He’s an interesting character who certainly carries his evil well, but he doesn’t have that multi-dimensional aspect that Mark Shepherd brought to Crowley.

The best news of the season is that Castiel isn’t going to stay dead, and that’s something that was already revealed during the summer break. Misha Collins has brought so much heart since he’s been a part of Supernatural. It’s his job to keep the brothers focused on the good in things, and his eternal optimism is somewhat contagious. It would be a huge loss if he does exit the show, just as it was for Crowley. In fact, this season Castiel spends some quality time with Lucifer, and Collins and Mark Pellegrino share some outstanding chemistry. It’s short-lived, but I suspect the writers and staff might have caught on to what they had, and I hope that we get to see much more of it in the future.

Lucifer is even taking a run at running heaven. Since the fall several episodes ago, there are few angels alive anymore. They are Heaven’s power source, and the lights are about to go out. We don’t solve this problem in Season 13, but I suspect it will hang over the 14th. The big plot of the season is to rescue Mary and Jack from Apocalypse World and keep Michael from invading ours. Many episodes have a kind of split story. We’re following the normal events on our side while also following the resistance in the Apocalypse World. Obviously, both are leading to a confrontation that shakes up the landscape in the final few episodes.

Of course, there are still some standalone stories that do make a big contribution to the show’s run. In one episode they go to Tombstone to track down a resurrected old gunslinger, and you can imagine the party that’s going to be for Dean.

But the best episode of the season is the anticipated crossover with Scooby Doo. It starts with the boys wrestling a cursed giant stuffed dinosaur and leads to a cursed television that zaps Sam, Dean and Castiel into an episode of Scooby Doo. The animation is spot-on and drawn by people who do actually animate that show. All of the current Scooby Doo voices are here, so that we get a real Scooby Doo episode built in. That includes Frank Welker, who has been voicing Fred since the 1960’s show origins and who has been voicing Scooby since the 90’s. The episode was actually a real 1969 episode of the show which goes off the rails. Dean’s hitting on Daphne, while Thelma thinks Sam’s cute. This is the kind of playful episode that is also true to both shows. It will likely go down in history as a milestone episode in television history. It’s worth picking up the set just for this.

Each episode of Supernatural is presented in a 1.78:1 aspect ratio. The 1080p image is brought to you through a AVC/MPEG-4 codec. As you might expect, this show is dark in more than just its nature. Much of the action occurs at night, so black levels need to be spot-on, or any detail can be quickly washed away like blood pools in a hurricane. Supernatural delivers with great shadow definition and deep levels of black. I’ve seen the broadcast HD versions, and these are even better. What is remarkable about the colors is that they manage to hold on to such fine definition even under intense low-light filming conditions. This season we get some nice contrast in Apocalypse World. Things there are pretty much monochromatic with just hints of desaturated colors. Light is always dark, and sunlight is defused through layers of dust. It’s a dead world with a wonderfully stylish look.

The Winchester Mythology – Nature vs Nurture: (19:33) This feature looks at Jack and how both his nature and the influence of the brothers impacts his development.

Into The Apocalypse – A World Without Winchesters: (9:48) The big think about the alternate world is there was never a Sam or Dean to stop all of these bad events like they did in our world. This feature looks at that world in some detail.

Mystery Mash-Up – The Making Of Scoobynatural: (22:12) This feature goes behind the scenes for this iconic crossover. We get to see animation designs and plenty of time with the actors in the recording studio to do the voices. Best feature of the set.

Kansas – Carry On Wayward Son: (6:23) We get to see the band make a surprise appearance before the show’s panel. There’s plenty of cast and crew reaction to the event. Unfortunately, Steve Walsh has retired, so we don’t get the guy who originally sang the song which has a huge connection to the series.

I liked Season 13 a lot. There is less of a single threat, which can get exhausting on this show. But you’ll find a nice mix of standalone episodes with several bads that have a place in the year’s mythology arc. After 13 years this series has a remarkable bit of life left, and this year was a chance through an alternate reality to revisit the rich collection of stories and characters that have been a part of these 13 years. I think I’ll be spending a lot of time over the years reviewing this show. “When something’s important you make the time.”

Gino Sassani is a member of the Southeastern Film Critic's Association (SEFCA). He is a film and television critic based in Tampa, Florida. He's also the Senior Editor here at Upcomingdiscs. Gino started reviewing films in the early 1990's as a segment of his local television show Focus. He's an award-winning recording artist for Omega Records. Gino is currently working on his 8th album Merchants & Mercenaries. Gino took over Upcomingdiscs Dec 1, 2008. He works out of a home theater he calls The Reel World. Favorite films: The Godfather, The Godfather Part II, The Body Snatcher (Val Lewton film with Karloff and Lugosi, not the pod people film), Unforgiven, Gladiator, The Lion King, Jaws, Son Of Frankenstein, The Good, The Bad And The Ugly, and Monsters, Inc.
Higher Power (Blu-ray) Tag (Blu-ray)