Posted in: Disc Reviews by Brent Lorentson on September 6th, 2018 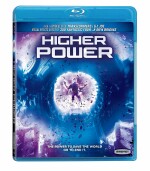 There is something about the notion of movie magic that I believe can grab hold of an audience member and pull them from their living room seat and into the story they are watching.  This movie magic seems to occur more often these days, as special effects seem to take leaps and bounds every year as new technology is created to dazzle us all.  Here’s the thing, though, sure, it’s great how we can now see lifelike 50-story monsters destroying cities, or how underwater worlds can exist, but none of it matters if the story or the characters are not relatable.  If the story isn’t there, then your big effects are nothing more than overpriced cartoons that will be forgotten by the time the audience has exited the theater.  When it comes to Higher Power, the best way to describe it is to use the overused expression, “all style and no substance.”

Co-writer and director, Matthew Charles Santoro comes from a special effects background, and you can tell he’s leaning heavily on his strengths with this film, and the result is a film that plays out more like a demo reel than an actual movie.  Sure, there is a cast of characters to move the story forward, but the problem is none of it makes any sense.

Joe (Ron Eldard) is the victim of a crazed experiment, where he is chosen by a crazy scientist, played by Colm Feore, who plans to turn Joe from a struggling alcoholic trying to keep his family together into a shadow-government-created God.  The notion is somewhat clever; only the execution is tiresome and, well, boring.  There are attempts to create some depth as we see Joe attempting to patch things up with his family, but these moments offer up little in the way of character development. Instead it just feels like padding before we are hit with more special effects.  The storyline simply doesn’t seem to hold up, as we’re given information in fragments and when it seems to fit whatever is happening on screen.  We see Joe as a dad when his kids are little; then suddenly one is a drug addict, and the other is working her way to be a successful college student.  We don’t get to see a decline in the family’s relationship or anything that could help us as an audience build sympathy for these characters other than being told Joe’s wife died.

Then there is the issue with why Joe is picked to be the victim of this experiment; after all these people want to give this guy these God-like abilities, only they seem to choose him at random, though they believe his instability will help further his powers.  Oh, the logic in this gets better when he does get powers. They don’t try to restrain him or help him slowly adjust. Nope, they figure setting him lose on the city to wreak havoc is a good idea.  Then there is my favorite bit where he’s capable of blowing holes through walls and destroying floors of buildings yet for some reason feels the need to carry a gun around.

Sure, the effects are cool, and it’s impressive considering the film was made for less than 1 million, but there is nothing about this film that sticks with the viewer.  Had this been a film that focused more on how Big Brother can monitor us at all times, or simply been a film that focused more on its lead dissolving into his grief and becoming this “higher power”, there could have been a chance to salvage this film.

Higher Power is presented in the aspect ratio 2.39:1.  The 1080p image is arrived at with an AVC MPEG-4 codec at an average of 22 mbps.  When it comes to the visual effects in the film, there really is some beautiful imagery that fills the scree, and it is impressive how many of the effects were created on such a limited budget.  When the image isn’t filled with numerous CGI effects and a variety of filters, we get rather a bland image that is lacking in depth and a stimulating color palette.

The Dolby Atmos 7.1 track is a bit of an odd mix with this film.  You’d imagine a film that is filled with so many additions to its visual style in post that the same dedication would be put to the sound mix, but that’s not the case.  There is a lot of bass that is used, especially in the latter half of the film during many of the destruction scenes, but nothing that I would consider making this an immersive experience.  There are times when the surround is used as a disorienting effect when Joe is hearing the Mad Scientist in his head, but other than that this mix falls flat.

The worst part about this film is knowing it could have been something pretty cool if more time was spent on the plot and characters.  Santoro has proven he can create some cool-looking visuals on a meager budget. If only he had more experience behind the camera, this could have been a different experience.  The bright side to all this is Santoro could possibly become one of the up-and-coming filmmakers to keep an eye on once he has a little more experience behind him.  Let’s not forget that once upon a time James Cameron directed a certain sequel that was pretty bad before coming out with The Terminator.  Perhaps in a few years Santoro can follow in those footsteps.

Brent Lorentson is a horror writer and film critic based out of Tampa, Florida. With a BA in Digital Film, he co-wrote and co-directed Scavenger Hunt. His short stories have appeared in various horror anthologies. In 2019 his short script Fertile Blood will be a part of the anthology horror film Slumber Party. He is currently working on his first novel A Dark and Secret Place set to be released in late 2019. Favorite Films: Taxi Driver, Fight Club, I Saw the Devil, The Wild Bunch, Dawn of the Dead, A Clockwork Orange, Pulp Fiction, Heathers, The Monster Squad, and High Fidelity.
Tuesday Round Up: September 4, 2018 Supernatural: The Complete Thirteenth Season (Blu-ray)