Posted in: Disc Reviews by Gino Sassani on September 28th, 2018 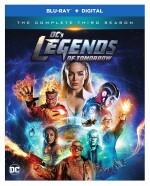 “How will we be remembered? Will it be for saving the world…Twice? Nope. We’re the team who broke time. That’s right. History has been torn to shreds, which means it’s up to us to put it back together again, piece by piece, finding these so-called anachronisms before we get torn to shreds. So please, don’t call us heroes. We’re legends.”

At the end of the second season the team broke one of the cardinal rules of time travel. You can’t revisit a time and place that you already visited. The result is that you break time, and that’s exactly what the Legends of Tomorrow have done. The result is that they have been recalled and dismissed from service by the newly-formed Bureau of Time. Now our legends are back in the mundane world, where Sara (Lotz) is working as a clerk at a bed and shower store, having fantasies of killing her boss. Ray Palmer (Routh) went from owning the world’s largest tech company to working for a kid at a dating app… eh, make that a holistic social networking program. Professor Stein (Garber) is enjoying his new family with a grandchild on the way. Jackson (Drameh) is just bored to death with a normal life. And Mick (Purcell) is chilling on a beach in Aruba when his chill is interrupted by Caesar (Merrells). That’s Julius, and not the salad, hotel, or talking ape. Of course, he’s an anachronism who happened to arrive in Aruba for the annual Aruba-con celebration. It looks like the team is going to have to get together, but the powers that be don’t quite see it that way. So they steal back the Waverunner, which was retired to a training simulator, and it’s off fighting the problem that they created.

Rip (Darvill) is back as the guy who created the new organization, and he’s fighting the directors, who aren’t as forgiving about the Legends. Their biggest threat there is Director Ava Sharp (Macallan), who ends up becoming somewhat of a love interest for Sara down the road. The season ends up being a series of uneasy alliances with the new organization to fix time. While the anachronisms might be a problem for the good guys, the event leads to the return of Damien Darhk, once again played by Neal McDonough. He’s been raised from the dead by a cult and is taking advantage of the anachronisms themselves to empower his daughter Nora (Ford), who has been invaded by a demon thanks to daddy dearest. His focus is a collection of talismans that are scattered over time. Vixen (Sellers) rejoins the cast from 1942, because her powers are derived from one of the talismans. They represent various natural elements like fire, water, and spiritualism. Before the season is over, you’ll see these artifacts pass from good guy to bad guy to good guy several times. It’s like watching a science fiction version of tennis.

The journey will also put the Legends in the company of a few historical figures who include a younger version of Stein. We meet P.T. Barnum. Turns out Elvis might be kept away from his historic demo recording by a haunted guitar. We also meet Helen of Troy (Paly), who starts a studio war between Warner Brothers and a rival who kidnaps the stunning actress. We meet a young Palmer when the team discovers he was suddenly killed as a child. This episode is a complete E.T. homage. Young Palmer has befriended a cute little alien who is really a young dominator, so the team must get it back to its mom. The episode title is Phone Home and includes some shots taken directly from the Spielberg film, from the bikes flying with a full moon to the alien in a closet blending in with the toys. It’s one of the lighter episodes of the season. Ghostbusters is also given a big homage in the season. The team discovers that a Viking raiding party is worshiping a toy called Bebo. He’s part Tickle Me Elmo and part Teddy Ruxpin. He shows up in the finale as a giant version that tackles the season’s real big bad Mallus. It might have worked for the big marshmallow man in Ghostbusters, but I have to say this final showdown is just too silly to pay off 17 episodes of story that came before it. I found it to be cute, sure. But as a season finale, it was a huge letdown.

John Noble provides one of the more clever guest spots I’ve ever seen. It turns out that Mallus while a CG character has a voice that sounds mysteriously like the actor John Noble. Of course, that’s because Noble is providing the voice, naturally. But the Legends also recognize the voice and decide to trick one of his minions by delivering false orders. That happens by going back in time to New Zealand in 1999 where John Noble is filming The Lord of the Rings. They approach him with “rewrites” that are really the false commands that they record and play back in the ear of their target. That’s the highpoint of the season before it goes south in a hurry with a big stuffed Bebo fighting the demon Mallus.

There are going to be cast changes as a result of this season. Both Franz Drameh and Victor Garbor are leaving the show. John Constantine reprised by Matt Ryan appears for a few episodes this season but will be taking a regular role for the upcoming season. You might recall that Constantine had his own NBC show for half a season, and it was cancelled. He has since shown up on these shows and will now be a regular going forward. That should make for an interesting mix of characters in Season 4.

Each episode is presented in its original broadcast aspect ratio of 1.78:1. The 1080p image is arrived at with an AVC MPEG-4 codec. This high-definition image presentation suffers from Warner’s decision to put 16 episodes plus features on just two discs. There’s a lot of nice production design that suffers from compression artifact and shimmer. There’s no place for that on a Blu-ray release. It’s twice the number of episodes that should be here, and I strongly urge Warner Brothers to reconsider this cheap alternative to doing it right.

The Time Calibrators – League Assemble: (17:12) Executive producer Phil Klemmer talks about some of the big moments in the season.

Post Production Theater: (6:12) A collection of amusing placeholders in various scenes that stand in for finished f/x in the working cut of each episode.

The Best Of DCTV Comic-Con Panels At San Diego 2017: (58:27) Instead of the usual panels on each release this is a compilation of all four in one feature. Again I suspect it will be included with the other sets.

Inside The Crossover – Crisis On Earth X: (42:00) This is likely going to be repeated on all four sets. It’s a nice discussion with a member from each show’s production team. We get a ton of insight into how the shows cooperate and the choices that are made for what show does which segment. This is just guys talking, but it ends up providing so much insight into not only this episode but the process. I really enjoyed this more than most features.

Of course, there is another traditional crossover even across the four shows. I have to offer HUGE kudos to Warner Brothers this year. Every year I have complained that you only got that show’s episode on each set. The problem with that was they didn’t necessarily release the sets in crossover order, and you had to buy all four titles to have the entire story. This year Warner listened to the fans. You get the ENTIRE crossover event, and in the proper order. I can’t emphasize enough how big of a give this is to the fans who can save money not having to buy the sets they might not want or be able to afford. It’s also the best way to see the event. Whoever made that decision at Warner deserves a big raise and the thanks of the fans of these shows. Good job! “Sometimes we screw things up for the better.”

Gino Sassani is a member of the Southeastern Film Critic's Association (SEFCA). He is a film and television critic based in Tampa, Florida. He's also the Senior Editor here at Upcomingdiscs. Gino started reviewing films in the early 1990's as a segment of his local television show Focus. He's an award-winning recording artist for Omega Records. Gino is currently working on his 8th album Merchants & Mercenaries. Gino took over Upcomingdiscs Dec 1, 2008. He works out of a home theater he calls The Reel World. Favorite films: The Godfather, The Godfather Part II, The Body Snatcher (Val Lewton film with Karloff and Lugosi, not the pod people film), Unforgiven, Gladiator, The Lion King, Jaws, Son Of Frankenstein, The Good, The Bad And The Ugly, and Monsters, Inc.
Occupation (Blu-ray) “31 Nights Of Terror” Upcomingdiscs Interview With Actor David Sakurai From Housewife