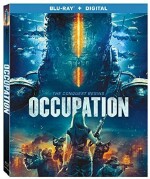 “Told you it was aliens.”

What if Michael Bay was Australian and he was only given $6 million to make an alien invasion movie? The result might look a lot like Occupation, a rollicking, gleefully dumb sci-fi/action flick that works best as a throwback to simpler (i.e. dumber) times at the multiplex. But while Occupaton has its charms, the movie’s shoddy special effects and production values consistently undermine the kickass story it’s trying to tell.

Occupation is set in a sleepy Australian country down where nothing much happens…except perhaps for the end of the world! The film’s first act introduces us to the characters who will become our group of rag-tag heroes. There’s down-on-his-luck former rugby football player Matty (Dan Ewing), who decides to return to the field for one game, much to the chagrin of his girlfriend Amelia (Stephanie Jacobsen). Jackson (Charlie Terrier) — the current star of the local football team — is also annoyed at Matty’s unexpected return but has bigger fish to fry…turns out his girlfriend Vanessa (Rhiannon Fish) is pregnant. Meanwhile, family man Peter Bartlett (Temuera Morrison) is on holiday with his family, which includes bored, rebellious teenage daughter Bella (Izzy Stevens), who starts flirting with town scoundrel Dennis (Zachary Garred).

The assorted characters gather for a big football game that is rudely interrupted by an alien invasion. The imposing extraterrestrials arrive by air and on the ground, causing Peter to be separated from his wife and son as the group seeks shelter in the nearby woods. The group also includes local farmer Arnold (Charles Mesure), who knows the area better than anyone. After overpowering a few invaders and securing a small cache of weapons, the group begins to fight back and eventually trains to become an elite, disruptive militia. As the human resistance continues to do some serious damage, they also discover the aliens’ reasosn for landing on this quiet corner of Earth. Without spoiling anything, it involves some sort of alien toxin and the enslavement of their human captors.

Honestly, it’s not totally clear…and it doesn’t even matter because this movie is really only interested in blowing s— up. Occupation has all the hallmarks of a big, dumb American action movie…except for Americans and the budget to create believable explosions. Yet instead of taking a “less is more” approach with his limited resources, writer/director Luke Sparke decides to double down on the spectacle.

Starting with the alien attack during the football game, Occupation gives us dozens of (unconvincing) explosions and a handful of largely incoherent set pieces that are nevertheless kinda fun because of the filmmaker’s unabashed enthusiasm. More than once, the director has his ensemble stand around in unnatural groupings simply because it looks cool. This is also the sort of movie that opens with an unseen narrator cribbing from Ronald Reagan’s famous address to the United Nations and isn’t shy about pumping rousing, heroic music into any scene.

I don’t want to completely crush Occupation for shooting for the stars, but I do wish the movie had embraced its small-town roots even more. Part of the charm of this independently-financed action flick is its small-town setting: instead of taking down a major city or national monument, the most prominent structure here is a bypass road being constructed. The most effective action sequence is an early encounter between the survivors and a pair of alien invaders: it works because it’s genuinely tense and barely relies on so-so CGI since the humans mostly take the aliens down by hand.

The characters are all familiar archetypes, but a few performers do pop. That includes Mesure as the overtly serious parental figure, and Terrier’s hot-headed Jackson. Ewing makes for an acceptably generic action hero, and it’s also nice to see many of the film’s female characters get a chance to kick butt (instead of merely being damsels in distress). Of course, the movie can’t resist staging a prolonged action sequence centered around Vanessa giving birth to her baby at the most inconvenient possible time.

This is the sort of movie that manages to feel both bloated and rushed. (It’s like several seasons of Falling Skies crammed into a single movie.) Occupation clocks in at two hours, which is way too long for such a lark. It doesn’t help that the Australian military shows up pretty late in the game to reveal the aliens’ intentions. It’s only annoying because the aliens’ intentions don’t really matter…all that matters is that our heroes keep kicking their butt while the Australian flag waves heroically in the background, which may or may not be a thing that actually happens in this film. (You’ll have to see for yourself.)

Occupation is presented in an aspect ratio of 2.40:1. The 1080p image is arrived at with an AVC MPEG-4 codec at an average of 20 mbps. Except for an intentionally overexposed outdoor scene early on, the image is disappointingly desaturated for much of its running time after the action moves into the forest. There are some occasional and satisfying pops of color whenever the aliens announce their arrival in the sky. But even those visual highlights are submarined by black levels that needed to be inkier. Instead, it’s almost impossible to see what is actually happening during the rainy, nighttime sequence when Vanessa goes into labor. With its murky, desaturated palette, the look of the film is a lot more lifeless than its rollicking tone would suggest.

The DTS-HD Master Audio 5.1 track isn’t quite as room-rattling as it could’ve been when you consider all the explosions. Yes, there is consistent bottom-end support during the many action sequences, but the subs don’t quite lower the boom as powerfully as I expected. Similarly, rear speaker activity is solid but not nearly as lively as it could’ve been given all the firefights and the many chances to have sound jump from one speaker to the next. On the positive side, the relatively muted explosions and gunfire means that the dialogue here is consistently clear and easy to understand. Still, it’s odd that this track is one of the few spots where the movie holds back.

The good news for Occupation fans is that there is sequel on the way with Ken Jeong on board, which makes me think it’ll have more of an emphasis on comedy. Here’s hoping the second film also comes with a heftier budget for more convincing action sequences. (To be fair, the practical/makeup effects for the aliens is pretty decent, if somewhat generic.)

Occupation isn’t exactly bad or hokey enough to be enjoyed on a SyFy “Sharknado”-level. But despite my issues with the movie, I didn’t mind seeing another country’s take on a familiar alien invasion story.