Posted in: Disc Reviews by Gino Sassani on October 15th, 2018 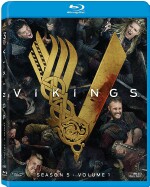 “All things change. This world is impermanent and deceiving. Many things are not what they seem. You will have many adventures here. And if we live, many stories to tell at the Great Hall. If we live.”

When Vikings started five years ago, I found it to be quite an ambitious task for a network that usually featured documentaries and reality shows about odd jobs. I approached this one with some caution. Now I’ve thrown caution to the wind for these compelling characters. I was particularly drawn into the lead. Travis Fimmel was outstanding as the Viking leader Ragnor Lothbrook. When his character was killed off after three years, I suspected things would be winding down for this experiment. I could not have been more wrong. Alex Hogh Andersen plays Ivar, his crippled son, who rises to be more powerful and more brutal that Ragnor ever was. The actor shares many of Fimmel’s characteristics, both in his physical look and the way he carries himself. It’s one of the most perfect father-and-son casting pairs I’ve ever encountered. Because of Andersen, the show has been reborn, and there’s still a lot of life in this series. The release of the first half of Season 5 is another strong contribution to your home entertainment library.

The first few episodes here cover the Vikings and their attempt to conquer York, which, of course wasn’t really called that at the time. From this point many of the characters are going on very different journeys, and the show splits its time with several threads that are fated to collide in the last few episodes here.

Ivar has just killed his brother and is hoping to defeat York so that he’ll have the resources to take back his home. The character ends up on a path that is very much like that of his father in the first season. Like Ragnor, he ends up admiring a holy man who fought bravely and was one of the battle’s few survivors. Jonathan Rhys Meyers plays Bishop Heahmund. The actor has some experience playing in historical pieces. He was Henry VIII in The Tudors for many years. Here he plays a bishop who is also a grand fighter with a sword the likes of whom Ivar has never seen. Like his father, he takes the holy man as a slave but converts him to fight for him. He’s fascinated by the man’s faith, just as Ragnor was of Athelstan (Blagden). The difference here is that Heahmund has plans of his own and isn’t quite to be trusted.

Bjorn (Ludwig) has a different journey. He ends up in Sicily looking for partners to help him fight the remains of the Roman Empire. There he finds himself in the middle of a feud between Sicily and northern African Arabs and a cunning woman who puts them in the middle of the fight. This story arc treats us to a very different kind of place than this show usually takes us. This is a land of endless desert with nary an ocean wave in sight. Bjorn is out of his element, and it’s a great contrast to the shoreline locations most of the series delivers. These locations continue to be quite stunning.

Floki (Skarsgard) has another path. He decides to build a small boat and set himself adrift so that the gods may take him where they want him to be. He finds a land of volcanic ash and mountains and believes it is the land of the gods. So he returns to recruit a community to settle there. Unfortunately, that’s going to put him at odds with Lagertha (Winnick), who will need every able body she has to fight Ivar when he finally comes to reclaim his father’s throne and get his revenge for Lagertha killing his mother. A civil war is brewing, and that’s exactly where these 10 episodes are leading. The last three episodes of this release will be the brother-against-brother fight.

Each episode is presented in its original aspect ratio of 1.78:1. The 1080p image is arrived at with an AVC MPEG-4 codec. The high-definition image presentation is true to the broadcast quality and then some. You’ll appreciate the textures particularly. This is a rather dirty world, and the production design has coated everything in that layer of mud or dirt. The presentation delivers it. There are also some stunning vistas here, and the cinematography is something to behold. The transfer here delivers that painstaking effort. The image is sharp and crystal clear. The color palette is often cold. I’m impressed at how the show’s lighting gives us a wonderful indication of climate. Seasonal changes show wonderfully in the shape and quality of the light. Black levels are pretty much inky black. There is one instance of a serious flaw. A couple of the scenes in the French court during the attack on Paris appear to have odd focus issues. One instance was hard enough on my eyes that it started to cause a headache. I believe it is likely connected to the greenscreen work and an issue blending it into the set.

Each episode also has a 2-3 minute behind-the-scenes feature.

The only true flaw here is how blatantly ambitious it truly is. Most shows would have stretched this out to a full 20+ season. There is no time to slow down here. You have to pay attention or you miss something important. You can’t allow your attention to stray, or you’re lost. This isn’t a great show for streaming. You need the stable picture that comes from having the discs. It’s worth the money. “There are many things you don’t understand about how the world works here. If you take my advice, you will take it as it appears. That is the best way.”

Gino Sassani is a member of the Southeastern Film Critic's Association (SEFCA). He is a film and television critic based in Tampa, Florida. He's also the Senior Editor here at Upcomingdiscs. Gino started reviewing films in the early 1990's as a segment of his local television show Focus. He's an award-winning recording artist for Omega Records. Gino is currently working on his 8th album Merchants & Mercenaries. Gino took over Upcomingdiscs Dec 1, 2008. He works out of a home theater he calls The Reel World. Favorite films: The Godfather, The Godfather Part II, The Body Snatcher (Val Lewton film with Karloff and Lugosi, not the pod people film), Unforgiven, Gladiator, The Lion King, Jaws, Son Of Frankenstein, The Good, The Bad And The Ugly, and Monsters, Inc.
First Man “31 Nights Of Terror” The Haunting Of Hill House (2018)