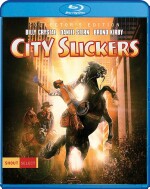 I still remember pretty clearly my dad suggesting we go check out a matinee of City Slickers. I was visiting him in New York City during the summer of 1991, and my 8-year-old self had no idea what a “city slicker” (or even what a Billy Crystal) was. That being said, I was completely delighted by the movie and have re-watched it many times throughout the years. (The calf birthing scene, in particular, stuck to my innocent, 8-year-old brain.) I recently got a chance to revisit the crowd-pleasing, cowboys-and-yuppies comedy once again thanks to this new Collector’s Edition Blu-ray courtesy of Shout! Factory.

“You know, maybe it’s just me, but I think our little adventures lately are becoming…stupid, you know?”

Mitch Robbins (Billy Crystal) is a 39-year-old New York City radio station ad exec going through a mid-life crisis. He’s got an unfulfilling job and hasn’t felt connected to his family for a long time. As a birthday present, his two closest friends — thrill-seeking womanizer Ed (Bruno Kirby) and emasculated/unhappily married Phil (Daniel Stern) — propose taking Mitch on a cattle drive from New Mexico to Colorado. Even though Mitch was slated to visit in-laws in Florida, his wife Barbara (Patricia Wettig) urges him to go on the trip and “find his smile.”

The three friends arrive for their Western adventure and quickly realize it won’t be a posh vacation at a dude ranch. The group of city slickers — which also includes a father-son team of dentists (Bill Henderson, Phill Lewis), sibling ice cream company owners Ira and Barry (David Paymer, Josh Mostel), and the lovely Bonnie (Helen Slater), whose companion canceled at the last minute — is tasked with actually driving a herd of cattle to Colorado under the watchful eye of badass, crotchety trail boss Curly (Jack Palance). They get more than they bargained for when disaster strikes and they have to rely on their newly-acquired cowboy skills.

City Slickers is directed by Ron Underwood (Tremors, Heart and Souls) from a script by Lowell Ganz and Babaloo Mandel (Splash, A League of Their Own), who heavily collaborated with Crystal on the story. Underwood stages the cattle driving sequences that make up the bulk of the film’s second half more as a credible Western than a big screen comedy. And even 27 years later, the concept of pressing pause on your soul-crushing everyday work life to get away and do something out of your comfort zone remains completely relevant. Given how addicted most of us are to screens, I’m surprised City Slickers hasn’t been “rebooted.” (Although I did enjoy this recent sci-fi twist.)

Of course, the movie worked in 1991 — and has endured as a crowd favorite ever since then — largely due to the wisecracking charms of its star. City Slickers marks the absolute peak of Billy Crystal as a movie star; he had just shared top-billing with Meg Ryan on the classic rom-com When Harry Met Sally…With City Slickers, Crystal conceived of a project that plays to his strengths: the fish-out-of-water visual of such a quintessential New Yorker driving cattle while wearing a Mets cap is indelible. He’s also got great chemistry with his co-stars, including Kirby (who’d also appeared in When Harry Met Sally…) and Stern (who gets to use some of the same physical comedy chops he’d deployed the previous year for Home Alone).

But it’s Palance who stole the movie and won a Supporting Actor Oscar for his winningly gruff work in City Slickers. (Curly is in the movie less than I remember, which speaks to Palance’s lasting impact in the role.) The big-screen veteran built a career out of playing exceedingly manly characters who let their actions speak for themselves, making him a perfect comic foil for Crystal’s more verbal style of humor. Just seeing the towering Palance — who memorably celebrated his Oscar win with one-handed pushups — and Crystal on screen together is enough to elicit laughs. The only competition Palance has for the scene-stealing crown is Norman, the adorable calf Mitch has to birth during the cattle drive. (Although keep your eyes peeled early on for Jake Gyllenhaal as Mitch’s unimpressed son.)

Nearly 30 years later, City Slickers remains a comedy about very adult issues (dealing with aging/depression) that can be enjoyed by the entire family.

City Slickers is presented in an aspect ratio of 1.85:1. The 1080p image is arrived at with an AVC MPEG-4 codec at an average of 31 mbps. This Collector’s Edition offers a “new 4K transfer” of the 1991 film, and there are more than a few segments that are genuinely striking with how good they look after 27 years. (I was a bit worried after the blurry Pamplona, Spain crowd footage that opens the film.) The absolute best parts of this image involve the rich, earthy browns and the resplendent blue Mets cap sky of the daytime scenes during the cattle drive. Both medium shots and close-ups of the actors are noticeably cleaner during these moments. This presentation actually has a healthy amount of filmic grain, which is more noticeable during nighttime scenes and the cooler-toned NYC portion of the film. I really appreciate the fact that this newer transfer didn’t scrub away some of that original texture and remained pretty faithful to rough-and-tumble original image.

The DTS-HD Master Audio 5.1 track gets to flex its muscles because City Slickers is sonically closer to a Western action/adventure than a typical dialogue-driven comedy. That’s apparent right from the start, thanks to the sub support for the running of the bulls opening sequence. The subs also provide a nice, low rumble during a coffee maker-driven stampede as well as the movie’s climactic thunderstorm. The track’s liveliness even extends to the animated opening credits, featuring a cartoon cowboy roping in the cast and crew names from off-screen. (The pratfalls can be heard in the rear speakers.) Marc Shaiman’s memorably rousing score also feels appropriately robust on this disc.

All of the bonus material is presented in standard definition and has been ported over from a previous Blu-ray release.

Audio Commentary with director Ron Underwood and stars Billy Crystal and Daniel Stern: Crystal (famously a lifelong Yankees fan) explains how he ended up wearing Mets gear throughout the movie, and the trio repeatedly points out that this film was made before CGI became commonplace. (Meaning those are real bulls and real stampedes on screen.) They also share fond memories of working with the crusty Palance, who had a tense standoff with Underwood during his first day on set. Overall, this track feels like you’re watching the movie alongside three funny friends.

Back in the Saddle — City Slickers Revisited: (28:59) Cast and crew look back at the impact of the comedy hit and share memories of making the movie in Colorado. (Crystal was actually a natural on horseback, while Stern…was not.) The featurette also covers the genesis of the project: Crystal got the idea for the story while watching a show about fantasy vacations.

Bringing in the Script — Writing City Slickers: (20:59) Lowell Ganz and Babaloo Mandel are the credited screenwriters, but Crystal had a ton of input into the story. (The trio gushes about their harmonious collaboration.) I like that this featurette is a bit on the longer side, since it really delves into the mechanics of the screenwriting process. (Ganz and Mandel admit they didn’t set out to write a “mid-life crisis movie.”)

A Star is Born — An Ode to Norman: (6:14) The “unsung star of City Slickers” gets some love in this featurette, which also covers the making of the memorable calf birthing scene. Underwood said he toyed with the idea of having Crystal birth a calf for real, but the production ultimately built a prosthetic for him to get his hands on in.

The Real City Slickers: (8:55) Penny Persson, owner of the Colorado Cattle Company & Guest Ranch, admits this movie was a boon for business. This featurette profiles some real-life guests looking to make their cowboy (and cowgirl) dreams come true.

Deleted Scenes: (2:48) Underwood notes that almost everything that was shot for City Slickers ended up in the theatrical cut…except for the two sequences shown here. One of them shows the main characters releasing the cattle they herded to Colorado after learning they were slated to become steaks and burgers. The second scene hints at a brighter professional life for Mitch thanks to a collaboration with the ice cream brothers.

I first saw this movie when I was 8 and today I am 36 years old, which is startlingly close to Mitch’s age in this movie. (I haven’t felt any mid-life crisis symptoms yet, but I’ll you guys know if I do.)

I’ll always have a fondness for City Slickers because it reminds me of my dad, who passed away recently. Naturally, seeing the movie as an adult is a much different experience, but no less pleasurable. If it’s not in your collection yet, definitely pick up Collector’s Edition, which doesn’t include any new bonus material but is the best this movie has looked on home video.

“31 Nights Of Terror” Ash vs. The Evil Dead: The Complete Collection Old Man and the Gun