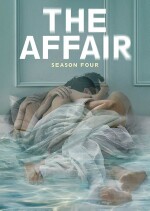 “Why make things simple when they can be painful and difficult?”

The current TV landscape is overflowing with “limited series” and anthologies that reboot themselves each year with new characters and storylines. The Affair, which premiered in 2014, seemed ready-made for that formula: each season could’ve followed different adulterous encounters in a wide variety of settings. Instead, the perspective-shifting Showtime drama has followed the same group of sad sacks through multiple years as they deal with the fallout of a single Long Island dalliance. The good news is this fourth season serves as both a soft reboot for the series and a swan song for a couple of major characters.

Here’s a quick catch-up in case you’ve never seen the show. The first season of The Affair chronicled the extramarital relationship between struggling novelist Noah Solloway (Dominic West) and emotionally troubled waitress Alison Bailey (Ruth Wilson). Most of the first season’s episodes depicted their budding connection from their two slightly differing points of view, and it was fun playing a game of “spot the difference” each week. Season 2 expanded to include the viewpoints of Helen (Maura Tierney) and Cole (Joshua Jackson), Noah and Alison’s respective ex-spouses, while season 3 included a three-year time jump and teased a move to France during its finale.

Season 4 completely disregards the French storyline and instead places hardcore East Coaster Helen and new partner Vik (Omar Metwally) in Los Angeles for Vik’s prestigious job at a West Coast hospital. Noah also relocates to California and takes a teaching job at Compton Academy in order to be closer to his two younger children, despite the fact that they openly detest him. Meanwhile, Cole and Alison are still partners in a successful restaurant in Montauk, much to the chagrin of Cole’s second wife Luisa (Catalina Sandino Moreno). Alison is channeling her grief over losing a young son into her work as a counselor to other grieving women, while Cole mostly just does a poor job hiding his undying love for Alison. The first half of the season also includes flashforwards with Noah and Cole teaming up — talk about an unlikely partnership — to find Alison, who has gone missing.

The original sin of Noah and Alison’s affair feels like a drop in the ocean when you consider everything that has transpired since the end of the first season. With Noah and Alison on separate coasts for almost the entire fourth season, the show uses different characters to explore adulterous relationships. Emily Browning joins the fray as Sierra, Helen and Vik’s fetching and flighty California neighbor. Alison also connects with Ben (Ramon Rodriguez), who counsels veterans with PTSD and is hiding a few secrets of his own. Meanwhile, Cole spends an entire episode learning about an affair his late father had with a free-spirited woman named Nan (guest star Amy Irving).

Creators Sarah Treem and Hagai Levi previously experimented with TV drama conventions with HBO’s In Treatment. With The Affair, they continue to play around with the mechanics of storytelling and the notion that everyone views themselves as the hero of their own life story. (The show suggests there might not be a huge difference between writers and sociopaths.) My biggest knock against the show — other than the fact that the four main characters are thoroughly unlikable and only occasionally fascinating — has always been that Treem and Levi seem to be working from the premise of, “Let’s see how miserable we can make these people’s lives.”

While the show is still chock full of drama and tragedy, The Affair also manages to let a little light in during this fourth season. (Maybe the move to sunny L.A. did it.) In addition to an amusing flashforward sequence in which one character comically breaks down the rollercoaster relationship between Noah and Cole, the series pokes plenty of fun at the New Age-y side of California.

The apex is Ep. 7, which finds perennial New Yorker Helen traveling to Joshua Tree with Sierra for a women’s retreat. That seventh episode is a great showcase for Tierney, just like Ep. 8 (Cole becomes increasingly distraught in his search for Alison) and Ep. 9 (we find out why Alison was missing) highlight the talents of Jackson and Wilson, respectively. The standout hour is Ep. 9. Instead of splitting the perspective between two different characters, we see the same evening play out from Alison’s point of view twice: one is an impossibly romantic version of events, while the other is the starker reality.

The weak link continues to be West — it kinda pains me to say that as a big fan of the actor’s work on The Wire — who is all over the place compared to his co-stars’ more nuanced work on the show. Noah is alternately a cocksure literary star, sensitive ladies’ man, and an immature jerk. He spends a good part of the season mentoring a gifted young writing student named Anton (Christopher Meyer), but the show just can’t resist pairing Noah with Anton’s mother Jenelle (Sanaa Lathan), who is also the principal at the school where Noah teaches.

The Affair: Season Four features all 10 episodes on four discs. The special features — a “Sink Back into the Ocean” featurette focusing on Alison’s arc on the show and “Character Profiles” for Noah, Alison, Helen, Cole, Ben, and Vik — can be found on Disc 4.

At the end of season 3, I felt like The Affair had completely exhausted these characters’ stories. Turns out I was half right: the show is slated to return for a fifth (and final) season next year without two of its core four cast members. As a result, this fourth season served as a mini resurgence for the series and a fitting (and characteristically bleak) goodbye to a pair of original characters.