The Affair: Season One 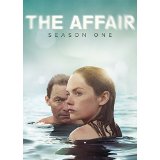 The notion that there are two sides to every story is at the center of The Affair. Almost every episode depicts the same events related to the titular adulterous relationship from two different perspectives. It’s an ingenious and inclusive storytelling tool because TV viewers are encouraged to spot the differences in each character’s account of events. (Along with inconsistencies in hairstyles, wardrobe, wallpaper, etc.) That’s why I was somewhat disheartened by the latter portion of the season veering away from what made the show great.

We first meet schoolteacher/struggling author Noah Solloway (Dominic West) as he prepares to head to Montauk, Long Island for the summer with his well-to-do wife Helen (Maura Tierney) and their four children. (We immediately get the sense that these kids are a handful; within the first 30 minutes of the pilot, one of the kids almost chokes to death while another pretends to commit suicide.) With Noah’s harried home life quickly established, it’s easy to understand why he’s drawn to the beguiling, free-spirited waitress the family first encounters at a Montauk diner. Except things aren’t exactly what they seem.

The waitress is Alison Bailey (Ruth Wilson), and we get a different picture when the show presents things from her point of view. Alison is considerably less femme fatale-ish and more outwardly sad and emotionally damaged. The story hints at a personal tragedy that drove a wedge between Alison and her husband Cole (Joshua Jackson), who is the unofficial head of an influential ranching family. Noah and Alison keep bumping into each other — Noah is ostensibly doing research for a new book — and grow closer as a result. As all that summer lovin’ is playing out, we also get periodic flash forwards of Noah and Alison being interviewed by a detective named Jeffries (Victor Williams) about some unspecified crime.

The True Detective-ish interrogation scenes in the near future help explicate the show’s structure; the reason we’re seeing the same events depicted twice is because Noah and Alison are each offering their side of the story to Det. Jeffries (who slips in a few lies himself). Unfortunately, these scenes are also what ultimately muddy the storytelling waters. (Speaking of water, the show’s evocative theme song is performed by Fiona Apple.) The show is at its strongest when it’s playing with the idea of perception, both in how we see ourselves and how we are perceived by others.

The Affair somewhat loses the plot soon after Noah and Alison consummate their extramarital flirtation and the focus shifts to the mysterious future crime that has landed the pair of them in an interrogation room. Instead of subtle differences between Noah and Alison’s stories, we start to get wildly different accounts of what happened. (The cliffhanger at the halfway point of the season finale is the most egregious example.) I understand the idea of them being unreliable narrators. But instead of having the truth lie somewhere between Noah and Alison’s stories — like it does in the first two-thirds of the season — the totally different presentation of events makes it harder to believe (and invest) in what we’re seeing. And in much simpler terms, the mysterious crime involves a character we barely know or care about, so the whole things feels like much ado about nothing.

The good news is there’s still plenty here to like, including top-notch production values that make Montauk look alternately enchanting and depressing. (It also looks real, unlike the version of the Hamptons in Revenge.) The series is created by Sarah Treem and Hagai Levi, who previously experimented with TV drama conventions with HBO’s In Treatment. In addition to veteran TV director Jeffrey Reiner (who directed half of the first season’s 10 episodes), Treem and Levi enlisted thoughtful feature filmmakers Carl Franklin (Devil in a Blue Dress) and Ryan Fleck (Half Nelson) to lend Noah and Alison’s affair a grander sweep.

The writers also play around with the format just enough to prevent things from becoming stale and predictable. So while the first three episodes play out the exact same way — Noah’s description of a certain time span; rewind so we can see it from Alison’s angle — Ep. 4 shows one hour-long, continuous story while still switching perspectives halfway through. Ep. 5 finally flip-flops convention and shows Alison’s story first. I thought this was especially important because consistently allowing Alison to have the last word gave her version of events a subliminal “…but here’s what really happened” vibe.

Extramarital affairs aren’t usually the basis of dramatic series; they’re typically a reliable source of conflict for the stable relationships that serve as the foundation of most TV shows. As a result, the characters here aren’t particularly likable. Fortunately, the core cast is compelling enough to make us watch them fumble through their issues. On paper, the strapping West is all wrong for the role of a neutered, insecure author with writer’s block. It proves, however, to be an inspired choice…or at least one that explains why Noah is such a chick magnet. In the end, it works because West specializes in playing men who can’t get out of their own way. Wilson has a clearer emotional arc to play and delivers an affecting (and Golden Globe-winning) performance; just like Noah, we’re drawn into Alison despite all the red flags.

Tierney and Jackson are each quietly terrific in their limited parts. The two of them also get to essentially play two different characters, since we get to see Helen and Cole from Noah and Alison’s perspective. I also got a kick out of the Wire reunion that took place during any scene between West and John Doman, who plays Noah’s repugnant, condescending father-in-law.

The Affair: Season One features all 10 episodes on three discs. The special features — character profiles, cast biographies, and a featurette called “A Tale of Two Costumes” — are available on Disc 3. There is also a fourth disc that lets you sample episodes of Showtime/CBS series like Happyish, Ray Donovan, and Madame Secretary.

The debut season also picked up a Golden Globe for Best Drama series. Season 2 is set to premiere Oct. 4, and I’m curious to see which direction Treem and Levi decide to go. There’s talk that we’ll get to see things from Helen and Cole’s perspective too. While I’m in favor of giving Tierney and Jackson more to do, I’m not really sure that what this show needs is *more* storytelling confusion. I think The Affair would be better served by going back to basics and reinvesting in the simple, striking idea that we’re each the heroes of our own stories.