The Americans: The Complete Final Season 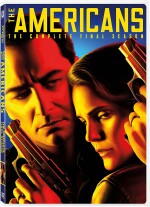 When The Americans received a two-season renewal back in 2016, the news was met with unanimous enthusiasm. Fans of FX’s acclaimed (but low-rated) spy drama were guaranteed two more years’ worth of stories, while TV critics applauded the fact that creator Joe Weisberg and Co. could carefully plot out their show’s endgame. Sadly, the first half of that deal resulted in a penultimate fifth season that frustratingly punted a lot of the show’s more pressing plotlines. The sixth and final season of The Americans offers a thrilling and heartbreaking conclusion, even though it also kind of comes off as the brilliant kid who waited until the very end to cram before a big test.

A quick catch-up in case you’ve never seen The Americans. The series began during the early 1980s and focused on Philip and Elizabeth Jennings (Matthew Rhys, Keri Russell), who appeared to be a picture-perfect couple. The married travel agents had a curious daughter named Paige (Holly Taylor), an easygoing son named Henry (Keidrich Sellati), and they lived in a nice house in the Washington, D.C. suburbs. The only thing wrong with this picture is that Elizabeth and Philip were actually KGB agents, a fact they have kept hidden from Henry and continue to conceal from Stan Beeman (Noah Emmerich), the FBI counterintelligence agent who lives in their neighborhood.

Season 6 begins with the show’s biggest time jump to-date. The action begins in 1987, which is about three years after the events in season 5. It’s also a couple of months before the famous Washington Summit between then-U.S. president Ronald Reagan and Soviet leader Mikhail Gorbachev to discuss, among other topics, a nuclear arms treaty. In the ensuing three years, Philip quit the spy game to legitimately run the travel agency that previously served as the couple’s cover. As a result, Elizabeth has taken on the enormous burden of doing the couple’s spy work almost entirely by herself. Paige is now a college student who is also working as a Soviet agent-in-training with Elizabeth, who tries (and lies) her best to keep her daughter from the more unsavory aspects of spy work.

I’ve always felt that the most brilliant thing about The Americans is that the show has framed the incredibly complex lives of a pair of Russian spies as a family drama pretty much anyone can relate to. In season 6, the idea that parents might each have their own favorite kids — Philip is closer to Henry almost by default, since Elizabeth and Paige are working so closely together — is thrown into sharper focus. More importantly, the growing rift in Philip and Elizabeth’s marriage gets a turbo boost once Philip is recruited by Soviet forces who are sympathetic to Gorbachev and seek a more peaceful relationship with the U.S. to spy on Elizabeth, who believes a plan to overthrow Gorbachev is the best course for Russia.

It’s also a cruel joke that Philip realizing his version of the American Dream by owning a legitimate business also comes with a depressing downside. (After all, what’s more “American” than Philip struggling to pay for his son’s expensive boarding school?) That question actually made me wish the show hadn’t “yadda-yadda”-ed as much as it did during its three-year time jump, which also included Stan taking a step back from counterintelligence work and marrying the exceedingly curious Renee (Laurie Holden).

For example, I feel it would’ve been interesting to see some of Philip’s more successful days as a business owner instead of cutting straight to his desperate times. Meanwhile, a quick look at Elizabeth’s weathered, chain-smoking face tells us pretty much the same thing the show spends the first handful of episodes hammering home: the violent toll of the Jennings’ spy work is destroying their lives. This final season doesn’t really get cooking until about Ep. 5/“The Great Patriotic War,” which features Philip taking a firm stand against Elizabeth’s mission and literally sparring with Paige after she questions his toughness.

Ep. 7/“Harvest” features a disastrous mission in Chicago; a brutally violent sequence is also touching because it brings Philip and Elizabeth closer than they have been in a very long time. Meanwhile, the supersized series finale/“START” features a fantastic use of U2’s “With or Without You” and a heart-stopping sequence inside a garage. (I don’t remember breathing the entire time.)

The Americans: The Complete Final Season features all 10 episodes on three discs. The special features — Deleted Scenes, a Gag Reel, and Inside Looks — can be found on Disc 3. Rhys won a long-overdue and well-deserved Best Actor Emmy for his work during this final season, and Russell (as always) was just as good. Emmerich also delivered his absolute best work during the series finale, which hinged heavily on Stan.

Weisberg and Joel Fields won an Emmy for writing the finale, but I felt their decision to focus so much of the show’s endgame around Stan’s relationship to the Jennings was a key miscalculation. (I think this “final season” would’ve worked even better as the lead-up to the show’s actual swan song.) Breaking Bad didn’t end with Hank finding out about Walt, and Dexter didn’t end with Debra discovering her brother’s dark secret; those were both key developments on the way to the story’s actual conclusion. (Although the less said about Dexter’s actual conclusion, the better.) Then again, I’ve already admitted that for me The Americans was never about Stan uncovering the Jennings’ secret or even about whether Renee is a KGB agent. The greatness of the series lies in the fact that it’s an excellent family drama in every sense of the word…and one of the best shows of this decade.