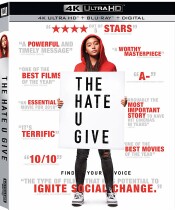 In The Hate U Give, the fatal shooting of a young, unarmed black man by a police officer serves as the catalyst for a story about racial identity, police brutality, and much more. The film features some undeniably powerful performances and moments that, quite frankly, spoke to me on a personal level. The problem is that as the story’s level of outrage rises, the movie itself becomes more outrageous and harder to take seriously.

Although the fatal shooting is the movie’s inciting event, The Hate U Give is actually the story of Starr Carter (Amandla Stenberg), a teenager torn between her home life in the poor, predominantly black Garden Heights neighborhood and her tony, predominantly white prep school. Her father Maverick (Russell Hornsby) is a former gang member who encourages Starr and her brothers to wear their blackness as a badge of honor while imploring them to be exceedingly careful during any interaction with police officers. So when Starr and her childhood friend Khalil (Algee Smith) get pulled over for a minor offense, she knows exactly what to do. Unfortunately, she can’t convince the brasher Khalil to follow suit, which leads to his tragic death.

“You know how they do: shoot first, ask questions later.”

Khalil’s death sparks an immediate controversy, and Starr is called upon to testify as the only witness to the shooting. Her mom Lisa (Reginal Hall) is concerned about the intense attention that will be placed on Starr, especially when outspoken activist April Ofrah (Issa Rae) encourages Starr to take her story to the media. Meanwhile, local Garden Heights gang leader King (Anthony Mackie) tries to discourage Starr from sharing Khalil’s story in front of a grand jury since Khalil was dealing drugs for him. As a result, Starr has to find her voice and risk alienating at least half of the people in her life to do what is right.

“Know your rights…know your worth.”

The Hate U Give is based on the 2017 best-selling novel by Angie Thomas and borrows its title from the late Tupac Shakur. (Tupac felt “THUG LIFE” stood for “The Hate U Give Little Infants F—s Everybody.”) Thomas based the novel on her own experiences as the lone black girl at a Mississippi private school, so it’s no surprise that the film’s first 30 or so minutes establishing Starr’s inner conflict contain the strongest material. Starr’s barely concealed bitterness over the fact that the white kids at her school get to “act black” while she has to be careful not to present herself as “too hood” is the sort of nuanced, everyday struggle that should be shown on screen more often. (As is the flip side of that, where Starr feels like a bit of a traitor leaving her neighborhood friends behind too attend a fancy prep school.)

Too bad that virtually all nuance flies out the window following the shooting death of Khalil, which director George Tillman Jr. films almost entirely from Starr’s perspective. (You don’t even see the police officer’s face until after the fatal shooting.) Thomas’s connection to the ensuing drama and media circus isn’t as strong as it is to Starr’s plight before the shooting — check out the “Special Features” section for more information — and the result is a justifiably angry, but increasingly loud and melodramatic second half that threatens to drown out some of the story’s most important points about systematic racism.

Stenberg was previously best known for a small but crucial role in The Hunger Games, but she more than capably steps up to carry the weighty drama of The Hate U Give. That being said, Tillman and screenwriter Audrey Wells rely a little too heavily on voiceover narration, which is a shame considering they have such a strong, expressive performer as their lead. The other standout here is Hornsby, who is both believable as a thoughtful, caring father/husband and as a militant member of the African American community.

Hornsby is so good that I didn’t totally buy Mackie as his supposedly scary counterpart/former boss. Common — who has been building up quite the strong acting resume in recent years — is also good but underused as Starr’s Uncle Carlos, a police officer. (To be fair, Carlos gives voice to the nearly impossible job police officers have as they try to keep the peace while protecting themselves.) Smith is indispensably charismatic in his brief time as Khalil, while K.J. Apa is solid as Starr’s supportive, white prep school boyfriend…at least until the character reveals a cartoonishly naïve attitude about race relations during Starr’s meltdown at prom.

But that’s nothing compared to the (literally) explosive finale that will legitimately have you wondering how far this movie will go to make its point. Although that’s not a bad thing for dramatic purposes, The Hate U Give clocks in at a hefty 133 minutes, which is frankly a bit exhausting considering the well-intentioned but nonstop melodrama on display.

The Hate U Give is presented in an aspect ratio of 2.40:1. The ultra-high definition 2160p image is arrived at with an HEVC codec at an average of 62 mbps. The strong visual presentation on this disc really helps hammer home the notion that Starr occupies two different worlds. The scenes in her Garden Heights neighborhood feature consistently warm flesh tones despite being fraught with physical danger. Meanwhile, the sequences at Starr’s prep school are sterile and chilly, which reflects the way Starr and her alien surroundings keep each other at arm’s length. There are impressively inky black levels throughout this blemish-free HDR presentation, which come in very handy during the climatic nighttime protest.

The DTS-HD Master Audio 7.1 track absolutely rises to the occasion as the movie becomes more bombastic. Yes, this is still a dialogue-driven drama at its core, but the 7.1 presentation doesn’t feel like overkill because this track does such an effective job of immersing us in Starr’s world(s). Thanks to the subwoofer, we feel the thumping hip-hop in a Garden Heights house party and inside the Beats headphones Chris slips onto Starr’s ears at school. The track is most impactful, however, when the movie’s climactic protest devolves into chaos; the rear and side speakers explode to life with frantic activity, while the subs help accentuate some of the explosions on screen and Dustin O’Halloran’s pulsating score.

The Feature Commentary is available on the UHD copy of the film. All the other bonus material, including the commentary, can be found on the Blu-ray disc.

Commentary by director George Tillman, Jr., stars Amandla Stenberg and Russell Hornsby, author Angie Thomas, and editor Craig Hayes: This commentary track is (understandably) heavy on cast and crew members sharing personal experiences, including Hornsby delivering “the talk” about police brutality to his own boys in real life. The group also warmly refers to Thomas’ book as “the Bible” since it served as such a crucial reference point during production. That being said, Tillman also notes changes that were made to the novel, including moving Maverick’s “talk” with his kids to the very beginning of the film.

Extended Scenes: (15:21) There are three scenes, including an even longer version of the hellish protest-turned-riot sequence from the film’s final act. Features a Play All option.

Starting a Conversation: (10:07) The people behind The Hate U Give express their hope that anyone who watches this film will heed its title and bypass Hate in favor of starting productive conversations about police brutality, undercover racism, and more.

The Talk: (8:25) The film’s African-American cast and crew members reminisce about the first time they received “the talk” warning them of the extra precautions they’d have to take during interactions with police officers.

Code Switching: (8:46) Author Angie Thomas recounts her real-life version of Starr’s “code switching,” having to present herself differently in her neighborhood and at school around her white colleagues. In the end, cast and crew urge anyone dealing with the same conflict to try and stay true to themselves.

Starr — Shine Your Light: (13:42) Thomas talks about the real-life experiences that inspired her best-selling novel, including being the only black girl in her private school and how the Oscar Grant shooting hundreds of miles away affected her deeply. This featurette dives deeper into the genesis of the story.

The Heart of Georgia: (5:05) Cast and crew members rave about filming in Atlanta, which offers varied locales for exterior shots (Starr’s prep school, Maverick’s grocery store) and is bursting with other film and TV projects.

Thank U Georgia: (2:11) Ok, so two different featurettes extolling the virtues of making movies in Atlanta is 1-800-TOO-MUCH. Skip this one.

The Hate U Give obviously tells a very timely story about an extremely sensitive subject. I don’t totally mind that the film ends up being imbalanced in approaching this material from the African American perspective. (If you’re looking for a movie about race relations told from the white perspective, feel free to check out…well, almost any prominent movie about race relations that’s ever been made, including the delightful and thoroughly entertaining recent Best Picture nominee Green Book.)

While this film is ultimately flawed and overwrought, it’s worth a look given the strong performances and important message at its core. It’s also nice to have a prominent young adult adaptation on the big screen that is grounded in the here and now instead of some sort of dystopian future…or following the misadventures of sparkling vampires.