Posted in: Disc Reviews by Brent Lorentson on May 29th, 2019 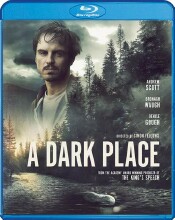 Did you ever wonder what it would be like if on the many journeys Forrest Gump took, one of them involved him trying to solve a young boy’s disappearance and eventual murder?  I didn’t think so.  I’m not trying to be funny, but for the most part that is basically the gist of A Dark Place, where we see a young man who is on the spectrum become obsessed with solving a murder.  It’s not that people who are on the spectrum can’t be highly intelligent and problem solvers, but this film takes things to another level, to where disability or not, no one could get away with what occurs in this film.  Sure, there are movies that are about escaping reality, and one shouldn’t judge it for its realism, but when a film is attempting to be a slice of life in this small town that is devastated by the loss of a missing child, well, there comes a point where the audience should be allowed to call BS.

When we first meet Donny (Andrew Scott), he’s a trash collector in a small town.  He’s a likeable guy, but we see early on that he’s on the spectrum and most likely has OCD amongst other things.  The way Scott plays this character makes him very likeable from the start, and that’s important, because as the film plays out he does some questionable things, and it’s important to see that they are done with the best intentions.  Along for the ride is his partner, Donna (Bronagh Waugh) who is doing her best to break through some of Donny’s emotional walls and quirks.  The moments between Donny and Donna are some of the best moments in the film, and it doesn’t take long to see the potential relationship between the two. Unfortunately, Donny is still carrying a torch for the mother of his child. To be fair, this side story of Donny attempting to pursue a relationship with his ex really brings down the story and serves to do nothing but attempt to make us feel sorry for the guy when that’s not even necessary.  The movie is 89 minutes; time is simply wasted as though it were padding.

As for the meat of the story, where we see Donny become obsessed with a missing child and take it upon himself to question people around town as though he were a cop…I’m fine with a movie trying to show us a different kind of vigilante trying to right a wrong in his small town, but the way this plays out just feels silly.  I mean, when he starts going after the kids in the neighborhood and the police don’t bother to interfere despite them knowing what he’s up to, well, it just doesn’t sit right.  Things go even more overboard after the body is found and buried. Donny goes through the trouble of digging up the body and takes it to another town to test and see if the boy was abused.  Even when a confrontation occurs, the outcome is utterly ridiculous.

I went into this with no expectations, but I was a fan of Andrew Scott from seeing him in Sherlock. He’s a great actor, and he does a good job here, but it is simply not enough to salvage this dark yet silly story.  This could have easily been taken more seriously if out of simple common sense we saw more involvement from the police, giving Donny more resistance, but this simply doesn’t occur.  Then when the movie does reach its end, it manages to feel rushed and anti-climatic and just leaves the viewers unfulfilled.  There are certainly worse directions this film could have gone, but that doesn’t make the film any better for it.

A Dark Place is presented in the aspect ratio 2.35:1.  The 1080p image is arrived at with an AVC MPEG-4 codec at an average of 35 mbps.  The look of the film is definitely one of the positive things the film has going for it.  Greens come through beautifully here. Oddly enough, the only time I recall blues really popping involved the Trump posters that seemed to fill the shots in the opening scenes.  Considering this is a small rustic town, we are given a more bland color palette for the most part.  When we get to the stream where a young girl finds the missing boy, the reveal is done with nice cinematography, but the movement of the water is one of those details that come through beautifully in Blu-ray.

The DTS HD-Master Audio 5.1 track is rather bland; mostly this is a dialog-driven story, so of course the emphasis is on the characters.  There is a score, but to be honest it wasn’t something I would consider memorable. The few times we get the use of ambient sound, it’s most notable when we’re in the woods and at the river when the body is found.  This isn’t a bad track, but this really isn’t something that begs to be heard in surround.

Featurette: (10:19) Interviews with the cast and crew about the story and the need to film on location.

The best thing going for this film is that it’s short and the acting elevates the story more than it deserves.  While I don’t hate the film, it’s mind-boggling how inept some of the storytelling is at times. If you are really having a hankering to see this, wait for Netflix.

Brent Lorentson is a horror writer and film critic based out of Tampa, Florida. With a BA in Digital Film, he co-wrote and co-directed Scavenger Hunt. His short stories have appeared in various horror anthologies. In 2019 his short script Fertile Blood will be a part of the anthology horror film Slumber Party. He is currently working on his first novel A Dark and Secret Place set to be released in late 2019. Favorite Films: Taxi Driver, Fight Club, I Saw the Devil, The Wild Bunch, Dawn of the Dead, A Clockwork Orange, Pulp Fiction, Heathers, The Monster Squad, and High Fidelity.
Aladdin (2019) South Park: The Complete Twenty-Second Season (Blu-ray)