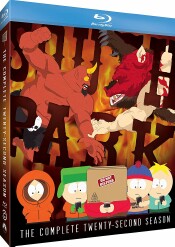 “So much has happened. I don’t know where to start. First it was all the school shootings. Then these WiFi scooters showed up. And now we know that Manbearpig is real and we could all be dead in a matter of years.”

That’s true, but I suspect that when we are all dead and gone there will be two things we can count on continuing beyond the end of human civilization. The cockroaches will inherit the world, and they will all be watching South Park, the only television show still running. It’s already been 22 years, and doesn’t it feel like 50? I don’t mean that in a mean way. I love South Park, but I’m starting to find it hard to remember what life was like without it. I’m convinced it will survive us all, and AI versions of Parker and Stone will be producing it until the planet is finally vaporized… and I’m not sure even that will stop this show.

It’s apparent that the guys on top would understand what I’m saying here. The 22nd season had a somewhat unique PR campaign. They started the #Cancelsouthpark movement, and before long it was all over the place. You’ll find it after each episode.

This season the idea of common threads appears to continue. It all starts with a rash of school shootings at South Park Elementary, but the population is pretty much ignoring the events. The kids argue about a math problem with their teacher as gunfire erupts throughout the school. The only one who seems upset is Sharon, and everyone assumes it’s just menopause. These shootings continue throughout the season with Cartman and Kenny being suspected of shooting kids, but the carnage is really the result of the appearance of Manbearpig and… Al Gore.

The season is very much a reflective one. It might fool some of you into thinking that the show really is winding down. Lots of old favorite characters that we haven’t seen for a long time make appearances. We get to see Jimbo and Ned. Mr. Hankey, The Christmas Poo has his own episode where he gets fired from the Christmas Pageant because he won’t take a cut budget. Towely shows up when the Marsh family move out of the city to start a pot farm called Tegridy. Again this plays throughout the season, and it all intertwines considerably, but they still feel more like standalone episodes. I think the guys finally found a balance that should work going forward.

The final two episodes find South Park becoming a “company” town because Amazon selected them for that fulfillment center that ended up going to New York before politicians in the area pretty much ran them out of town with their 100,000 jobs. When a worker gets hurt by one of the company’s machines, a strike brings the fulfillment of packages to a stop. It’s a clever double use of the idea of a fulfillment center, and Randy’s pot ends up filling the void. Amazon’s Jim Bazos is depicted as one of the aliens from Star Trek’s unaired pilot and later 2-part episode, Menagerie. All in all this might just be the most clever season in years.

That doesn’t mean the season doesn’t have a small share of duds. PC Principal and Vice-Principal Strong Woman end up having five kids who turn out to be PC babies who throw a tantrum at any talk or notions that aren’t PC. While I applaud these guys for exposing just how crazy the PC movement has become, it’s one of their most annoying inventions, and they admit as much in the mini-commentaries but threaten to do a spin-off season of just PC Babies. Now that’s a good way to get cancelled.

“We live in a world of many distractions. It’s hard to find peace. In the hustle and bustle of our modern times, we’ve lost the one thing we all need. More quality time with our cell phones.”

One of my favorite episodes of the season is Buddha Box. Cartman has anxiety, and it turns out the solution is to be isolated with your cell phone. As one of the few humans who inhabit this planet without a cell phone, I get this one to the core. Soon everyone has a box over their head so they can be isolated with their phones to keep them from getting stressed out. It’s brilliant … if it weren’t already kind of happening.

Stone and Parker are back with their “commentary minis”

Deleted Scenes: (8:15) There are some from various episodes and contain spoilers on the episodes on the second disc. This shouldn’t be on the first disc. Some are merely animated storyboards.

South Park has become somewhat of an institution. I don’t think it has the popularity it once did, but it remains a huge part of the pop culture. With Season 22, I don’t see a series limping to the finish line. I see a show that has sprouted new legs and is ready for another few miles down the road. And “I think that’s swell.”

Gino Sassani is a member of the Southeastern Film Critic's Association (SEFCA). He is a film and television critic based in Tampa, Florida. He's also the Senior Editor here at Upcomingdiscs. Gino started reviewing films in the early 1990's as a segment of his local television show Focus. He's an award-winning recording artist for Omega Records. Gino is currently working on his 8th album Merchants & Mercenaries. Gino took over Upcomingdiscs Dec 1, 2008. He works out of a home theater he calls The Reel World. Favorite films: The Godfather, The Godfather Part II, The Body Snatcher (Val Lewton film with Karloff and Lugosi, not the pod people film), Unforgiven, Gladiator, The Lion King, Jaws, Son Of Frankenstein, The Good, The Bad And The Ugly, and Monsters, Inc.
A Dark Place(Blu-ray) Ma