Posted in: Disc Reviews by Brent Lorentson on July 19th, 2019 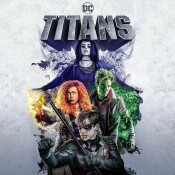 Warner Brothers has done an impressive job when it comes to their live-action DC Universe television shows. Arrow, The Flash, and Legends of Tomorrow have been fun, entertaining experiences. Now with them starting up their own streaming service, they have upped the ante by releasing Titans.  When I first heard about this one I wasn’t sure what to think, considering I wasn’t much of a fan of the animated series, but I’m so glad I came into this show with an open mind, because this show is jam-packed with coolness.  Since this was made for a streaming service and not broadcast television, not only do we get superheroes dropping F-bombs, but we get some edgier storytelling along with some violent action you may not expect.  Seriously, this one is not for the kids. The show introduces us to Dick Grayson, aka Robin ( Brenton Thwaites) a year after he has fled Gotham City and has moved to Detroit to become a detective.  It doesn’t take long before we find out he’s made the move from being Batman’s sidekick because he’s started to develop a taste for dispensing violence and is worried about what he could become.  Don’t worry; he’s still down for inflicting some vigilante justice, but we see it comes at a price over the course of the season.  It’s not long before he meets a young girl, Rachel Roth (Teagan Croft), who has some dark supernatural powers that are drawing some negative attention her way which eventually leads her to Dick.  The heart of the show is about these two orphans at different stages in their life. Dick is attempting to step out into the world and make a name for himself, while Rachel is alone and in desperate need of help.  There is some nice chemistry between these two as we see them develop a sort of brother-sister relationship, and it’s the strength of this bond that makes it easy to want to invest our time in these characters.

We also get to meet Kory Anders, aka Starfire (Anna Diop), who has powers of her own but has lost her memory, though she has reason to believe Rachel is the key to getting back her memories.  Along the way we also meet Gar Logan, aka Beast Boy (Ryan Potter), who has a gift for turning into any animal (though we only see him as a tiger), and he develops his own unique relationship with Rachel.  The four together make up the core group of the Titans, though there are plenty of other characters who weave their way in and out of the storyline.

It’s a little difficult to say exactly who or what the big bad of the season is, because there are some fun twists and turns along the way.  To a degree you could say the four are their own worst enemies, as it seems a good portion of the first season seems to be about each of them coming to terms with who they are and figuring out where they belong, whether on their own or their dynamic in the group.  In the front half of the show the bad guys are a “family” of programmed psychopaths. Despite their Leave it to Beaver appearances, they are a lethal crew and are fun to watch. I wish we got more of this family, but there are plenty of worthy foes ahead for the Titans.

What is so much fun about this show are the character appearances that pop in and out of the show.  In the first half of the season we are introduced to the Doom Patrol, which was a smart move on WB’s part considering Doom Patrol is also getting their own series. But that’s not all; we get to meet the vigilante duo of Hawk and Dove, where we get to enjoy their relationship in some standalone episodes, but we also get to meet Jason Todd (the new Robin) and some other surprises along the way.

Another unique aspect about the show is that it juggles a couple of genres, but what is a bit surprising is the horror element that is here.  While I don’t want to give too much away, there is definitely a paranormal aspect to the show along with the creepy scientists.  There are elements later in the season that build on the horror aspect, and it’s what makes this feel different from previous superhero shows we’ve seen before.

The balance between the story and action is enough to keep you watching and makes this a show that is easy to binge over the course of a weekend.  For those who are familiar with the characters, there is a lot of fan service going on here. The interactions between Dick Grayson and Jason Todd are just part of the fun.  And if you were expecting Robin to just be the silly lame sidekick we’re used to seeing, think again; he has some solid fight scenes over the course of the show.  One other aspect I really enjoyed about this take on the character: we get to see him as a detective, which is great considering he would have trained under one of the greatest fictional detectives, though we never get to see this side of the caped crusaders.

Then there’s the pink elephant in the room, Batman and Grayson’s relationship. *mild spoiler* There is an appearance from the Batman, and this is something that I equally loved and was frustrated with.  I absolutely love what they do with these characters, and what makes it work is that we get to see something we’ve definitely never seen done before with these characters in live action form.  The problem is it comes at a time where it throws off the momentum of the story we’ve been following from the start.  This is kind of a trend with the show, like when we see Hawk and Dove, we are immersed in these characters, and it just becomes a different show, ignoring the key storylines we’ve been following.  I understand that this is the first season and we are getting characters that are setting up for the bigger picture, but it’s just a bit jarring, despite how much fun it may be.

I know this is only the start, as this season is planting seeds for things to come. I’m excited for where the season finale leaves us hanging.  This first season is only 11 episodes, but there is a lot of action and story crammed into these episodes.  I’m already looking forward to what Season Two has in store for us.  By the way, be sure to watch past the credits of the final episode for a fun little stinger that teases what’s to come in the series.

Titans is presented in the aspect ratio 2.40:1.  The 1080p image is arrived at with an AVC MPEG-4 codec and averages from 18-32mbps.  The show has kind of a washed-out, dirty look to it that fits the aesthetic they are going for.  Considering the show takes place from Detroit to Chicago and Gotham City, we are not given nice pristine vistas, but instead we get a lot of smog-filled skylines and dark and grimy alleyways.  We get enough light and color separation where we can see what is going on in the fight scenes, but when the CGI effects are added, they seem to be more obvious.  Explosions and fire sequences are where this suffers the most, but really, there were no compression issues that I could see.  Skin tones seem a bit lighter, but considering these are vigilantes doing their dirty work at night, this could easily be ignored.

The DTS HD-Master Audio 5.1 track kicks in nicely when the show’s theme kicks in. A lot of bass, and it just helps set the tone.  The fight scenes sound great, everything from gunfire to objects passing through the air to simple impacts help with the immersion here.  The dialog is crisp throughout.  Really, for a television show, this is a really nice mix.

There are 13 short featurettes on Disc 2; unfortunately there isn’t a “Play All” option.  Each featurette is a little over two minutes, and they mostly discuss the characters in the show.

This is one of those shows where if you are a fan of the DC universe, I feel you’ll have a blast with this show, though if you have young kids I’d watch a couple episodes before deciding on letting them watch or not, because this show is dark, and it can get gruesome.  For those who have been waiting for DC to have a show on the same level as Daredevil, this is the show that delivers.

Brent Lorentson is a horror writer and film critic based out of Tampa, Florida. With a BA in Digital Film, he co-wrote and co-directed Scavenger Hunt. His short stories have appeared in various horror anthologies. In 2019 his short script Fertile Blood will be a part of the anthology horror film Slumber Party. He is currently working on his first novel A Dark and Secret Place set to be released in late 2019. Favorite Films: Taxi Driver, Fight Club, I Saw the Devil, The Wild Bunch, Dawn of the Dead, A Clockwork Orange, Pulp Fiction, Heathers, The Monster Squad, and High Fidelity.
Criminal Minds: The Fourteenth Season Breakthrough (UHD Blu-ray) (4K)