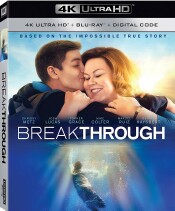 A good time to praise the lord just as many others have in the movie Breakthrough. A beautiful true story of young John, who fought for his life and the miracle brought through his belief in Christ. This movie shows the amazing things you can be blessed with with prayer and faith. Get ready to laugh and smile, but be prepared to cry your heart out with sweet tears. I suggest bringing tissues with you; bring a lot. Young John (Marcel Ruiz) was an orphan since he was an infant. He never knew his mother and always wondered why she gave him up. As a five-month-old baby he was adopted by a loving family, the Smiths. The Smiths, Joyce and Brian, are a very religious family. Joyce runs a bible study, and John is in a Christian school Living Word Christian School in his hometown of St. Charles. John plays basketball at his school, and he’s a very good player, even though the film shows he acted up quite a bit. John doesn’t do assignments, starts fights with others, and doesn’t really care too much about school. John hasn’t given himself to the lord as his adopted parents wish he would. He didn’t really believed in our lord and savior, until the lord shed the light upon John and saved him from the grave.

In the story of John Smith, we find him near death and in a predicament of hopeless recovery.  As you’ll see in the trailer, John and his two other friends went out on the town’s lake, which was visibly iced over, but after a game of tag on it, that’s where the tragedy begins. They were running on thin ice, figuratively and literally. When the ice cracks, John along with two of his other friends fall through. The other two boys are able to fight their way back up, but John is not able. As hard as he tries, he keeps sinking.

The 14 year old boy after drowning for 25 minutes comes back to life after being pronounced brain dead, and it’s amazing, a miracle. It’s a work of fate or God’s gift to John, but either way the film goes on from there to show what the young teen goes through.

The characters were depicted beyond great. The emotions of the mother and friends just leave me at a loss for words; wow. The character of Joyce Smith (Chrissy Metz) showed the full effect of mourning and faith in her adopted son. Pastor Jason Noble (Topher Grace) was pretty cold towards Joyce in the beginning. But sitting in the hospital room with John and Joyce, his actions show the utmost respect for the two. Pastor Noble broke through the barrier of the distaste Joyce felt and repaired a relationship between him and his followers.

Breakthrough is presented in an aspect ratio of 2.39:1. The ultra-high-definition 2160p image is arrived at by an HEVC codec with an impressive average bitrate of 65-70 mbps. While shot on video, the movie has a native 3.4K source. So this is pretty close to a native 4K film. What you see most remarkably here is that colors and textures don’t necessarily pop, but they look flawlessly reference throughout and quite natural. The exterior shots are appropriately colder, and the white ice and snow landscape offers clean whites with no digital noise or video distortion and absolutely no shimmer. Black levels are average, but the material doesn’t really require outstanding shadow definition here. Detail is above average and contributes to the natural appearance that dominates this ultra-high-definition image presentation.

The DTS-HD Master Audio 7.1 is again very natural. The surrounds aren’t particularly aggressive, but they are carefully constructed to allow you a pretty solid feeling of space and place. The music at the large church gatherings offers some of the more dynamic range of this audio presentation. The hospital scenes are purposefully intimate and quiet. The score never intrudes and the audio is obviously intended to bring out the peaceful and contemplative nature of the town’s prayers and faith. Dialog cuts through even during these quiet moments, and some of the delivery accounts for the emotional heart of the film.

There is an Audio Commentary with producer DeVon Franklin and director Roxann Dawson. The track is informative but not necessarily lively. It’s very conversational, and I like that it’s not being played out as mere showmanship.

Deleted Scene: (3:41) This is mostly another musical performance at the church that takes place before the salute to the first responders.

A Tapestry Of Miracles – Making Breakthrough: (25:31) This feature focuses on the actual participants for the first segment. They tell us a bit about the real story and offer their thoughts on elements of the film. This behind-the-scenes feature touches upon the cast, story, and music of the film. I thought it was strange that Franklin talks about being true to the music “of that era”. It was filmed just three years later. This isn’t exactly a period piece.

Trapped In Icy Water: (6:05) This is a documentary short that uses news footage from the event as well as the 911 audio of the accident. The participants offer up the usual documentary moments.

Breakthrough is a beautiful, heartfelt family story that is guaranteed to make you cry. This is the first Fox film to be distributed by Disney with the purchase of Fox by The Mouse House. It’s the first 4K by the new combined studios.

John Delia has been on all sides of the movie business from publicity, writing for publications and on line blogs, script writing, to film making. Writer, critic, film editor he has worked as a film critic on this second go around for 14 years. He earned his Bachelor’s degree at the college of Journalism and Communications at the University of Florida in Gainesville, Florida. John is an active member of the Southeastern Film Critics Association (SEFCA) . Favorite Films: Lord of the Rings/Hobbit trilogies, The Godfather trilogy, the Indiana Jones trilogy (I didn't like the 4th), The Avengers and for TV it's Game of Thrones. As for animation it's a tie between anything Pixar and everything Hayao Miyazaki.
Titans: The Complete First Season (Blu-ray) Missing Link (Blu-ray)