Posted in: Disc Reviews by Gino Sassani on August 21st, 2019 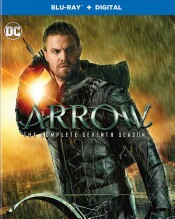 “My name is Oliver Queen. After six years of being a vigilante, the only way to achieve my goal and save my city was to confess to being The Green Arrow. Now my family and friends must carry on my mission without me. I am no longer a hero. I am inmate 4587.”

Who the heck is this Green Arrow of whom you speak? If that’s your first question, you need to go back a couple of grades and catch up with the rest of us. The comics are good place to begin, but the television universe is its own place and not tied so tightly to the DC comic book universe. Your best place to go to catch up would be the first six seasons. It’ll be worth the effort, and I can get you started with those reviews found here. This review will not contain spoilers from the seventh season but very well must contain some from the previous year. So if you’re not caught up, do that first.

This season begins with Oliver (Amell) in prison. He cut a deal with the feds. They will hunt down Ricardo Diaz (Acevedo) and help to protect his family if he turns himself in. The deal also gives Team Arrow immunity from their past activities if everyone abides by the deal. But no one got Diaz to agree to the terms. This year he’s an even more dangerous guy. He’s taking some wicked drugs that make him stronger and full of even more rage. He also has a posse of assassins from The Long Bowmen. They include Silencer (Edwards). She can create a dampening field that kills all sound. That means the old Canary cry can’t work. Brick (Jones) is an unstoppable force of brute strength. Red Dart (Elissa) fires spines she produces that can carry poison or just act like sharp deadly projectiles. There’s even a Captain America rip-off with a pointy shield. Needless to say, the family is not safe, and Felicity decides to fight back.

For the first third of the season we have three stories going on at the same time. We see Oliver’s life in prison, where he must work his way to the prison’s worst level in order to find the person who might be pulling Diaz’s strings. He’s also frustrated that his family continues to be in danger. The second story, of course is Felicity (Rickards) and Oliver’s son William (Moore) trying to avoid getting killed. We also catch up with the rest of Team Arrow. Dinah (Harkavy) is now the captain of the SCPD and trying to follow the rules. Curtis (Kellum) is working with John Diggle (Ramsey) at A.R.G.U.S. (DC’s version of S.H.I.E.L.D.). Rene (Gonzales) is trying to care for his daughter Zoe (Faria) and helping local kids learn to defend themselves at his local gym. Laurel (Cassidy) is trying not to become her Black Canary persona and works to get Oliver out of prison.

The third is a big change for the series. After the fifth season the show’s formula of flashing back five years was no longer a viable option. Each season since has focused on a particular story in the past, present, or future. This time we flash forward to Star City in 2046, where a new group finds each other to fight a threat in that time. It starts with an adult William (Lewis), who finds Roy Harper (Haynes). They follow a hidden message left by the presumed dead Felicity. It leads them to an adult Zoe (Sixtos) and an adult Mia (McNamara), who is the daughter of Oliver and Felicity. They team up with an older Dinah and Rene to stop one of those master plots. They must do this in a rather dystopian future that blames its wreckage on the age of vigilantes. There is even an entire episode set in this time. It’s obvious that there might have at least been some consideration of making this group a spin-off, a sort of next generation of Arrow with the show itself entering into an abbreviated 10-episode eighth and final season. Those considerations might yet still be in the works.

Another huge element this season is the arrival of a new Green Arrow. It takes a few episodes to learn that it’s an unknown half-sister of Oliver’s named Emiko (Shimooka). If you think I just laid a really big spoiler on you, I didn’t. Her identity is given away in an episode title, and the real drama isn’t who she is, but rather Oliver’s attempts to reach her and their rather complicated relationship.

There is a three-part crossover that involves Arrow, The Flash, and Supergirl. Once again I applaud the folks at Warner Home Entertainment for including all three episodes in each of the show’s home video releases. That was not always the case, and shows were released out of order of these episodes, making it difficult to see the entire story in order, if at all. They are all included here. This year’s is used to actually set up two future big events for the DC television universe, also known as the Arrowverse. There was a directive from the beginning that all things Batman and Gotham can’t even be mentioned. That restriction had to do with Fox showing the series Gotham. Now that the series has ended, these shows are free to integrate those elements into their shows, and so this season you’ll hear Bruce Wayne and Gotham mentioned often. It’s like the writers are kids finally let loose in the candy store. The crossover introduces us to Ruby Rose and her Batwoman character. She’ll be getting her own series next season. The crossover also sets up an epic one for next year that will take up five hours of television. It’s what Arrow’s seventh season is really all about, and you’ll see it teased here. I won’t tell you anything about that story, because you’ll want to see that for yourself. But we finally see this reality’s version of Gotham City. The event also introduces us to The Monitor, and he’ll be having a big part in the finale of Arrow and next year’s super crossover (pun intended). If you watch nothing else to prepare for the coming season, you must watch the crossover event.

A pattern for these shows has always been a sort of split season. The bad guy in the first half almost always ends up being the opening act for an even bigger threat. The tease is that this season’s big bad will be a villain named Dante. But you can expect some huge surprises around all of that. Again, I won’t delve into specifics here. As Stan Lee used to say: “That would be telling.” OK, wrong company, but Stan would be proud to learn that Marvel Comics exist in this universe, as Spider-Man is mentioned several times including a character quoting the famous Uncle Ben line. You know, with great responsibility… It will not be until the final six episodes that the real villains are revealed, fought, and brought down. There will be the expected great cost, and the season finale is a bit of an emotional moment that sets up next year’s series finale. Emily Brett Rickards won’t be back next season, and Stephen Amell will likely be limited. It should make for an interesting last 10 episodes, because that’s all you’re getting next season, and likely two will be a part of the big Crisis crossover.

We get a few really neat distractions from the heavy story itself. One episode plays out like a documentary on vigilantes as a camera crew follow Oliver’s team, who end up deputized and working with the police. It’s a nice episode and concept that carries through the show. Of course, there will be tension between two very different ways of doing things. I’ve already mentioned an episode that plays out entirely in the flash-forward time of the season.

Each episode is presented in its original aspect ratio of 1.78:1. The 1080p image is arrived at with an AVC MPEG-4 codec. Black levels are absolutely vital in this high-definition image presentation. So much of the action happens on rainy nights and in the shadows. Fortunately there’s solid shadow definition here, or this could well be a bloody mess to try to make out. When colors need to stand out, they do. Look more for contrast and textures to replace shiny surfaces. There is a nice image element to signal when we’re in the future. The colors are greatly muted, and a very cold, blue pale dominates those images.

The Best Of DCTV Comic-Con Panels At San Diego 2018: (1:00:59) Instead of the usual panels on each release, this is a compilation of all four in one feature.

Inside The Crossover – Elseworlds: (45:01) This feature has two elements. We get a panel with the executive producers of each show, including the upcoming Batwoman series. They talk about how they each work to integrate these crossovers. We also get a nice history of the Elseworlds line of comics. These are very much like Marvel’s What If… line. They take a question where one thing changes and show us how that would change the familiar stories.

In a world where many of you out there stream instead of buying discs, you might be asking the question: why buy these Blu-rays? There are so many reasons. I don’t know how you guys watch stuff on five-inch screens. Secondly, we’ve already seen license deals change, which could cause you to lose your favorite shows. The discs you keep forever, and there’s no need for your internet connection to be up. But shows like Arrow give you an entire different reason to buy the discs. Shows like this are loaded with Easter eggs and little hidden details that are hard enough to spot on a huge screen and perhaps impossible on your phone. The ability to go back easily is another good reason. It’s enough reason for me. Owning the discs is a must. It also allows me to share this info with you. For the foreseeable future, this will remain how I watch television shows. “I’ve always done what I had to do. Right now this is what I have to do.”

Gino Sassani is a member of the Southeastern Film Critic's Association (SEFCA). He is a film and television critic based in Tampa, Florida. He's also the Senior Editor here at Upcomingdiscs. Gino started reviewing films in the early 1990's as a segment of his local television show Focus. He's an award-winning recording artist for Omega Records. Gino is currently working on his 8th album Merchants & Mercenaries. Gino took over Upcomingdiscs Dec 1, 2008. He works out of a home theater he calls The Reel World. Favorite films: The Godfather, The Godfather Part II, The Body Snatcher (Val Lewton film with Karloff and Lugosi, not the pod people film), Unforgiven, Gladiator, The Lion King, Jaws, Son Of Frankenstein, The Good, The Bad And The Ugly, and Monsters, Inc.
I Love Lucy: Colorized Collection Avengers: Endgame (UHD Blu-ray) (4K)