Posted in: Disc Reviews by Brent Lorentson on October 11th, 2019 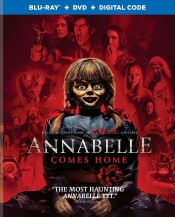 The Conjuring franchise and its spin-offs have been a success at the box office since 2013.  Now with the third Annabelle hitting the big screen, it’s time ask the question: is this the end for the franchise?  We already know there is going to be a third Conjuring film coming out next year, but beyond that, I’m guessing the studio heads are watching to see how this film fares with the summer competition.  I wasn’t a fan of the first Annabelle. The second one was better, but still it seemed to pale in comparison to The Conjuring films, so to be honest, my expectations were not very high for this new installment.  As it turns out, this ended up being my favorite of the spin-off movies, and I have no shame admitting how much fun I had with this one.

First off let me just state that I love The Conjuring films. Personally they are in my top ten for paranormal films. I’m a sucker for the cinematic Warren family, and I’m a fan of their work, Whether you believe in it or not, they make for good stories.  I feel this is important to get out there, because while I had a blast with this film, I can’t put it in the same sandbox.  Annabelle Comes Home works because it knows what it is: a B-movie carnival ride, and it embraces it.  This isn’t a dig by any means; instead, it’s a compliment.

Bringing the doll to the Warrens’ home is something that should have happened in the films from the start.  I also think we can all agree we’ve wanted more time in their haunted artifacts room from the moment we first got a glimpse of it.  But to take it all a step further and play the “what if” card and pose the question, “what would happen if all the cursed objects were to escape” is a fun notion.  I mean, think about that moment in Ghostbusters when the containment facility it shut down and all the ghosts escape into New York, It’s the same thing that basically happens in Annabelle Comes Home, but on a smaller and more intimate scale.

The film opens up with Ed (Patrick Wilson) and Lorraine (Vera Farmiga) Warren receiving the doll and taking it back to their home to have it locked up in their museum.  On their way home they have a bit of car trouble that may or may not be paranormal-related, but as the sequence unfolds, Loraine discovers that the doll is a beacon for the dead.  We also get to meet their daughter, Judy (Mckenna Grace) who is developing psychic abilities like her mother.

As it turns out, Ed and Lorraine are called away for an investigation, which leaves Judy alone at the house with Mary Ellen (Madison Iseman), her babysitter.  At school Judy is having a tough time and is losing friends because word is spreading about what her parents do, and the kids are treating Judy like she’s the weird kid at school.  Though when Mary Ellen’s best friend Daniela (Katie Sarife) finds out she is babysitting the Warrens’ daughter for the weekend, she takes the opportunity come to the house and see if it’s as spooky as it’s been made out to be. Really, this is all kind of the standard setup for a horror film, but what makes this actually entertaining is the chemistry between the three girls. So when things inevitably go wrong, we really have a reason to root for these girls.

As for those who are fans of the Warrens and their real-life case files, well, you’re in for an added treat, as we get more than just a glimpse at these haunted items in action.  Even the famous rocking chair that was unveiled at the Haunted Museum in Las Vegas just weeks ago makes an appearance here.  As for how all the objects are unleashed upon the home and how Annabelle comes into play, well, as horror movies go, this isn’t so farfetched as far as how it begins…as for the rest, well, obviously there are plenty of liberties taken.

What works best is that the film doesn’t stray from the house once things get rolling, and everything occurs in one night, so there is a sense of urgency that remains and only ramps up as the film progresses.  Sure, most of the jump scares are obvious, but I liked the carnival funhouse vibe this film has where no room is safe, and what’s lurking outside is even more dangerous than what is inside.

The writing this go around is much better than what we’ve seen in the spin-offs.  At its core it’s the relationship with the girls that keeps this story grounded and helps us sympathize with them.  I could have done without the tad-bit-forced romantic aspect between Mary Ellen and a neighbor boy, but thankfully this is a storyline that is kept more in the background.

One of the best things going for this film is also its atmosphere. While the caliber of direction isn’t quite on par with James Wan, there are still plenty of stylish atmospheric moments that seem to blend in better with The Conjuring films than what we’ve seen before.

I know some would like to think that this will be the end for the Annabelle franchise, but I wouldn’t be surprised if another film or two managed to conjure its way onto the screens.  I feel that now that they seem to finally have a grasp on how to use the doll for these films, there is much more potential to be made of this new cinematic icon.

Annabelle Comes Home is presented in the aspect ratio 2.40:1.  The 1080p image is arrived at with an AVC MPEG-4 codec at an average of 28 mbps.  A good portion of this film takes place at night, though through the magic of cinema there still manages to be enough light for us to see everything.  The black levels are what are most impressive here, as we are able to catch detail and depth in minimally lit shots.  There is a bluish hue to the film that at times affects the skin tones, but I feel this is for the effect when doing the lighting at night.  Even during the daytime scenes, the colors are saturated but have more earthy tones. Even with Mary Ellen in her pink top, the pink doesn’t quite pop.  Overall, though, this is a beautiful movie when it comes to atmosphere, which is what the film was aiming for. It’s nice and creepy and puts you in the autumn spirit.

The DTS HD-Master Audio 5.1 track is one that is one that fits the carnival ride atmosphere; it can go from calm to suddenly an over-the-top sound design.  It offers plenty of range where we can genuinely hear random things go bump in the home, especially in the basement sequence.  The dialog is clear, and the score is well used here to help amplify some of the more intense moments as well as other times when silence is utilized for that dreaded jump scare to follow.

Behind the Scenes: (11 minutes) This is broken up into three parts, The Ferryman/Demon, The Bloody Bride, and The Werewolf.  Each part briefly discusses the character and then jumps into the practical effects used to bring the character to life.

The Artifact Room & The Occult: (5:07) This could have been a great feature, exploring the room, but instead we get an all too brief summary about the room where the Warrens stored objects they took with them from investigations.

The Light and the Love: (4:26) A brief moment where actors and crew discuss the real-life relationship the Warrens had.

Deleted Scenes and Alternate Ending: (11:48) Really, I wish most of this stayed in, but I understand why it got cut…except for when they use the box from The Conjuring film to try to find Annabelle.  Such a short but cool stylish scene that I feel the fans of the series would have dug.  As for the alternate ending, they made the right choice by changing it.

After re-watching this, I stand by this being a fun film and the best film of the spin-offs.  It’s the time of year where if you are looking for a fun, creepy movie to put you in the Halloween spirit, this should do the trick. I feel as this film ages, it’s going to develop a cult status that is well deserved. It has it all: ghosts, creepy dolls, and a werewolf.

Brent Lorentson is a horror writer and film critic based out of Tampa, Florida. With a BA in Digital Film, he co-wrote and co-directed Scavenger Hunt. His short stories have appeared in various horror anthologies. In 2019 his short script Fertile Blood will be a part of the anthology horror film Slumber Party. He is currently working on his first novel A Dark and Secret Place set to be released in late 2019. Favorite Films: Taxi Driver, Fight Club, I Saw the Devil, The Wild Bunch, Dawn of the Dead, A Clockwork Orange, Pulp Fiction, Heathers, The Monster Squad, and High Fidelity.
“31 Nights Of Terror” Contest: Win Tell Me A Story The Complete First Season On DVD From CBS “31 Nights Of Terror” Child’s Play (2019)