Posted in: Disc Reviews by Gino Sassani on October 15th, 2019 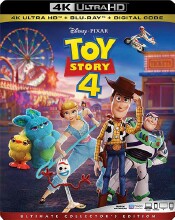 “You know, kids lose their toys every day. Sometimes they get put in the wrong box, and that box gets taken away.”

In 1995 Pixar didn’t just put themselves on the computer animated feature film map. They completely created a new map. Yes, there were works before Toy Story, but that was the film that changed everything in an entire industry. It also began a push-and-pull relationship between the independent studio and its distribution partner, Walt Disney Studios. It was a disagreement over Toy Story sequels that found Pixar shopping for a new partner for their future output, and before you know it, Disney wrote a check and Pixar was a part of Disney. The small studio’s chief, John Lassiter, ended up in charge of the Mouse House animation department, and those disputed Toy Story sequels became box office gold and examples of the right way to continue a film franchise. Now, a lot’s changed in that 25 year interval. John Lassiter is gone because of his penchant for “full body hugs”, and Disney has perfected the model of writing a check and turning it into a virtual printing press printing out hundred-dollar bills like they were prom flyers. Marvel, Lucasfilm, and now Fox have fallen like dominoes in the Disney march to global domination of the entertainment industry. It’s actually amazing how many times they’ve gotten it right. The Marvel films represent one of the strongest collections of franchise films in movie history. The Star Wars films might have been hit-or-miss, but even the misses printed out money. It’s gotten to the point where, in the Disney Empire, a worldwide haul of a half a billion bucks is considered a failure. And now we come to the fourth installment in the beloved Toy Story journey, and I have to say the film packs as much heart as the original did 25 years ago.

The film begins nine years earlier when the gang of toys was still owned by college-bound Andy. Woody (Hanks) is emotionally crushed when Andy’s sister Molly gives up her Little Bo Peep lamp and the accompanying Bo Peep (Potts). She was the love of Woody’s life, and he has had to learn to deal with the loss. Returning to the present, the toys are now owned by Bonnie (McGraw), and she’s started to neglect Woody, who finds himself relegated to the closet during playtimes. Woody is sad once again and sees his chance to be the savior toy when Bonnie has to go to kindergarten orientation. She’s scared and insecure, so Woody stows away in her backpack to be there when she’s feeling bad. In the process, he unwittingly helps her to make a new friend. And we’re talking literally making a new friend. No, she hasn’t teamed up with Colin Clive to create a monster with a little bodysnatching and lightning. She uses supplies gathered by Woody to make a new toy out of a spork and a few other trash items and names the newborn toy Forky (Hale). When he sees how much Bonnie loves her new pal, he’s conflicted between helping Forky adapt to his new “life” and the realization he’s helping his own replacement in Bonnie’s heart. That means embarking on a daring rescue mission when the confused Forky ditches the family RV on the clan’s pre-school cross-country vacation trip.

The rescue attempt leads him to an antique store where he finds more than Forky. There’s a lamp in the window and it looks a lot like the Little Bo Peep lantern, and he finds that Bo Peep has been living in the small country town as a “lost” toy on her own with a group of friends that make kids happy at places like carnivals and playgrounds. The group includes an Evil Knievel-like Duke Kaboom, voiced by Keanu Reeves, Giggle McDimples (Maki), a small police officer with a full playset, and a group of action figures called Combat Carl, voiced by Carl Weathers. Woody also encounters Gabby Gabby, voiced by Christina Hendricks. Gabby is a very old doll who has a broken voice box and is trapped inside the antique shop because no one wants her. She has a group of henchman ventriloquist dolls that end up trying to grab Woody for his pristine voice box. Of course adventures ensue and many lessons are learned, primarily Woody’s decision to help get Forky home because he loves Bonnie.

Woody pulls at your heartstrings like never before, while most of the usual gang of Andy/Bonnie toys are pretty much background material here with surprisingly little screen time. While Woody steals your heart, Forky steals the show. I was quite wary about this character after watching the trailers, but you’ll be amazed at how real he actually becomes, and before you know it, you love him as much as Bonnie does. The group also encounters two stuffed animals sewn together like Siamese twins. Bunny, voiced by Jordan Peele, and Ducky, voiced by Keegan Michael-Key, are also brilliant new additions to the family, even if the Bunny character ends up a little too much like The Secret Life Of Pets’ Snowball character, voiced by Kevin Hart. Bunny is much less annoying but often blurs the lines between those two very different franchise’s manic goofballs. Here it continues to astonish me how well each new and old character mesh together. It’s one of the most important elements of the franchise. Adding new characters to a film series, particularly one as loved as Toy Story, can be very tricky. It doesn’t take much to upset what is really a delicate balance of chemistry. Somehow these films continue to find just the right notes to continue the symphony. And speaking of a symphony, all of the classic Randy Newman material is here, including the iconic You’ve Got A Friend In Me along with some new stuff that fits the franchise just like a glove.

Toy Story 4 is presented in an aspect ratio of 2.39:1. The ultra-high-definition 2160p  image is arrived at by an HEVC codec with an impressive average bitrate of 55-60 mbps. Pixar continues to set new groundbreaking advances in the art of the computer-generated animated feature. What literally started with Toy Story has evolved into something quite remarkable. It’s nice to see this in its ultra-high-definition image presentation where you can truly appreciate all of the visual wonders to be found. Let’s start with detail where textures and elements are becoming so much more awesome with each new Pixar release. There’s an early scene where Woody is working to save another toy and he’s out in the rain. It’s dark, but the lighting is so realistic. The water beads on his hat and the effect is one of the coolest I’ve seen from this kind of a feature. Textures also come alive with the various fabrics and materials that make up these toys. Then there are the crisp, sharp images that allow for all of this texture and detail. Colors are bright and vivid when they need to be. The sights of the carnival are about as photo-realistic as you can get. Of course, I keep saying that until the next Pixar film proves that they really can get better. Black levels are deep and inky with wonderful contrast and shadow definition. One of the greatest nuances of the film is the lighting effects. Reflections and shadows help sell the complicated illusions. Light captures moments of dust and other organic elements. The warm lighting of the antique store sells the atmosphere completely.

The Atmos track defaults to a pretty solid 7.1 mix. Of course dialog is going to be front and center. There are a couple of Randy Newman songs that play out as dynamic as any CD presentation. There are some nice surrounds, particularly in the carnival environments. Subs add just the right touches to create depth and space to everything from score to dialog.

The extras are all on the Blu-ray bonus disc. There are three discs in all. There’s the UHD and Blu-ray film discs and the separate bonus Blu-ray.

Deleted Scenes: (28:00) There are six with a handy play-all option and an optional introduction from the director. There’s a ton of stuff here that explores alternate stories and added elements that just didn’t make the final story cut. They are brought to you basically as animated storyboards.

Let’s Ride With Ally Maki: (5:41) The actress takes us into the recording studio where she’s doing her voice acting, but this is more than that. She is introduced to the people who handle all aspects of the dialog process. It’s always nice to meet the relatively unsung heroes on a production.

Woody & Buzz: (3:35) We get a rundown of the important story beats and how the are perceived by the two star characters. Tom Hanks and Tim Allen add some nice insights to the whole picture being presented here.

Anatomy Of A Scene – Playground: (9:30) A handful of the crew watch the playground scene from a viewing theater where they offer insights much like you might get from a commentary track. There are also behind-the-scenes elements like storyboards and conceptual art.

Toy Views – Carnival & View From The Roof: (1:29) These are short little camera pans that basically offer a toy’s eye view of these two environments.

Toy Box: (13:00) Here you get character profiles. There are five (Gabby Gabby and her gang, Forky, Duke Kaboom, Ducky and Bunny, and our short little pet policewoman).

I will warn you that the ending is a tear-jerker moment that not everyone in our screening agreed with. Without giving it away, I’ll say that I saw it coming, because it was honestly the only reason to make a fourth film. These movies respect the evolution of situations that are a huge part of growing up. I know I’ve had incredible fondness for certain toys, and all of this changed over time. The series hits that stride perfectly. The ending was inevitable and would have been a cheat if it went any other way. Like Woody, you’ll have to learn to live with loss. That loss is equally felt with the death of Don Rickles before the film began. His character is in the film, and his voice, obviously from other moments, was sparingly provided so that the Mr. Potato Head is in the film. A nice tribute is offered as the film’s closing credits begin. This is also the last Pixar film with any involvement from John Lassiter. I understand he didn’t quite molest anyone, but we have a relative who also gives these “full body hugs”, and honestly it’s a creepy thing to witness. I can imagine why some women might feel uncomfortable with these things. They kind of make my skin crawl. So a lot of chapters in the Toy Story and Pixar landscape are changing, and it’s rather nicely reflected in this movie. It brought back a ton of emotions and memories that started in 1995 with an unlikely film called Toy Story. “Those were the days.”

Gino Sassani is a member of the Southeastern Film Critic's Association (SEFCA). He is a film and television critic based in Tampa, Florida. He's also the Senior Editor here at Upcomingdiscs. Gino started reviewing films in the early 1990's as a segment of his local television show Focus. He's an award-winning recording artist for Omega Records. Gino is currently working on his 8th album Merchants & Mercenaries. Gino took over Upcomingdiscs Dec 1, 2008. He works out of a home theater he calls The Reel World. Favorite films: The Godfather, The Godfather Part II, The Body Snatcher (Val Lewton film with Karloff and Lugosi, not the pod people film), Unforgiven, Gladiator, The Lion King, Jaws, Son Of Frankenstein, The Good, The Bad And The Ugly, and Monsters, Inc.
Light of My Life (Blu-ray) Contest: Win Satanic Panic On DVD From RLJE Films