“31 Nights Of Terror” The Haunting of Hill House: Season 1 (Blu-ray)

Posted in: Disc Reviews by Brent Lorentson on October 17th, 2019 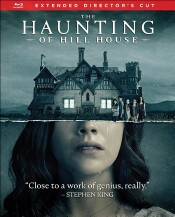 The novel The Haunting of Hill House by Shirley Jackson is certainly a literary classic, but for the sake of this review you’ll need to ignore the book and the previous film adaptations…I think it’ll be easy to forget the 1999 film The Haunting.  I say this mostly because if you go into this series expecting that story, you will be disappointed. Instead, what creator and director Mike Flanagan has delivered is a masterpiece of horror that is so good that as the season plays out it manages to outdo itself again and again up to its final episode.  When it first aired on Netflix I binged it and instantly fell in love, and when the opportunity arose to return to the series and see extended cuts of the episodes, I was more than happy to oblige.

First off, only three episodes are given the extended treatment. Steven Sees a Ghost, The Bent-Neck Lady and the last episode, Silence Lay Steadily.  Honestly, it had been a year since I last watched the show, and I didn’t recognize what was added till listening to the commentary tracks that were attached.  Does it hurt the series any by having these added scenes?  Not at all; if anything, I enjoyed it more this time around.

The show for the most part is broken up into two separate timelines. There is the NOW, where we follow the Crain family as adults, and there is the THEN, which follows the family 26 plus years into the past while they lived in Hill House. The family is made up of the father, Hugh (younger version Henry Thomas and older played by Timothy Hutton) and Olivia (Carla Gugino) as the mother of the five children Steven, Shirley, Theo, Nell, and Luke.  The casting for both the old and new versions of the Crain family is amazing, not just performance-wise, but they even look alike.

The first episode, Steven Sees a Ghost sets things up nicely as we get to meet the Crain family as they are being haunted by the ghosts in the home, while jumping ahead we meet Steven (Michiel Huisman) who is now a successful author after writing about surviving the events in Hill House and has written other paranormal books though he claims to be a skeptic. In following episodes we see that Shirley now runs a funeral home, Theo is a therapist for children, while the twins Luke and Nell are struggling in their own ways with addiction and are mentally unstable.  The first five episodes are spent focusing on each of the Crain siblings, showing us their experiences in Hill House while also catching us up to where they are now.  A large bulk of this time is also spent with them coming to terms with the passing of one of their siblings, one who made the terrible mistake to return to Hill House.  As this all unfolds there is some beautiful storytelling that is also dare I say actually even scary.  This is the kind of series you want to watch late at night with all the lights off, but don’t be surprised if you get the jitters and decide you leave a light on just to play it safe.

Touch expands the paranormal aspect of the show as it focuses on Theo (younger version Mckenna Grace, older version Kate Siegel) as we discover she is able to read people and objects with a simple touch.  This episode is filled with so much good stuff and is simply creepy all around as it shows us how it’s not just the paranormal that are creepy in this series.  Another great episode is The Bent-Neck Lady. This one focuses on the spirit that has haunted Nell from her first night living in Hill House to the present day.  As one of the extended episodes this plays almost like a mini film, and it’s a great episode that stands on its own. The F/X used to bring the Bent-Neck Lady to life are great, and this is something you can easily understand why it would traumatize a child.  What’s even better with this episode it dips its toes into the science of “night terrors” and attempts to give us an explanation for what has happened to Nell that isn’t paranormal.  This is the episode where Victoria Pedretti gets to shine as the adult Nell, and her performance managed to suck me in and genuinely sympathize with her character and all the trauma she has endured.

On a technical level, the episode Two Storms is a thing of beauty.  Shot over the course of the two timelines, the episode is shot to look like it was all done in one take.  This is easily one of my favorite episodes of all time on a technical level just for what they managed to pull off between the performances, the visual F/X, and simply being a thrilling episode. Even if you don’t typically listen to commentaries, this is one worth checking out to see how they pulled it off.

What’s most remarkable about this show is that it manages to take a very standard haunted house story and make it something so much more.  Sure, there are jump scares, but every episode has at least one moment that is genuinely unnerving and it makes you wonder just how well you would do if you were in the shoes of these characters.  Each of these characters handle their fears and traumas in very real and relatable ways, and it does make you look at hauntings with a little more empathy.

The Haunting of Hill House is presented in the aspect ratio 1.78:1.  The 1080p image is arrived at with an AVC MPEG-4 codec at an average of 28 mbps.  With the two timelines there are two distinct looks. The past has a warmer look, and the colors are a bit more vibrant (at least in comparison to the Now timeline).  For the Now timeline the colors are drab and are desaturated where really no color seems to pop.  The skin tones also fluctuate between looking natural to being pale and corpse-like. I kind of get the visual metaphor by doing this.  The textures of Hill House look great here whether it’s with all the furnishings when the Crain family lived there or when it’s rotting and decaying.

The Dolby TrueHD 5.1 track is put to work here as he handles all the dialog sequences well, but most importantly it’s the music and the ambient noise put down together with the other audio F/X that bring this together.  From the immersiveness of the hailstorm to the unnerving dog barking to the use of the bass for the thuds in the walls, this track does what is needed to add to the creep factor.

(Audio Commentary with Mike Flanagan; the commentaries are only on a handful of episodes but the amount of information he delivers is enough to keep you engaged from start to finish.  Two Storms is one of my favorite commentaries in a while.)

No real bonuses except for the three extended episodes.

I love this show, and I plan on making it a part of my yearly viewing tradition for things to watch during October.  This is easily one of my all-time favorite shows, and I’m curious to see how they will follow this season considering the plan is to treat this like an anthology series.  Honestly, I don’t think this can be topped. This season simply was so beautifully crafted by Mike Flanagan. Even though he’s still a young filmmaker, I think it would be OK to call this his crowning achievement.  This show captures the essence of horror so beautifully. It’s not in the jump scares but instead with the thoughts that haunt us in the silent darkness where our mind is in control whether we like it or not.

Brent Lorentson is a horror writer and film critic based out of Tampa, Florida. With a BA in Digital Film, he co-wrote and co-directed Scavenger Hunt. His short stories have appeared in various horror anthologies. In 2019 his short script Fertile Blood will be a part of the anthology horror film Slumber Party. He is currently working on his first novel A Dark and Secret Place set to be released in late 2019. Favorite Films: Taxi Driver, Fight Club, I Saw the Devil, The Wild Bunch, Dawn of the Dead, A Clockwork Orange, Pulp Fiction, Heathers, The Monster Squad, and High Fidelity.
Death and Return of Superman ( UHD Blu-ray) (4K) “31 Nights Of Terror” Talking With The Masters Of Horror