The Art of Racing in the Rain (Blu-ray)

Posted in: Disc Reviews by Gino Sassani on November 22nd, 2019 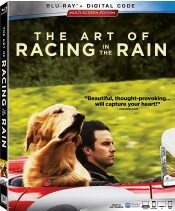 “He picked me out of a pile of pups, a tangled mass of paws and tails. He’d stopped at the farm on his way home from the speedway at Yakima. Even back then, I knew I was different than other dogs. My soul just felt more human.”

There was a time when this kind of film would have been reviewed by Baby, the German Shepherd/Chow who used to run security here at Upcomingdiscs as well as fill in for the occasional dog film review. Baby’s gone, and we haven’t yet trained Aurora the Siberian Husky who resides at Upcomingdiscs to pitch in on reviews. The problem is getting her to put her ball down long enough to pay enough attention, let alone write a review. But we’re working on it. Until then these duties have fallen back to me, the occasional dog lover, which usually depends on what Aurora is up to at any particular moment. As Baby would have said: “Let’s not talk about that right now.” The task at hand is another talking dog film which followed quickly on the heels of A Dog’s Purpose and its sequel A Dog’s Journey along with the most recent A Dog’s Way Home. It’s a trend that has produced some emotional moments at the cinema for those of us who have spent a large part of their lives with our canine companions. This time out we have The Art Of Racing In The Rain, which is based on the novel by Garth Stein. If you’re hoping to have that same kind of emotional ride that these other films brought, I think you’ll be in for a little disappointment.

Denny is played by Heroes alum Milo Ventimiglia. He’s a small-time race driver who has dreams of driving in the big time. On his way home one day he stops at a stand where they were giving away puppies and ends up taking one home. He names him Enzo after Enzo Ferrari. Through Enzo’s narration with a voice supplied by Kevin Costner, we are taken through Enzo’s life with Denny. We watch him meet Eve (Seyfried) who would become his wife and then have a daughter Zoe. From the start his in-laws don’t approve of Denny (and I know exactly how that feels). When Eve becomes sick and passes, he ends up having to fight them for custody of his daughter. They don’t play fair and even frame him for a crime to strengthen their case. All the while Denny has been balancing his growing career and eventually a chance to go to Italy and work for Ferrari. All of this is seen through the eyes of the faithful dog Enzo, who offers his own opinions of the things happening in their lives.

The biggest problem here is the character of Enzo. Kevin Costner is a horrible choice for the voice. He doesn’t really command any emotional attachment here. He’s got that kind of gruff voice that doesn’t convey the softness and love that you want so much to feel from Enzo. The written dialog doesn’t help matters either. Enzo spends too much of the time philosophizing and trying to sound more like a professor than a friend. He often lectures as if he’s teaching a philosophy class instead of making us feel closer to this family. When the dog is the weak link in a movie of this kind, it’s doomed to failure. I never read the book, so I don’t know how close this dialog is to the written word, but it doesn’t work as a film at all.

From the features we learn that the author is also a racing fan, and so the racing element is given more emotion than the dog itself, and that might have made a better focus. The title comes from Denny’s particular skills. He’s one of the best at navigating a wet track. Enzo is a constant companion at the track, which leads to the only truly captivating moment in the film, which happens to be its last. A dying Enzo is given the chance to ride in a car for the first time with Denny. They pick a 1957 classic Testarossa, and it’s the emotional moment in the entire film. It’s even better if you turn off the sound and mute Costner’s need to narrate the tender moment.

The Art Of Racing In The Rain is presented in its original aspect ratio of 1.85:1. The 1080p image is arrived at with an AVC MPEG-4 codec at an average 30-35 mbps. Colors are a bit warm and soft with interiors harboring a somewhat sickly yellow tint that might be intentional to blend in with Enzo’s fur color. I’m not sure, but it makes them look strikingly unnatural. Race scenes provide the most robust sharpness and display of color. Reds truly stand out with many of the cars. The night and rain driving has a nice bit of detail that is likely due to the 4K intermediate that was used here. Black levels are a little above average with some nice moments of shadow definition.

The DTS-HD Master Audio 7.1 is most evident when we’re at the races. The panning motion on the track can be quite immersive. The surround isn’t exactly aggressive, but it gets the job done. Subs are also a bit more alive to boost the racing elements. Dialog is fine and comes through clearly.

There’ an Audio Commentary by Simon Curtis

A Journey To Screen: (5:48) Stein, the writer, offers up his insights into the novel’s inspiration, and not surprisingly he’s more excited about the race elements than that of the dog.

Directing The Art: (5:09) A profile of director Simon Curtis.

Enzo Cam: (4:39) A look at how the cameras were placed to offer the dog point of view. They talk about how clever and unique this idea of a film from a dog’s point of view and how it hasn’t really been done before. Now I get the problem. They never saw A Dog’s Purpose or some of the other wonderful dog films over the years.

Behind The Wheel: (6:19) A look at the authenticity of the racing elements.

The Dog Stays In The Picture: (6:12) A look at working with the dogs in the shoot.

As much as anything else this is really a Pinocchio story. Enzo feels as if he has the soul of a human and wants to retain the knowledge he’s gaining as a dog so that he’ll carry it to his human life which he believes is next. The film even teases this possibility in its final scene. Unfortunately there’s so much melodrama that gets in the way of a good dog story. That’s a recipe for disaster, and that’s exactly what you get with this one. The film sputters coming out of the gate. “No race was ever won in the first corner, but plenty have been lost there.”

Gino Sassani is a member of the Southeastern Film Critic's Association (SEFCA). He is a film and television critic based in Tampa, Florida. He's also the Senior Editor here at Upcomingdiscs. Gino started reviewing films in the early 1990's as a segment of his local television show Focus. He's an award-winning recording artist for Omega Records. Gino is currently working on his 8th album Merchants & Mercenaries. Gino took over Upcomingdiscs Dec 1, 2008. He works out of a home theater he calls The Reel World. Favorite films: The Godfather, The Godfather Part II, The Body Snatcher (Val Lewton film with Karloff and Lugosi, not the pod people film), Unforgiven, Gladiator, The Lion King, Jaws, Son Of Frankenstein, The Good, The Bad And The Ugly, and Monsters, Inc.
Official Secrets Frozen II