Posted in: Disc Reviews by John Delia on February 1st, 2020 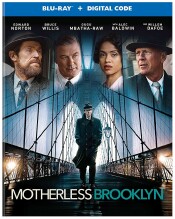 During the 1950’s, being a private investigator wasn’t always a safe and sure way to make a living. But it was a popular way to make some cash for returning soldiers or ex-police officers. During these times things were beginning to modernize, and the world was becoming more dependent on advancement in the skyline. With these changes, corruption and deceit became more evident, and private investigators became more popular. When Frank Minna’s (Bruce Willis) agency gets a chance to make some real money, things begin to get ugly fast. In his crew there is Lionel Essrog (Edward Norton), an orphan with Tourette’s syndrome that Frank took under his wing when Lionel was 13; they have been friends ever since. Then there is Tony Vermonte (Bobby Cannavale), Gilbert Coney (Ethan Suplee), and Danny Fantl (Dallas Roberts). Frank has known these guys for many years and trusts them with helping to investigate the cases for his company.

When a job goes awry, the team has to discover what went wrong and how far this assignment will actually take them. Lionel takes the initiative and starts on this case that will bring him among the very powerful and the group these power-hungry men want to take down. Following the breadcrumbs brings Lionel in many directions, but it all somehow centers on Laura.

Moses Randolph (Alec Baldwin), housing authority and member of the city council, has been changing the city to prepare it for the future. He has been accomplishing it by any means necessary, and this includes forcing people out of their homes. On the other side of the spectrum, Laura Rose (Gugu Mbatha-Raw), working for advocate and political leader Gabby Horowitz (Cherry Jones), has been doing whatever she can to try to save these homes for the residents, but somehow she is in the middle of a war that is about to begin, and her life is in danger.

Director and writer Edward Norton does a fantastic job of recreating the noir-style crime-detective films of the 50’s and 60’s.  He tells this story with complete authenticity and keeps the theme of the older style films. However, Norton creates a unique atmosphere that adds real disabilities into the mix. Edward’s portrayal of Lionel is remarkable, and he pulls off his character’s disability very well throughout the motion picture.

If you are a true crime-detective story lover, this film is for you. It pulls you into the story and pulls you in all different directions until its final conclusion that will not disappoint 40-year fans. He doesn’t dominate the film, but this is as much his story as anyone else’s.

Motherless Brooklyn is presented in its original aspect ratio of 1.85:1. The 1080p image is arrived at with an AVC MPEG-4 codec at an average 30-35 mbps. The high-definition image presentation is as much a step back in time as the story itself. The film uses great shadow moments to create an atmosphere that was popular with the film noir releases of that same age. The characters are like something out of a Mickey Spillane novel. The colors are desaturated with a lot of warm oranges and browns. There are times the colors are so subdued that there’s an almost monochromatic look to the entire palette. It’s all intentional and a perfect style choice for the film. Black levels aren’t particularly strong, but the hazy shadows are exactly what the style calls for. There’s still a ton of period detail here to be found along the streets of a bygone era New York. The detail on the vintage cars and vintage packages all help complete a solid illusion of another place and time. This is a film that would have been perfect in 4K with HDR to help with the contrast atmosphere. Alas, there so far aren’t any plans to release the film in that format.

The DTS-HD Master Audio 7.1 brings all of it alive with the riffs of a jazz trumpet laying the foundation for the entire audio presentation. The sounds bite into your ears at times, and it’s all in service to that same atmosphere I talked about earlier. Except when he’s having an attack, Norton’s character speaks in a very subdued, quiet manner that could have easily disappeared into the soundscape. Instead the audio presentation actually ebbs and flows around his dialog, which is quite an extraordinary concept that works seamlessly. The fact that you likely won’t notice it until I call your attention to it is exactly what makes it so powerful. The surrounds deliver on the bustle of the New York streets and crowds in a jazz club. There’s fine separation here, and it will show off those nuanced abilities of your system … if you have it all calibrated perfectly. If you don’t? You’re going to want to take the time for this one. It’s worth it.

Deleted Scenes: (5:19) There are five with no individual selection option.

Making Of Edward Norton’s Methodical Process: (9:38) This is a bit of a love-fest for Norton as producer, director, and star of the film. He gives a lot of insight into the signature elements of the film. We get some behind-the-scenes footage that provides nice examples of Norton working as both actor and director at the same time.

Final Comment: I based my grade on the excellent storyline, fantastic recreation of the 1950’s style crime-detective films, and the superb acting. Be cautious when deciding to allow immature children see the film, as it does have some scenes that are inappropriate for youngsters.

John Delia has been on all sides of the movie business from publicity, writing for publications and on line blogs, script writing, to film making. Writer, critic, film editor he has worked as a film critic on this second go around for 14 years. He earned his Bachelor’s degree at the college of Journalism and Communications at the University of Florida in Gainesville, Florida. John is an active member of the Southeastern Film Critics Association (SEFCA) . Favorite Films: Lord of the Rings/Hobbit trilogies, The Godfather trilogy, the Indiana Jones trilogy (I didn't like the 4th), The Avengers and for TV it's Game of Thrones. As for animation it's a tie between anything Pixar and everything Hayao Miyazaki.
Doolittle The Addams Family (2019) (Blu-ray)