Posted in: Disc Reviews by Brent Lorentson on November 27th, 2020 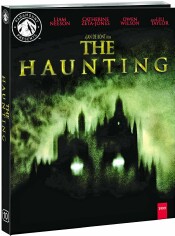 It was over twenty years ago when The Haunting came out.  I remember actually looking forward to this movie, mostly because of its director Jan De Bont, who was responsible for the 90’s summer blockbusters Speed (1994) and Twister (1996).  For the record, I choose to pretend that Speed 2: Cruise Control never happened, because let’s face it, that was simply one of the worst films I’ve ever seen.  To De Bont’s credit, he’s also the cinematographer of some pretty great films as well; Die Hard, Flatliners (the good one), and Basic Instinct, to name a few.  Now another thing that had me excited was where CGI was at the time. The Frighteners had come out in 1996, The special effects in that film were great and they hold up to this day, so really, with a bigger budget, a solid director and cast, this film should have just been amazing.  The result ended up being a film that shows what happens when you rely too heavily on CGI for scares rather than crafting good old-fashioned suspense with atmosphere and story.

The 1999 film is based off the book by Shirley Jackson. Sadly it would take nearly two decades more for the superior Netflix adaption of The Haunting of Hill House to release. While the 1999 version may be closer to the book, what is ironic is that it’s about a paranormal study on fear, yet there is nothing terrifying or scary about this film.  The film follows so many typical haunted house tropes that even Ray Charles would see these “scares” coming.

Dr. David Marrow (Liam Neeson) wants to bring together a group of patients who believe they are participating in a sleep study, but really the good doctor is conducting an experiment of fear upon his patients.  While Marrow’s intentions are unethical and to a degree illogical, what still blows my mind is how he manages to get permission to do the study at this beautiful, enormous mansion. His key patient is the socially awkward Nell (Lily Taylor), the self assured Theo (Catherine Zeta-Jones), and then there’s the goofball, Luke (Owen Wilson) all of whom which suffer from various sleep disorders.  If it wasn’t for the talent in this film, I wonder just how bad this could have been. The performances in this film definitely outshine the quality of the script, and it makes you wonder what could have been if this had a more nuanced script for this cast to work with.

The film’s greatest achievement, though, goes to the amazing sets that were constructed for the film.  When you hear that the sets were so large they needed to be built and stored in the same hangar where Howard Hughes had his Spruce Goose, that should give you an idea of just how massive this set is.  Personally the carousel room is one of my favorites from this film, and it’s a shame it wasn’t utilized more. Still, despite the great sets and the abundance of CGI, the film fails miserably at being scary. This is supposed to be a horror film, and it just keeps missing the mark.

Looking back, one of the most problematic aspects of the film is how the story works out of convenience rather than making much sense.  For instance early in the film one of the assistants to Dr. Marrow is injured by the house and they are able to leave the grounds to get medical attention, but then later in the film when the rest of the characters are trying to flee the house, it does everything in its power to prevent them from leaving.  Basically it’s a moody house that will go from one extreme to the other, but the caretakers of the home seem to come and go as they please despite them knowing the house is haunted and has its secrets. How these secrets are unraveled could easily been explained by involving the caretakers and fleshed out their involvement, but instead the film goes a more absurd route.  That leads me to Nell’s strange connection to the house. Ffor those who haven’t seen the film or are oblivious to its story , don’t worry, I won’t spoil it, but I’ll just say it makes an extreme leap in logic and creates more questions than it does answers.

Perhaps the most intriguing thing about this film is that at one time Steven Spielberg was going to direct this and switched projects with Jan De Bont because an opportunity arose where Spielberg could finally get to work with Tom Cruise.  That project would eventually be Minority Report.  This is one of those “What If?” scenarios where you have to wonder how different this film could have been in the hands of Spielberg or even a De Bont-helmed Minority Report.  The Haunting was a letdown upon its release, and time hasn’t been too kind to the film.  De Bont was able to go on and direct an entry in the Tomb Raider franchise, but really, this film did him no favors, especially following Speed 2.  To be fair, De Bont was not playing in his wheelhouse here, and despite his best efforts with solid camera work, this film should have gone to someone with more experience in the horror genre.

The Haunting is presented in the aspect ratio 2.39:1.  The 1080p image is arrived at with an AVC MPEG-4 codec at an average of 32 mbps.  The video presentation of the film is really nice. The transfer gives a borderline-flawless display.  The movie was shot on film and has a warm color palette despite it being a horror film.  Luke’s baby blue shirt pops in just about every scene where is has it on.  There is a nice golden hue in a lot of the scenes, for instance the carousel room sequence.  What doesn’t translate well are many of the visual FX that just look so dated here. A big for-instance is the ghost under the blankets.  There is a lot of depth and detail in this presentation due to this being shot on film, and the night footage and dimly lit scenes look great.

The Dolby True HD 5.1 track is really on point here.  The sound design is really well done in giving us a sense of space when we are in the house and how the sound travels that gives a slight echo you would expect in a large house with doors slamming and other FX used to make the house creepy.  The dialog is clear throughout.

Director Jan De Bont on The Haunting: (9:14)  A short interview about his experience with making the film and some of its challenges.  Would have liked a commentary discussing the film in more depth.

Behind the Scenes Featurette: (27:12) This is a more in-depth look at the film and its influences.  There is a standard BTS aspect to the featurette, but then it delves into actual haunted houses and other ghost stories before circling back to the production.

I hoped that revisiting this film after so long my feelings would have changed, but I’m still not a fan of this film.  In 1999 another remake House on Haunted Hill came out, and for me that is still the better of the two films.  The cast is still what saves this film along with its beautiful production design.  This one might be good for those who are not so keen on scary films. Basically it’s a haunted house film without the scares or thrills.

Brent Lorentson is a horror writer and film critic based out of Tampa, Florida. With a BA in Digital Film, he co-wrote and co-directed Scavenger Hunt. His short stories have appeared in various horror anthologies. In 2019 his short script Fertile Blood will be a part of the anthology horror film Slumber Party. He is currently working on his first novel A Dark and Secret Place set to be released in late 2019. Favorite Films: Taxi Driver, Fight Club, I Saw the Devil, The Wild Bunch, Dawn of the Dead, A Clockwork Orange, Pulp Fiction, Heathers, The Monster Squad, and High Fidelity.
Coming to America (UHD Blu-ray) (4K) (Steelbook) Top Gun (UHD Blu-ray) (4K) (Steelbook)