Posted in: Disc Reviews by Archive Authors on November 27th, 2020 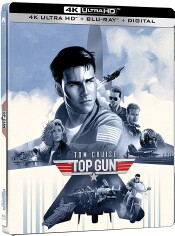 “On March 3, 1969 the United States Navy established an elite school for the top one percent of its pilots. Its purpose was to teach the lost art of aerial combat and to insure that the handful of men who graduated were the best fighter pilots in the world. They succeeded. Today, the Navy calls it Fighter Weapons School. The flyers call it: TOP GUN.”

Back around the time I was born, when Tom Cruise had an ounce of sanity, a little movie called Top Gun swept across the globe, raking in over $350,000,000 worldwide, as well as sparking an interest in the US Navy and everything Tomcat, Skyhawk, and MiG related. Ever since its original release, Top Gun has kept a hold on its audience, being played almost weekly, and now it makes its way into the world of ultra high definition with its release on UHD Blu-ray. The timing couldn’t be any more obvious. The long-anticipated sequel has been in production, and while delayed by the global circumstances, the film will be arriving soon (at least in release terms). This is a pretty good way to get you up to speed, pun intended. The film isn’t alone in cashing in on the Tom Cruise upcoming slate of both the Top Gun sequel and two Mission Impossible films being shot at the same time. This is one of three Cruise films getting the 4K release treatment along with Days Of Thunder and the Spielberg remake of the War Of The Worlds George Pal film. Once the box office returns, you’re going to be getting a lot of Tommy, so these films are intended to put you in the mood and get the party started a little early.

For the few of you out there who don’t know, Tom Cruise (Mission Impossible) plays Pete Mitchell, better known to the rest of us as Maverick. He’s young, cocky, and he pilots an F-14 Tomcat. His wingman, Goose (Anthony Edwards, Zodiac) keeps him in check with a cool head, and is the more cautious of the two. After another pilot turns in his wings, the two are given the opportunity to join the Top Gun fighter pilot school in which only the top 1% of fighter pilots are invited. Upon getting into the school Maverick believes himself to be the best there and borders on the line of being reckless, creating an enemy of fellow pilot Iceman (Val Kilmer, Heat). As the movie plays out Maverick falls in love, contemplates his lifestyle, loses people close to him, and faces death while trying to make it through the training. The movie pretty much wraps up in typical Hollywood style with a bow on it, but still manages to be a good watch.

“I feel the need, the need for speed.”

Back when Top Gun was released, there is no doubt that it was a state-of-the-art look into jets and provided some realistic special effects with a decent story. Since then there’ve been a million and one movies that have looked nicer, but there’s something about Top Gun that keeps it at the top of the aircraft genre. It could be the great cast, or its originality, but at any rate this film is a good watch if you want to see a movie about fighter pilots. At the same time, it’s not a masterpiece that’s going to captivate anyone and everyone, but if you think this type of story is going to appeal to you, you’re going to love its results on UHD Blu-ray.

Top Gun is presented in its original aspect ratio of 1.85:1. The ultra-high-definition 2160p image is arrived at by an HEVC codec with an impressive average bitrate of 60-65 mbps. The original source is, of course, 35mm film, and it’s all native 4K. Those filmic elements really stand out here. The grain is just enough to add something organic to all of this action. Real jets were the Tom Cruise order of the day, as it will be in the sequel, and that also adds such an organic and dynamic element to the film. HDR allows for fiery red jet exhaust tubes, and the detail inside those cockpits can make you downright airsick if you have a large enough 4K monitor. The skies are where the vast vista of the film plays out best, and the 4K resolution takes you right into the sky. The image itself can look 3D at times, providing a surprising amount of depth in some shots. Black levels are nice if not perfect, and there is enough shadow definition to enjoy the film in whatever lighting. Sea and sky take over here, and it’s as good as this film has gotten.

The Atmos track defaults to a rowdy 7.1 mix. It starts out with those wonderful 80’s power ballads that sound crisper here than they’ve ever sounded before. The surrounds give you an almost concert-seat vantage point. The subs just feed off those powerful jet engines, while the surrounds will have you watching your own six as jets appear suddenly behind you and zoom on by. With all of this music and jet wash going on, how the heck could you possibly hear any of the dialog? That’s the master stroke. Just enough surface noise to make it realistic, but not so much that you can’t hear completely. It’s like you’re plugged into those inter-jet coms and part of the team. There are some nice establishment shots of the city. Had I been blindfolded and sat down in front of this movie, there would be no way I could tell that this movie is over 20 years old.

There’s an Audio Commentary with cast and crew. Mostly it’s Scott providing a ton of useful information throughout.

The original extras are all on the Blu-ray copy of the film. The UHD disc does have some extras of its own that are newer and tie in with the Top Gun: Maverick film. Here are those extras. They are not in 4K or HDR.

The Legacy Of Top Gun: (5:39) Tom Cruise and Jerry Bruckheimer talk a bit intimately about the first film and offer deeper insights than are usual here.

On Your Six – Thirty Years Of Top Gun: (29:54) This is a six-part behind-the-scenes feature. You get: Looking Back, America’s Best, Into The Danger Zone, Going Ballistic, Narrow Targets and The Future, which obviously deals with the upcoming film. There’s a lot of then-and-now talk.

The movie itself isn’t going to knock your socks off, but at the time it came out, it probably would have. It still holds a lot of its momentum, and that alone gets a favorable rating from me. The inclusion of a handful of great actors in smaller roles including Tim Robbins, Meg Ryan, Michael Ironside, and John Stockwell only adds to the movies credibility. In the end Top Gun hits 4K with some impressive results, looking and sounding like anything but an 80’s movie. The timing is right here, and even though the future film has suffered from all of these new unknowns, it’s coming out eventually, and this is your homework to make sure you’re prepared. Consider it a prerequisite. I’ll be there when the new one hits the box office. When, you ask? “It’s classified. I could tell you, but then I’d have to kill you.”