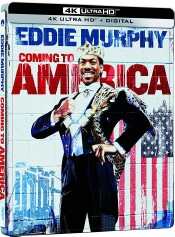 Remember when Eddie Murphy was funny? You know, before the fat suits and fart jokes. I guess many of you hadn’t even been born yet. Ronald Reagan was still president of these United States. CD’s were the latest thing. VHS was just catching on. The Rams were still in L.A., and it was the Cardinals who were playing in St. Louis. No one had ever heard about DVD, Blu-ray, 4K, MP3, or Wi-fi. It was 1988, and Eddie Murphy was staring in Coming To America. This is the second of two classic 80’s Eddie Murphy films that Paramount is delivering on UHD Blu-ray this week. They happen to be two of his best films in 40 years. I’ve long considered this the last funny Eddie Murphy film. It just seems like he’d turned to gimmicks and quick physical humor. He got lazy, and you know what? So did I. I decided it wasn’t worth the effort to get my seat into those theater seats to see him clown around anymore. So journey with me back to a magical time when Murphy was still hungry and he let his talent shine.

Prince Akeem (Murphy) has come of age. He’s lived the good life where he has wanted for nothing. His Father (Jones) is king of their African country, and all is good. He even has chicks to wipe his butt for him. Yet he yearns to discover the real world. And so, with his right hand man Semmi (Hall) in tow, he seeks to sow his wild oats in America. From the moment he lands in Harlem, the fish-out-of-water story begins. He finds a crummy apartment and has all of his belongings stolen. He’s in search of his future queen, but doesn’t want to win her over with his title. He pretends to be poor, and the two take a job at McDowell’s, a blatant restaurant rip-off of McDonalds. There he meets owner Cleo McDowell (Amos), and more importantly, his lovely young daughter, Lisa (Headley). He tries to impress both father and daughter with mixed results, while Semmi is trying to get out of living in such squalor. When the parents arrive on the scene to put an end to this nonsense, they discover their son’s in love.

It’s a pretty simple and contrived story, but this was back in the day when Murphy could steal the show. Shades of the future Murphy did begin here. He played multiple parts, mostly under tons of latex makeup. Arsenio Hall also plays several parts in the film. But the best part of it is the characters and the actors who play them. They’re all at the top of their game here, and the story soon becomes almost irrelevant to the chemistry and performances of John Amos, Eddie Murphy, Arsenio Hall, James Earl Jones, and Madge Sinclair. This film was made entirely in the casting.

Coming To America is presented in its original aspect ratio of 1.85:1. The ultra-high-definition 2160p  image is arrived at by an HEVC codec with an impressive consistent bitrate of 60. This film shows far more improvement in ultra high definition than Beverly Hills Cop. The African colors are exceptionally bright for the aged film, and the New York material keeps that dark and dirty appearance. Close-ups reveal maybe too much of the makeup used on Murphy and Hall for the various other characters they play. It still holds up, but the edges show a little. I’m not sure that’s a bad thing, because the whole thing is kind of a wink and never intended to fool anyone. Black levels are rich and deep. The HDR gives just a slight bump in the colors and even more in the film’s contrast.

The Dolby Digital 5.1 track is really just there to serve dialog. A little surprising they remixed this one and gave it the extra surround space at all. It sounds relatively good. Some of the effects do sound a little forced, but a really solid effort. It’s clean, and that’s really all you can hope for from a 1980’s comedy. Nothing new here.

The extras are all on both the UHD and the Blu-ray copies of the film.

Prince-ipal Photography: The Coming Together of America: (24:38) This serves as the behind-the-scenes of Coming to America and goes a great into depth about the movie; how it got started and the work done to get the movie onto the Hollywood screen. John Landis, the director, is the main focus here, as he is extremely candid and entertaining regarding the flick.

Fit for Akeem: The Costumes of Coming to America: (18:03) This featurette focuses on the all of the various dress that the characters employed during the production of the movie, primarily the native African garb that is worn in the beginning and tail end of the film. This one spends a lot of time with the director’s wife Debra, who handled the costume design.

Character Building: The Many Faces of Rick Baker: (12:54) Makeup Artist Rick Baker is the main focus for this featurette as he shows all the work that took place in order to transform Eddie Murphy and Arsenio Hall into all of the fun characters that we laugh at during the flick. Of particular interest, the old Jewish white guy in the barbershop that Eddie portrays.

Composing America: The Musical Talents of Nile Rodgers: (11:08) Remember the Reflex by Duran Duran? Well, the songwriter behind that and many other catchy hits did the soundtrack to Coming to America. That man was Nile Rodgers (who looks way too similar to Rick James). This takes a great detail to go over the music that I barely noticed through most of the flick (except that annoying theme song).

A Vintage Sit-Down with Eddie & Arsenio: (5:36) This footage had not been seen in almost 20 years, and it is a very candid conversation with Eddie Murphy and Arsenio Hall. This is the Eddie reminiscent of his standup and Beverly Hills Cop movies. They talk about the concept behind the film and some of the parties that happened during production. Those parties … you know the ones. This movie was originally called The Quest, as a nice tidbit of trivia. Wasn’t that a Jean Claude flick?

Classics do need to be revisited every so often. To make sure we still laugh, and make sure that it holds the story that it once presented. Coming to America is still funny after all of these years. One last note in the great cameo department; Samuel Jackson holding up the McDowell’s. It’s easy to see where his Pulp Fiction mannerisms come from. Just in time for the sequel this UHD isn’t going to give you anything extra, but it’s a good time to upgrade if you hadn’t gotten it in Blu-ray earlier. “No journey is too great when one finds what he seeks.”

Parts of this review were written by Michael Durr

Gino Sassani is a member of the Southeastern Film Critic's Association (SEFCA). He is a film and television critic based in Tampa, Florida. He's also the Senior Editor here at Upcomingdiscs. Gino started reviewing films in the early 1990's as a segment of his local television show Focus. He's an award-winning recording artist for Omega Records. Gino is currently working on his 8th album Merchants & Mercenaries. Gino took over Upcomingdiscs Dec 1, 2008. He works out of a home theater he calls The Reel World. Favorite films: The Godfather, The Godfather Part II, The Body Snatcher (Val Lewton film with Karloff and Lugosi, not the pod people film), Unforgiven, Gladiator, The Lion King, Jaws, Son Of Frankenstein, The Good, The Bad And The Ugly, and Monsters, Inc.
Beverly Hills Cop (UHD Blu-ray) (4K) Paramount Presents: The Haunting (Blu-ray)