Posted in: Disc Reviews by Gino Sassani on December 11th, 2020 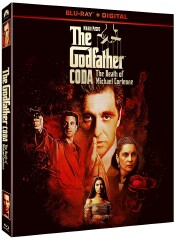 “Our true enemy has yet to reveal himself.”

If anything, the third part of the Godfather series of films is symbolic of when too many sequels are greenlighted, and consequently, the film is doomed to fail. More often than not, the reason why these films crash and burn is because of major studios acting like Adelphia executives and wanting more money, and in using the previous films’ successes as leverage, they lose sight of things like quality. It’s happened to other trilogies. And if you put together previous films with the reputation that the first two Godfather films have, the only question left to answer is whether or not the third film would be a minor or major letdown. Most of the essential players returned, with the exception of Robert Duvall. (Duvall said Francis Ford Coppola never really negotiated with him, while Coppola says that Duvall asked for more money, so who knows?) Mario Puzo helped out with another part of the story, so why did this film not live up to the hype?

Francis Ford Coppola thinks he knows why the film failed. He claims that it was never intended to be a third part of the story but merely a coda to the franchise. That’s where the title of this re-mastered and re-edited version of the film fits in. Coppola claims that Puzo and himself had always wanted the film to be called The Godfather Coda: The Death Of Michael Corleone. The studio insisted on the version and title that was released in 1990, and that’s why it failed. The purpose was merely misunderstood. Now I’ve watched the re-edit, and while it does improve the film a bit, all of the issues remain.

Well, this is by no means a slap to Coppola and Puzo, but the story was too nostalgic. A good portion of the film was told with clips from the other movies. While understandable, it didn’t address some of the performances from the cast. Pacino’s performance was pretty good and more subtle than I first remembered, and Andy Garcia’s role as Vincent (Sonny’s bastard child) still stands up after these years too. But Talia Shire as Connie clearly is the evil mastermind behind a lot of the Corleones’ present activities in an underappreciated performance. And in considering the evolution of her character from Part 1 to Part 3, her transformation was a little more gradual, but on par with Michael’s. Shire definitely deserves more praise than she got in this series. On to the bigger question: did Sofia Coppola as Michael’s daughter Mary really stink up the joint in this film? Of course she did. As long as she remains, the film will never match that of the first two. Her 30 year career following this film sure proves the point. She wisely left acting and went into directing and producing. Filmmaking is in her genes. Acting maybe not so much, Nicolas Cage and Talia Shire exempted, of course.

So what does change, you ask? The beginning is completely reworked. Gone, at least for the most part, is the long-winded letter from Michael to his children. That means the killing of Fredo is also no longer included in the film. Instead the film does wisely begin with Michael’s meeting with the archbishop to donate $6 million for their share in the big international conglomorate. That serves two very fine purposes. Firstly, it takes us into the real meat of the story from the start. Secondly, it marries it much better to the first two films. Who can forget that Godfather opening where Brando is being asked for favors? It happens again in Part II with the senator. Now this film opens with Michael posing much like Brando, listening to the archbishop’s story. There’s no question this was a very strong change. The rest not so much. Because a lot of the intro is cut, we meet Andy Garcia as Vincent sooner, and again we get to those important elements with some swift pacing. The rest is just a few different takes or edits. The music cues change, some for the better most unnoticeable. I like that there are now subtitles during Tony’s playing and singing the main theme. Now we know the song’s meaning, and it makes for some better understanding. Of course, even the stronger intro isn’t as effective for me, because I already have it ingrained the original way. I would have loved to have seen this film for the first time with the new intro. The changed ending is disappointing. We still see aged Michael in his chair futzing with his sunglasses, but we no longer see him die. Instead a quote is placed on the screen that’s much worse than the original ending. We go all this way to call this thing The Death Of Michael Corleone, except now we don’t see him actually die. Sorry, Francis. I give you tons of props for the new beginning, but a big fat zero for the new ending.

The Godfather Coda: The Death Of Michael Corleone is presented in its original aspect ratio of 1.85:1. The 1080p image is arrived at with an AVC MPEG-4 codec at an average 20 mbps. This is a very nice high-definition image presentation, delivering in almost every way. Because of the length of the films ,the bit rates are down around the low 20’s mbps, but that doesn’t seem to keep the image from delivering the goods. This is an almost perfect rendition of the film. The brilliant cinematography is evident in every frame of this restoration. There is plenty of the soft washing grain that was always intended in this film. The yellow and red texture of the film remains just as it was always intended to appear. Dark scenes are incredibly dark. You lose detail here as objects disappear into near total blackness, just as it was intended to do. What shines most here is the level of detail that was never possible at home before. Black levels are strong in their presence, but not full of the detail you’ve come to expect in a modern HD release. Again you have to realize that everything you are seeing here is intended. The reproduction is outstanding.

The Dolby Digital TrueHD 5.1 Master Lossless Audio delivers in ways you simply have to hear to believe.  I was glad that there wasn’t an effort to create an overly aggressive surround mix, since that’s not the way the film was released. Most of it happens up front, and that suits me just fine. Dialog is fine and always perfectly placed. What makes this a winner is the presentation of the fabulous score. From the first trumpet theme to the delicate strings of the closing credits, the music shines through as powerfully as ever.

Just an intro from Coppola that is identical to the trailer they released for the new version.

I own the Godfather films in all of their home-video-for-television formats. I have the old CED video discs, Laserdisc, VHS, DVD, and now the Blu-ray version of the film. As much as I’ve enjoyed these films over and over again, it’s almost as much fun to look at the evolution of home entertainment with these films. The first wide version was the CED release. The laser was only the trilogy presented in chronological order as it was done on television. It was full frame but included many of the deleted scenes incorporated back into the film. I’ve also seen them in the movies. Except for III, I was too young to remember the nuances of the films from those early 1970’s release dates. All I remember is that I fell in love with them then and have continued to treasure them today. I expected a 4K before this re-edited version of the least popular film. But I always fall for some kind of viewing/release of a Godfather film. “Just when I thought I was out, they pull me back in.”

Gino Sassani is a member of the Southeastern Film Critic's Association (SEFCA). He is a film and television critic based in Tampa, Florida. He's also the Senior Editor here at Upcomingdiscs. Gino started reviewing films in the early 1990's as a segment of his local television show Focus. He's an award-winning recording artist for Omega Records. Gino is currently working on his 8th album Merchants & Mercenaries. Gino took over Upcomingdiscs Dec 1, 2008. He works out of a home theater he calls The Reel World. Favorite films: The Godfather, The Godfather Part II, The Body Snatcher (Val Lewton film with Karloff and Lugosi, not the pod people film), Unforgiven, Gladiator, The Lion King, Jaws, Son Of Frankenstein, The Good, The Bad And The Ugly, and Monsters, Inc.
Collateral (UHD Blu-ray) (4K) Words On Bathroom Walls (Blu-ray)