Posted in: Disc Reviews by Brent Lorentson on December 12th, 2020 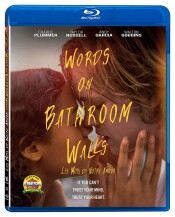 When you check out the poster and Blu-ray cover art for this film, you could easily think that this was yet another cheesy teen romance, but the film is something else entirely.  There is a bit of teenage romance in the film, but mostly the focus is on the mental health of the film’s protagonist, Adam (Charlie Plummer) and his struggles with schizophrenia.  It’s a heavy topic, and somehow the film manages to tackle the topic in an honest way without being overly depressing.  This was challenging material, especially when your target audience is under the age of 18, and during the time of COVID, it’s a bold move for a studio to put out a film with this kind of heavy subject matter.  I didn’t expect to like this film, if I’m being honest, and I’ll happily admit that the film surprised me. That doesn’t mean that the film doesn’t come with its share of problems, but are they enough to discourage someone from checking out this film?

The story is told to us by its protagonist Adam in a way where it seems as though he’s talking to his therapist, but we never see this person, so it may have been better if he were just speaking to the audience, since the perspective has him talking to the camera in a medium shot during these sequences.  He introduces us to his condition, and we see the situation unfold that had him removed from his school, basically an accident during class that resulted in his friend getting a bad burn.  This should have been a tragic and traumatic scene, but it comes off a bit silly when we see one of the personalities he sees, the bodyguard, go and fight a bad CGI black whirlwind that creates the chaos in the classroom.  It’s early on with this scene and every scene involving this “dark cloud” where I feel director Thor Freudenthal was the wrong choice for this project. Sure, he may have experience and success with doing family films like Diary of a Wimpy Kid, but this film needed to be a tad darker in tone and, well, the ending of this film is just absurd and basically craps over all the realness most of the film presents.

Now that I got my major gripes out of the way, let me get to what works in this film.  While Charlie Plummer carries the bulk of the film, it’s the cast that surrounds him that makes this a well-rounded drama. The friendship with his classmate, Maya (Taylor Russell) is what a lot of the film is about, but I found the relationship between Adam and his mother, Beth (Molly Parker) to be the more emotionally engaging.  Adam and Maya’s friendship works even if it seems like a familiar narrative, but it’s the chemistry between Adam and Beth that felt more real.  Beth is doing everything she can to find help for her son, and when an experimental drug comes along, we can feel relief for Adam and for Beth because we can see what she’s given up just to try and help her son. When Beth starts dating Paul (Walton Goggins), I have to admit I was a bit peeved by Adam’s reaction.  It’s here where I felt the film excelled, where it wasn’t afraid to show the protagonist, someone we should sympathize with, being a total selfish brat and have him do things like going off his meds.  Having Adam do these things made him feel more real and reminds us we all make mistakes.

Then there is the relationship between Adam and his imagined personalities he sees.  Fight Club tackled it best when it comes to characters interacting with people who are not really there, There are moments where we almost got to see how terrifying it can be to have schizophrenia, but there always seemed to be a level of restraint with these moments.  There are three main personalities, The Bodyguard, The Pervert, and The Hippie, and they serve their purpose for Adam to use them for coping in certain situations, but there is nothing dynamic about them. They’re so generic that they basically just seem like one-note jokes, so we can of course understand why Adam would want to get rid of them.  Even when they all are reacting to one another, it just felt weak.

As for Adam and Maya, this really should have just been treated as a friendship. Forcing the romance just seemed too much when the film already had enough side stories. For a kid who seems to be obsessed with cooking and his dream of becoming a chef and how this experimental medication may make this dream impossible, this is enough motivation for him to struggle with the meds. In a book there is more time to flesh out more stories, but in a film you need to be more focused. Just seeing him suddenly trembling to where he can’t use a knife on a cutting board or when he loses his ability to taste, these are legit reasons for why he would want to stop taking the meds, bur when it seems to be more about the girl, that just didn’t sit right with me considering how long Adam has had this passion.  Other things become problematic with his decision making, but at some point as a viewer you have to remind yourself it’s only a movie.

The film tackles some serious subject matter and manages to be entertaining and heartfelt, which is more than I expected from this film. It’s nice to see that studios are willing to take chances with films like this, but it does seem it was trying to piggyback on the success of The Fault in Our Stars and Five Feet Apart.

Words on Bathroom Walls is presented in the aspect ratio 2.39:1.  The 1080p image is arrived at with an AVC MPEG-4 codec at an average of 20 mbps.  The overall look of the film is a bit bland, and when some of the CGI FX are added, it seems to give the film a cheaper look.  The film is a tad over-lit, something you see more in comedies, and this gets in the way when we are seeing some of Adam’s more creepy visuals.  I didn’t notice any compression issues, and the black levels are a bit unremarkable as well.

The  DTS-HD Master Audio  5.1 track is a bit more impressive mostly because the sound design utilizes the surround sound and bass when it comes to the voices Adam is hearing.  We definitely get a sense of disorientation, which helps us with getting into Adam’s perspective.  The rest of the audio parts come through nice and clean with the front speakers carrying the brunt of the work with all the dialog.

If you are a sap for teenage romances and enjoyed The Fault in Our Stars or A Walk to Remember, then this is a film that is in your wheelhouse.  I enjoyed this more than I thought I would, but I still feel in the hands of a different director and with a slightly darker tone this could have been a better film.  This is a film that seems appropriate for this time of year, especially if you’re looking for a feel-good movie for the whole family.

Brent Lorentson is a horror writer and film critic based out of Tampa, Florida. With a BA in Digital Film, he co-wrote and co-directed Scavenger Hunt. His short stories have appeared in various horror anthologies. In 2019 his short script Fertile Blood will be a part of the anthology horror film Slumber Party. He is currently working on his first novel A Dark and Secret Place set to be released in late 2019. Favorite Films: Taxi Driver, Fight Club, I Saw the Devil, The Wild Bunch, Dawn of the Dead, A Clockwork Orange, Pulp Fiction, Heathers, The Monster Squad, and High Fidelity.
Mario Puzo’s The Godfather, Coda: The Death of Michael Corleone (Blu-ray) The Beach House (Blu-ray)