Posted in: Disc Reviews by Gino Sassani on December 17th, 2020 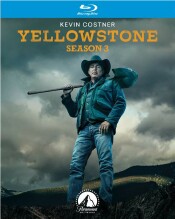 “Chances are if you are watching Season 3 you like it.”

Kevin Costner plays John Dutton. The name itself recalls those years as a kid watching the myriad western shows that crossed our television screens throughout the 50’s and 60’s. He’s the owner of Yellowstone Ranch, which takes up hundreds of square miles and borders on the national park of the same name, which we never do get to see. What we do see are the other borders of the Yellowstone. It borders a large and mostly impoverished Native American reservation. The ranch has apparently existed with an uneasy peace with the residents of the reservation. But there is a new chief in town. He’s Thomas Rainwater, played by Gil Birmingham. Rainwater has some kind of a grudge that we never got to completely understand in the first season. He’s a political beast who has turned Dutton and his ranch into a common enemy to fuel his own popularity and ambition.

All of this takes place in the open ranges of Montana, where the Yellowstone Ranch looks very much like the fabled Shiloh of The Virginian. There’s the big mansion where Dutton and some of his family live and the bunkhouse where the cowboys who work the cattle sleep, play cards, eat, and fight. Looking over the scenery, one can almost imagine you were back in the days of the untamed frontier. That is until the helicopter swoops into view. John Dutton might have some old-fashioned ideas of how to make a living, but he’s a rich man who uses modern technology when it serves him. The ranch helicopter is the one concession to the modern age.

Dutton considers himself a kind of god here. He rules the ranch with a brutal and iron fist. Being fired from Yellowstone isn’t quite like leaving a job at the mall. There’s also a caste system much like that found in the early days of the mafia. Dutton believes that people who have reached the bottom of their lives will be loyal if he becomes their savior. He recruits these “lost” souls into his ranch and its inner circle. But there is a price to be paid to join this elite group. You are branded with the same iron that is used on the cattle. That brand means no one else can touch you, and you’re a part of the ranch family for life. It’s like being made in the mob. Rip, played by Cole Hauser, is one of those lost souls that Dutton “saved” as a child. Now he’s his right-hand man and has grown fiercely loyal to the ranch. He’s not above breaking the law to do what it takes for the ranch.

Like Ben Cartwright, Dutton is a widower who lost his wife to an accident when his kids were still very young. His children are now grown and have their own kind of lives, but they are never completely out of the family business. These are the characters that bring the real drama to Yellowstone, where it becomes more like Dallas than Bonanza. There’s a lot of stubbornness in his children, and it poses more of a challenge for Dutton than the local reservation trying to steal his cattle and provoke a war.

Kelly Reilly is Beth Dutton, the only girl in the family, stronger and far colder than any of the sons. She is a corporate raider by profession. This season that will come in handy. With the Beck Brothers gone, the new threat is a corporation who wants to have the government sieze the ranch land to build an airport and eventually a full city. It requires some political know-how, and Beth ends up the most effective fighter.

Kayce Dutton is played by Luke Grimes and is one of the more compelling characters in the series. He didn’t want any part of the family business, and like Michael Corleone, finds himself dragged into the conflict. He lived on the reservation with his Native-American wife and their son. She has left him because of his family. But there is a fierce love still there. Dutton brings him back by making him the ramrod, and that puts Rip’s loyalty to the test. Like Michael Corleone, Kayce is now being groomed to one day be the “boss” of the family business. Last season his son was kidnapped by skinheads helping the Beck Brothers. Now he’s forced to play the political game as the Livestock Commissioner for the state and finds he can actually help people.

Jaimie Dutton is played by Wes Bentley, and John tries to give him power to help the family get through this new attack. He ends up the state’s Attorney General. But he discovers a secret to his own background that pushes him away from the family and a potential new enemy. We also learn through flashbacks why Beth hates him so much.

In the life of the hands, the best and most prominent continues to be Jimmy, played by Jefferson White. Jimmy is an awkward character who can’t seem to fit in and appears destined to play the part of the “low” man for the rest of his life.  Jimmy gets a lot to do this season. He gets a girlfriend named Mia, played by Edin Brolin. But his rodeo choices lead to disaster. In fact, it’s a bit extra-heavy on the romance this season. Beth and Rip get much closer and volatile.

The stand out is Lloyd, who is played by Forrie J. Smith, who himself was a rodeo man and cowboy for 50 years. He lends the greatest bit of authenticity here and is just becoming a compelling personality.

The season is the first to end in a huge cliffhanger. It’s a huge one, to be sure. It’s like something out of a Godfather film as someone comes after the Duttons very hard. We don’t know who is alive or dead by the time it’s over.

Each episode is presented in its original broadcast aspect ratio of 2.00:1. The 1080p image is arrived at with an AVC MPEG-4 codec. This is a beautifully shot series. The open ranges look quite impressive in this high-definition image presentation. There’s absolutely a movie quality that pretty much all shows claim to have, but truly exists here. There’s a lot of texture to be found in the horses and dirty clothes of the cowboys. Colors are rather bright and realistic. Flesh tones are pretty much reference, and I can’t help thinking what this might look like in 4K. Black levels are also nice. Paramount doesn’t load the discs up with too many episodes, so you get respectable bit rates and no compression issues. This is the kind of thing that looks so much better on disc than it ever could through a video stream.

The Dolby Digital TruHD 5.1 track is a bit odd. Few discs are using this format anymore. It’s a nice mix. Not particularly aggressive, but it has its moments, particularly when the helicopter is being used. Otherwise this is a very dialog-driven show, and there’s some nice sub leaking into the dialog so that there’s some depth and authority there. The music is mostly subdued.

Behind The Story: Each episode as a 5-9-minute behind-the-scenes feature that looks at that particular episode. There are plenty of cast and crew interview clips as well as too many clips from the episode you just watched.

There is also a collection of several features with a total running time of over three hours. There’s a play-all option, but 90% of this stuff was already in the smaller features. You get some deleted scenes, and the best feature is the Stories From The Bunkhouse, where three of the ranch hand actors talk about each episode over a poker game.

We’re a visual people, so most of you will recognize Taylor Sheridan from his role as a deputy chief of police in Sons of Anarchy when the controlled puppet regime had finally left the scene. It’s not a remarkable role, and it’s not a complete surprise that Sheridan found his calling more recently behind the camera. As a writer, his first script did hit it out of the park. Sicario is an awesome film populated with compelling and interesting characters who thrived on a broken system. That theme appears to have stuck with him, because the first season of Yellowstone appears to take us back in time to the days of open frontiers and cattle barons who struggled to keep their land amid lawless communities and raiding parties of American Indians who were portrayed as savage beasts who kill women and children in the middle of the night to become shadows of nightmares and the stories told to keep children in line. These themes are all there, but it takes place in a modern 2020 setting that does indeed make for an interesting new twist on an old idea. This is the dawning of the modern western, where lands still stretch for miles and are still owned by a single family. It’s Bonanza in the 21st century, and Kevin Costner thought enough of the idea to star in this television drama series for The Paramount Network. With productions being shut down, you might be asking if there will be a Season 4. “It’s 100% happening.”

Gino Sassani is a member of the Southeastern Film Critic's Association (SEFCA). He is a film and television critic based in Tampa, Florida. He's also the Senior Editor here at Upcomingdiscs. Gino started reviewing films in the early 1990's as a segment of his local television show Focus. He's an award-winning recording artist for Omega Records. Gino is currently working on his 8th album Merchants & Mercenaries. Gino took over Upcomingdiscs Dec 1, 2008. He works out of a home theater he calls The Reel World. Favorite films: The Godfather, The Godfather Part II, The Body Snatcher (Val Lewton film with Karloff and Lugosi, not the pod people film), Unforgiven, Gladiator, The Lion King, Jaws, Son Of Frankenstein, The Good, The Bad And The Ugly, and Monsters, Inc.
The Beach House (Blu-ray) The Dark and The Wicked (Blu-ray)