Posted in: Disc Reviews by Gino Sassani on January 29th, 2021 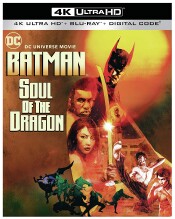 “The door to destiny is always open, for those who are brave enough. Now shut the door before you let the heat out!”

Cartoons are now called animated features, and just like the comic books that provide the source material for these DC Universe animated features, they haven’t been for children since the 1970’s. The latest and 40th entry into this animated series is Batman: Soul Of The Dragon. It’s rated R, which means some pretty rough language and a few surprisingly chilling scenes. So while the film itself will bring you back to the 1970’s in so many ways, this is strictly a modern-day animated film inspired by more modern-day comics. Most of these features are based on established comic story arcs, but this one is completely original, even if it borrows heavily from many sources including more recent Batman adventures. If you are old enough to remember many of the iconic elements of the 70’s, this film is for you. And that means you ain’t no stinkin’ child.

The film digs deep into the very early days of the Bruce Wayne/Batman (Giuntoli) character. When a man named Richard Dragon (Dacascos) shows up at Wayne Manner for help, it releases a flood of memories for Bruce and sends us on a series of flashbacks to the days just before Batman would appear on the scene. For those who haven’t followed the character origins beyond the oft-depicted murder of his parents, this is indeed a treat. Bruce spent years traveling around the world to study with the great masters of the time. One of these was O-Sensei (Hong) in an isolated mountaintop. There he studied martial arts and the discipline these arts demand. It was there that he met Dragon, and now this face from the past has arrived seeking help. A gateway has been taken by a terrorist group called the Kobra Cult. Through eventual flashbacks we learn that it’s a gateway for an evil demon trying to make his way to Earth.

To accomplish this mission, the two are getting the old band back together. This includes a collection of DC/Batman Universe characters that Bruce studied with back with O-Sensei. The first stop is Lady Shiva (Hu),,who was entrusted with a mystical sword called Soul Taker. The sword is taken from the comics, where it was the weapon of a character named Katana. Her husband’s soul was inside the sword, and she would talk to him/it as she battled. Those origins are discarded, but the sword’s power remains, and it’s a key to opening the gate. Unfortunately, they arrive too late, and the Cult now has the sword.

Next stop Ben Turner, also known in comic circles as The Bronze Tiger (White). Now the quartet must stop the bad guys from releasing the demon.

This feature wasn’t taken directly from a particular comic arc as were many of these features. Instead the film captures many elements from the Batman mythology and fuses the whole thing into quite a nostalgic look at the 1970’s. The opening scene is a direct homage to James Bond. Dragon is on a mission, and we get that 60’s Bond/spy music and then an opening credits scene that looks very much like those stylish Bond credit scenes. So much for the 1960’s. We then move solidly into the 1970’s, capturing iconic elements of 70’s cinema. Of course, the martial arts films started by Bruce Lee can be felt throughout. It’s no accident that Dragon looks more than a little like the tragic martial arts film star. Once Ben Turner joins the group, we mix in a little of the 70’s blacksploitation films. Turner talks like a character straight out of Shaft, Superfly, or Dolemite. It’s likely no coincidence that the character is voiced wonderfully by Michael Jai White, who stared in the blacksploitation spoof Black Dynamite. You can tell the showrunners grew up on those times just as I did, and the animated feature opens a floodgate of nostalgic moments for me. They use these elements in a loving homage kind of way so that it’s surprisingly never over-the-top and often alludes to very specific and iconic moments from the times. After the Bond intro, the soundtrack sounds like it was lifted from any of a number of these films, providing a nice kind of fusion between the 70’s pop scene, the martial arts invasion, and the blacksploitation films. For sheer atmosphere, this might be my favorite of these animated features yet.

Batman: Soul Of The Dragon is presented in its original aspect ratio of 1.78:1. The ultra-high-definition 2160p  image is arrived at by an HEVC codec with an impressive average bitrate of 65-70 mbps. Color and texture combine to create the atmosphere and style of this film. They have even captured the look and feel of 1970’s animation, and it stands out in this ultra-high-definition image presentation. Colors are often bold and bright. The HDR provides us with a 70’s explosion of vivid colors and even textures. Black levels are strong, and the animation is razor-sharp with beautifully rendered artistic lines. For about 84 minutes I was immersed back into another time and place where comic books were just entering into my life.

The DTS-HD Master Audio 5.1 doesn’t provide quite the pop that an Atmos track would have provided here. Not sure why the downgraded audio presentation. It is identical to the Blu-ray presentation, which is rather nice for a high-definition release but slightly disappointing in a UHD release. With that said, the dialog is the most important element here, and that’s going to come through just fine. I guess the thinking is that there’s where the audio meat is going to be, so why duplicate the effort? The surrounds are reserved for the action sequences. The subs give the most bang for the buck during those sequences. You get a better sense of depth and fullness that helps to give substance to the animated images. There are some nice music cues that help with the 70’s theme and a nice resonating deep sound provided by the huge door knockers as Bruce finds his way to the training grounds.

Batman: Raw Groove: (30:30) The group of speakers here range from historians to the film’s production crew. It’s a very nice look at the time period and those specific genre connections that the film makes. There’s a nice segment on the foley work and sound design. While there are certainly aspects of the film covered here, it’s the culture and texture of the time period that is most explored.

Producer Jim Krieg’s Far-Out Highlights: (18:03) You get some animated storyboards and a closer look at the comic book origins of the film. Still a lot on the 70’s here.

Sneak Peek At The Next Animated DC Universe Movie – Justice Society: World War II: (8:07) I love these little looks at the next film. We get behind-the-scenes material with the voice cast as well as some scenes to whet our apatite for the next film.

There are re-used sneak peeks at already released films and a couple of episodes of Batman: The Animated Series.

The 1970’s were the stuff of my formative years. It always bothers me that the decade is remembered mostly for disco and loud clothes. Disco didn’t really dominate until the last years of the 70’s, and there was some great classic music filling the early and middle years. Cinema is also often misrepresented. Yes, there were these wonderfully entertaining genres, but it was also the decade of The Godfather, Jaws, and The Exorcist. As contrived as these martial arts and blacksploitation films might appear today, they were sheer entertainment. They weren’t intended to do anything more, and they didn’t pretend to be. I love how this film takes me back to those days in such a playful yet respectful way. To the young audience it might appear too stylish, but to my generation, it’s pure gold. “You’re about to enter a world of hurt. I’m going to enjoy this.”

Gino Sassani is a member of the Southeastern Film Critic's Association (SEFCA). He is a film and television critic based in Tampa, Florida. He's also the Senior Editor here at Upcomingdiscs. Gino started reviewing films in the early 1990's as a segment of his local television show Focus. He's an award-winning recording artist for Omega Records. Gino is currently working on his 8th album Merchants & Mercenaries. Gino took over Upcomingdiscs Dec 1, 2008. He works out of a home theater he calls The Reel World. Favorite films: The Godfather, The Godfather Part II, The Body Snatcher (Val Lewton film with Karloff and Lugosi, not the pod people film), Unforgiven, Gladiator, The Lion King, Jaws, Son Of Frankenstein, The Good, The Bad And The Ugly, and Monsters, Inc.
Snowpiercer: The Complete First Season (Blu-ray) Doom Patrol: The Complete Second Season (Blu-ray)